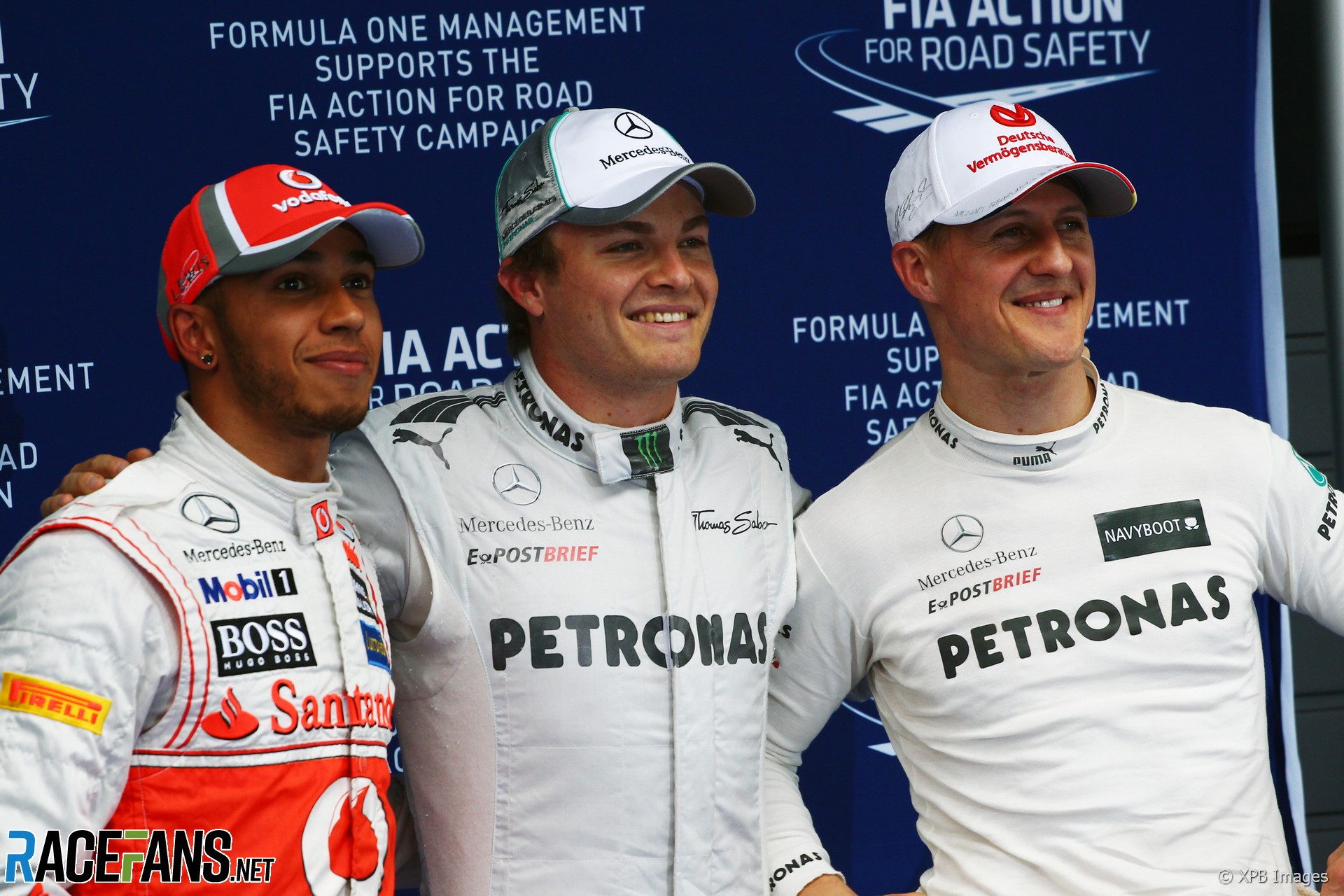 Nico Rosberg made history by claiming his first pole position in qualifying for the Chinese Grand Prix.

He put Mercedes at the front of the grid for the first time since Juan Manuel Fangio led the field at Monza in 1955.

Michael Schumacher will start alongside him – he qualified third but second-placed Lewis Hamilton will take a five-place penalty.

Mark Webber was the quickest of the runners on the medium tyre in the first part of qualifying, ahead of the McLarens of Jenson Button and Lewis Hamilton.

But many drivers found significant lap time improvement on the soft tyre – so much so that Button left the pits on a set in case his place in Q2 came under thread.

Sergio Perez ended the session fastest ahead of Fernando Alonso and Romain Grosjean, all on softs.

Vergne was joined as usual by the Caterham, Marussia and HRT drivers.

Last year in China the shock result of qualifying was Webber’s elimination in Q1. This time it was Vettel’s turn to be knocked out early as he failed to progress beyond Q2.

It began with a strong effort by Fernando Alonso to get the Ferrari into Q3. His 1’35.982 sneaked him ahead of, among others, Vettel.

Most drivers did two runs during the session including both Red Bulls. But while Webber set the fastest time of the session with a 1’35.700, Vettel was 0.331s slower than his team mate.

Incredibly, that slender gap was the different between being fastest and, in Vettel’s case, not making it into the final ten.

He was eliminated along with Felipe Massa, the Williams and Force India drivers, and Daniel Ricciardo.

Romain Grosjean had to abort his first effort in Q2 after a mistake at turn 12. He recovered with a final effort to join his team mate in Q3.

The Mercedes duo plus Raikkonen and Hamilton were the first drivers on the track – and Rosberg set a stunning pace. A lap of 1’35.121 put him at the top of the times – and after that he got out of the car and didn’t make another attempt.

Back on track Hamilton and Schumacher tried to find the half-second between them and Rosberg but neither of them could get any closer.

Kamui Kobayashi showed Sauber had made progress with their one-lap pace by claiming fourth – which will become third after Hamilton’s penalty is applied.

The McLaren driver will fall to seventh behind Raikkonen, Button and Webber.

Several drivers struggled to improve as the temperature fell during the final session, and most posted slower laps or aborted their final runs.

Perez, Alonso and Grosjean complete the top ten – the latter choosing not to set a time.