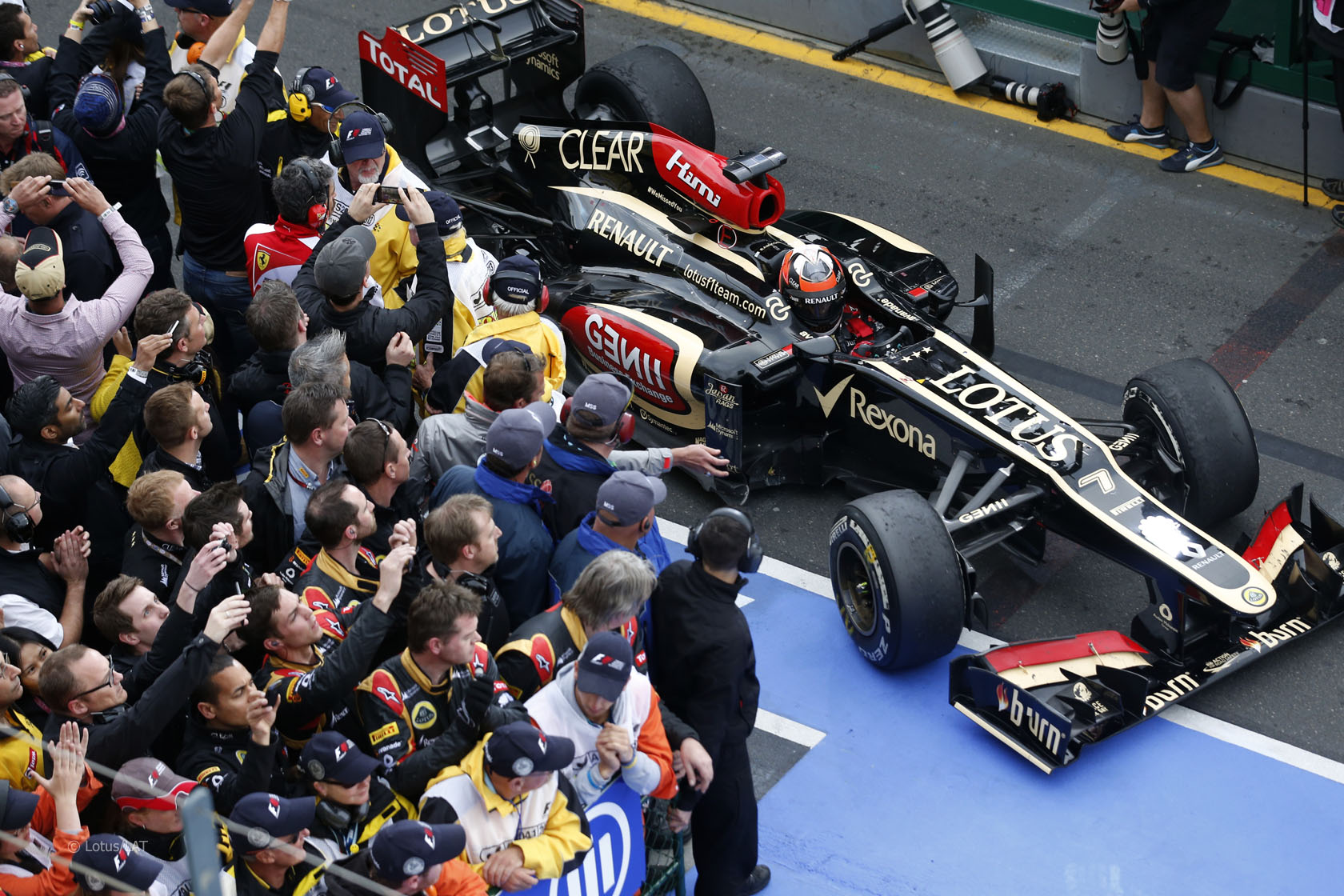 Kimi Raikkonen and Lotus kick-started their 2013 campaign with a victory in Melbourne. But they never recaptured that high and problems off the track saw Raikkonen leave the team before the end of the year.

Raikkonen exploited the E21’s kindness to its tyres to full effect after passing Hamilton, pitting twice while most of his rivals made three stops. But that was to be his only win of the season: a similar opportunity presented itself in Spain but this time Fernando Alonso got the better of him and Raikkonen lost too much time in traffic.

Another potential chance at victory was lost in China – his only front row start of the year – after a problem with his launch settings. Nonetheless he took an impressive second despite front wing damage incurred by hitting Sergio Perez.

Five races in Raikkonen looked like Sebastian Vettel’s closest rival for the title, the pair separated by just four points. But he added just three more to his total in a pair of disappointing races.

The first of those, in Monaco, saw another run-in with Perez where both paid the price for being too uncompromising with each other. Raikkonen recovered a single point with a late charge on fresh tyres. Despite a catalogue of car problems in Canada he managed to keep his record points streak going until Hungary.

The frustrations continued at Silverstone where he should have been on the podium but for a questionable pit call to stay out when the Safety Car was deployed. However he regained some of the lost initiative with second places in Germany and Hungary which temporarily restored his second place in the drivers’ championship.

However by now team mate Romain Grosjean was increasingly a thorn in his side. At Silverstone and the Nurburgring Lotus had to tell Grosjean to let Raikkonen through – and Raikkonen may not even have got close enough at the latter race had it not been for the Safety Car.

The restrictions imposed on tyre use after the Silverstone failures partly limited Raikkonen’s ability to set the car up the way he wanted. And the long wheelbase version of the E21, introduced after the summer break, also suited him less well.

Raikkonen’s troubles were most strongly manifested in qualifying, where he lined up eighth or lower for five races in a row. But he still had strong race pace, which as always was the strongest aspect of his game.

He was back on the podium at Singapore thanks in part to Grosjean retiring but also in spite of having aggravated a back injury in practice. Second place in Korea featured a brilliantly committed pass on Grosjean which left his team mate fuming.

However the Indian Grand Prix highlighted his difficulty with car and tyres as he had to make another late pit stop. At the next race he was back in the short wheelbase car.

After qualifying at Yas Marina the signs were encouraging – Raikkonen was fifth, two places ahead of Grosjean. Unfortunately he was sent to the back of the grid for a technical infringement, after which he crashed out on the first lap. He then quit the team to have his back seen to before moving to Ferrari.

Raikkonen often made the best of what he had in the races and what problems there were tended not to be of his making, a few minor penalties aside. But he found his team mate ever more difficult to contain in the second half of the season and that isn’t going to get any easier when he’s up against Alonso next year.