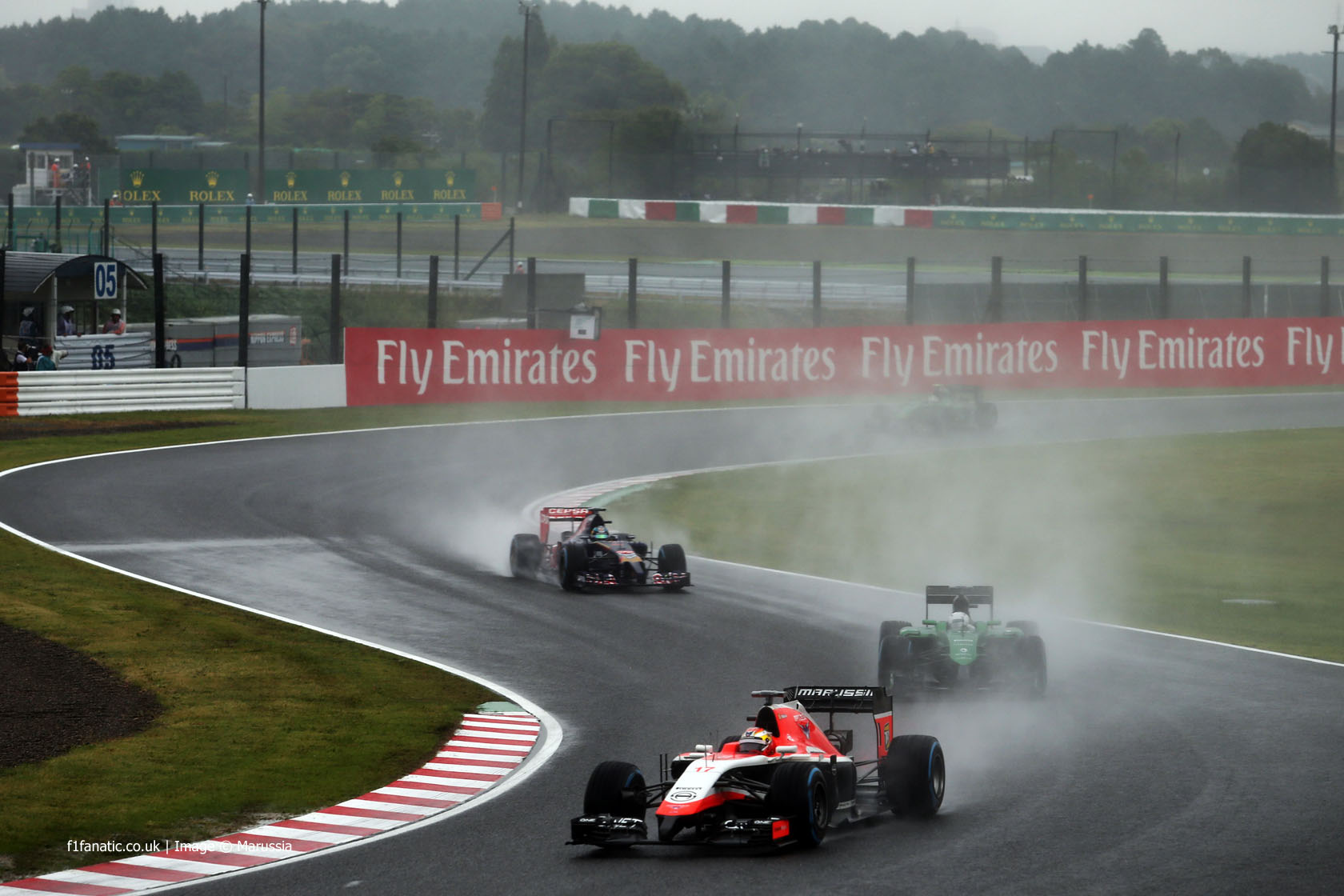 Jules Bianchi has been seriously injured after crashing out of the Japanese Grand Prix on his 42nd lap.

Although no footage of the crash has been broadcast, according to the FIA Bianchi lost control of his car in Dunlop curve (turn seven), which was under yellow flags. He was unfortunate enough to collide with a recovery vehicle which was attending to the Sauber of Adrian Sutil which had gone off on the previous lap.

Sutil said he had “aquaplaned” off the circuit and Bianchi had “more or less the same crash”. The water levels on the track, the extent of a driver’s tyre wear and how fast they are going can all contribute towards aquaplaning.

The amount of water on the track at the time had been increasing for several laps. DRS was disabled on lap 41, and before that drivers had been warned about the deteriorating conditions several times.

Some had already gone off, such as Sebastian Vettel on lap 39. At the same time a radio message from Lewis Hamilton reported “it is raining more”, to which he was told “it may build”.

Hamilton, however, had fresher tyres than Bianchi. The Marussia driver’s rubber was 17 laps old when he crashed, whereas Hamilton had pitted just seven laps earlier. The only drivers with older and potentially more worn tyres than Bianchi’s on that lap were his team mate Max Chilton (18 laps) and Jean-Eric Vergne (22 laps). The latter described the track conditions as “still OK” shortly before the crash.

As the conditions became more treacherous some drivers had already taken the decision to switch to full wet weather tyres: the Caterhams did on lap 39, Kevin Magnussen and Pastor Maldonado did on lap 40 and Jenson Button did at the same time Bianchi had his crash.

Sebastian Vettel said after the race it was a “borderline” call whether to stay out or pit for fresh intermediate or full wet tyres in the transitional track conditions.

“A couple of laps before it was getting quite bad, that’s why we decided to pit and we decided to go for intermediates again,” he said.

Vettel also said some drivers might have been discouraged from putting the full wet weather tyres on. “I think the problem, in general, is that once there is a lot of water, visibility is very poor and once there’s too much water, the inter doesn’t work any more and the [full] wet only has a very very narrow window where it works,” he said.

“Also, with a lot of water on the track, water drainage on the [full wet] tyres is not as good as it probably should be, so that’s why I think the window is narrow and that’s why other people probably decided to pit.”

The circumstances of the accident will inevitably become a focus of further scrutiny. For now however Bianchi’s wellbeing remains the priority.

87 comments on “The context of Bianchi’s crash”