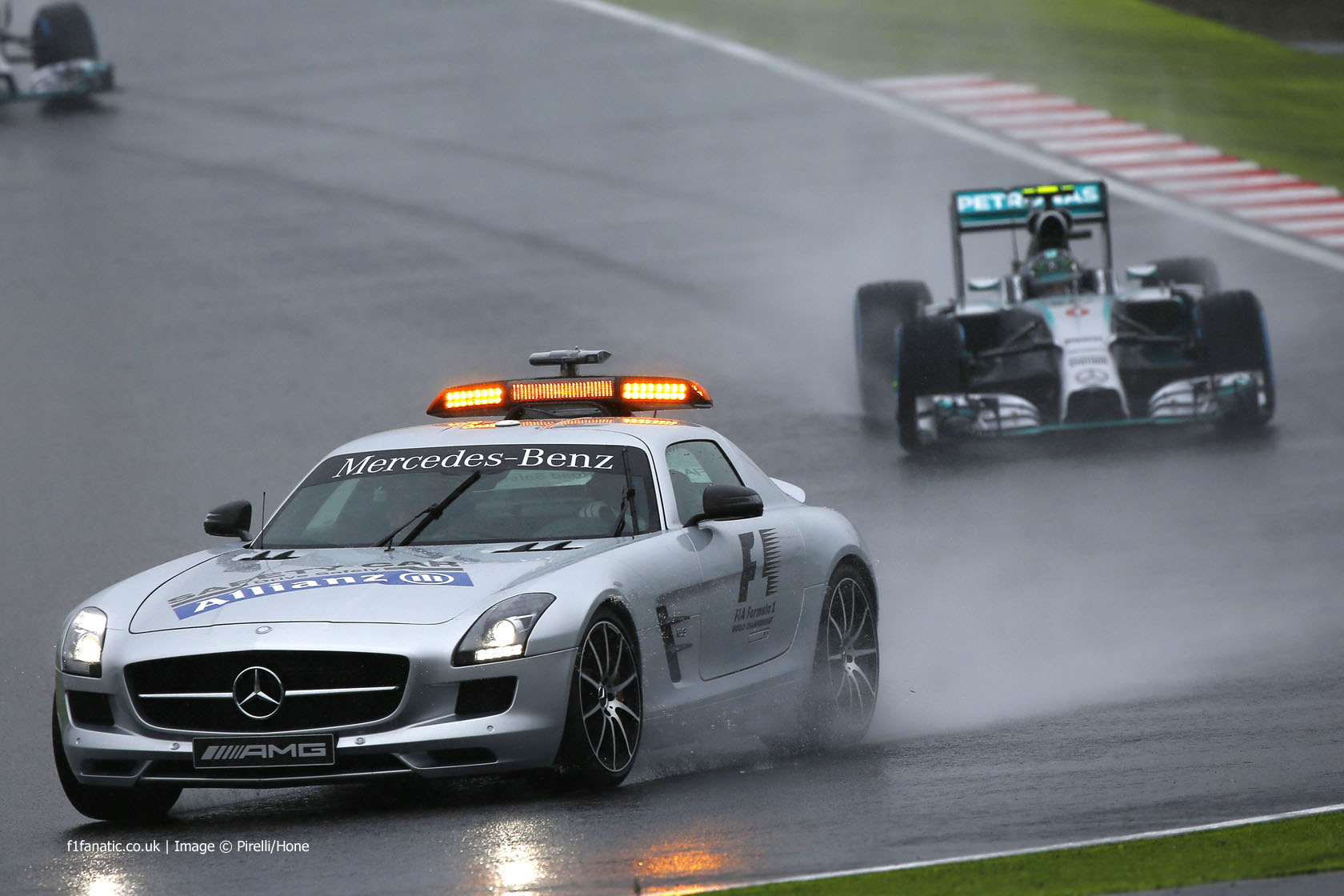 In the round-up: Sergio Perez says the Safety Car should be deployed in future instances where a car is being moved by a recovery vehicle, following Jules Bianchi’s crash in the Japanese Grand Prix.

Sergio Perez: “In the future when there is a tractor coming up to pick up the car, we need a safety car, no matter what the conditions.”

“Max Chilton, the Frenchman’s team-mate of nearly two seasons, was not available for his usual media session on Thursday, and is deeply upset by the severity of the 25-year-old’s condition after he hit a recovery tractor at high speed.”

Vergne: I have to race for Jules (Crash)

“You can question yourself, what’s the point of trying to fight with each other this weekend? Trying to fight for the last point or the last tenth or whatever… but the only answer that I found is that I have to do it for Jules.”

Nico Rosberg: “When I get into that car I close my visor and just put everything aside as always. All thoughts and all emotions and just fully focus on the job in hand and that’s what I’ll try and do again this weekend.” “As a team we had the wrong set-up on the car for the intermediates – we had big degradation. Red Bull were quicker than us on intermediates. We had a lot of oversteer and my conclusion is that I struggled more than my team mate did.”

“Of course, the title could be decided on the new double points ruling which is completely artificial and strange to have such importance for one race, but I guess now that I am behind, it is a good thing.”

Marco Mattiacci: “Looking at it from the small teams’ perspective, if I have the possibility to deliver a more performing engine to them, then they have the opportunity to score more points and gain revenue.”

Niki Lauda: “With Lewis now we’re negotiating to renew his contract after 2015. For two or three years. We’re just talking to him how long does he do.”

I'm focused on 1 thing & 1 thing only right now….Winning this championship!! I am committed 100% to @MercedesAMGF1 pic.twitter.com/Vmbqor9dOK

#F1 In Suzuka marshals are much more experienced and so allowed in some cases to decide on their own to come out quickly to recover cars.

Drivers who stop on track at Sochi are advised to do so on the right "as recovery from the outer service road is very time consuming". #F1

53,000 of 55,000 tickets have been sold for the inaugural Russian GP says circuit promoter Sergey Vorobyev.

In a largely sombre press conference, funny line from Vettel on the tight pit entry: "I think in the first place they had a lot of space…"

Note both @clubforce drivers are still yet to use any fifth components. More power for Abu Dhabi double points? #F1 pic.twitter.com/Yxxrq8GGpo

@Colossal-Squid on the political controversies which have accompanied several recent major sporting events, of which this weekend’s race is the latest example.

Look at the Olympics in Beijing, the World Cup in Brazil, The Winter Olympics in Sochi and of course the fiasco with FIFA in Qatar to see that there is a strong political undercurrent driving each of these cities or countries hosting such massive events.

Any anger at such events should be directed at the powers in charge – CVC, Bernie and the FIA, and not the performers themselves. It’s also important not to allow the actions of a state such as Russia to colour our view of the people who live there. The actions of an elite few who do not speak for the people of Russia who are like you and me should not be held against the many peace loving people found in this country that may benefit (economically, culturally, socially) from having such events take place there.

As such while I can be critical of the organisers, I cannot find myself being critical of the spectators, marshals, the team employees or the drivers who will take part in the weekend.
@Colossal-Squid

Today in 1994 Larrousse confirmed Hideki Noda would contest the final three races of the season for them in the seat which had originally been occupied by Olivier Beretta.

And ten years ago today Michael Schumacher achieved a new record for most F1 races wins in a season, scoring his 13th of the 2004 campaign in the Japanese Grand Prix.

Here are his final two laps:

70 comments on “Perez demands changes to Safety Car use”