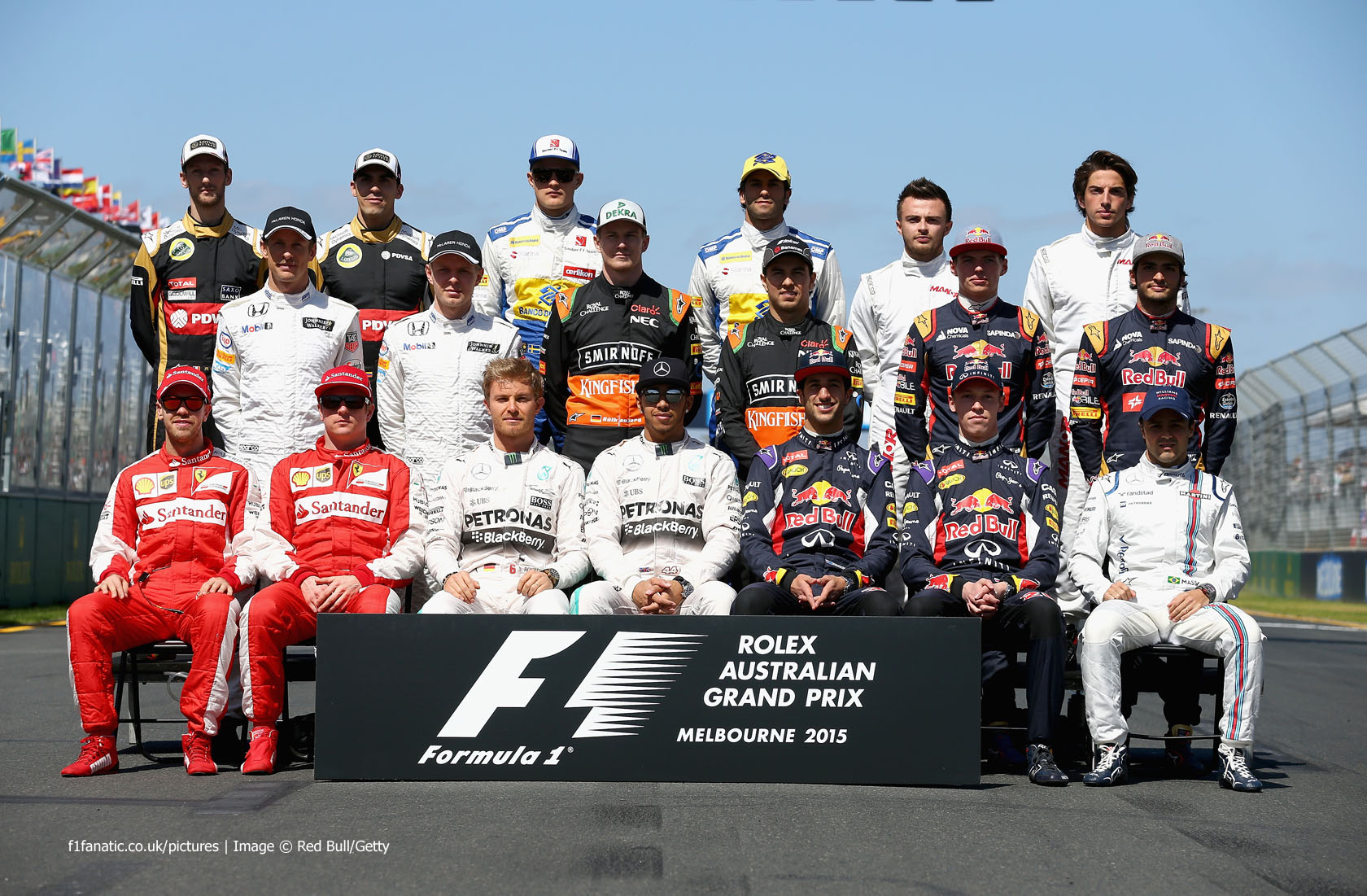 The dwindling size of the F1 grid became a talking point at the Australian Grand Prix as just 15 cars started the race – the lowest number for a season-opening round since 1958.

It’s been almost 20 years since F1 last had a full grid of 26 cars. Grid sizes have fluctuated in recent years due to the withdrawal of several car manufacturers, the FIA-led introduction of new teams in 2010, and the rising cost of competing forcing several of those out.

As usual the drivers assembled at the first race of the year for their traditional pre-season group pictures. Looking back at a decade of these ‘class photographs’ gives a sense of how, with the exception of 2010, the number of competitors in F1 has been in steady decline during that time. Midland, BMW, Honda, Renault, Toyota and Super Aguri: More than half of the teams on the Formula One grid in 2006 have either left the sport or have changed owners at least once since then. Super Aguri was the newest entry in the field at the time, formed by Honda as it wished to keep Takuma Sato in the sport, if not in their works team. Looking back it’s striking that, even before the financial crisis, Formula One was unable to attract a full grid. Of the 22 cars which did compete, four were customer cars in all but name, as Toro Rosso and Super Aguri used hardware supplied by their owners Red Bull and Honda. However that practice was soon ended. The financial trauma began to bite in 2008. The first sign that Honda’s interest had cooled came as Super Aguri was left to wither on the vine. Just four races into the season, the team collapsed. But the major shock came shortly after the championship had ended, as Honda abruptly announced its factory team was being closed as well. A management buy-out led by Ross Brawn and Nick Fry saved the team. Remarkably, thanks to the investment Honda had poured in during its final years and a late switch to Mercedes engines, Brawn GP swept the championship in 2009. But the thin field of 20 cars was in serious danger of shrinking even further.

The Formula One Teams’ Association was formed to galvanise the teams in their attempt to secure a greater share of F1’s revenues from Bernie Ecclestone. Plans for a Resource Restriction Agreement were drawn up to keep a lid on spending. But it came to late for BMW, who announced their impending exit from F1 at mid-season.

FIA president Max Mosley announced a scheme to admit new teams to the sport under a budget cap and four new teams were admitted for the 2010 season. BMW at least arranged for its team to return to former owners Sauber – following a failed sale to Qadbak – but when Toyota announced its exit three days after the season finale it mothballed the design it had already largely completed for the new season.

Mosley’s budget cap plan failed and he agreed not to stand for another terms as FIA president. The four teams which had expected to compete under the rules therefore found themselves in a much weakened position.

One team, US F1, collapsed before the season began. Another, Campos, changed hands on the eve of the new championship and was rebranded as HRT. Unsurprisingly the trio propped up the championship table at the end of the season, but with 24 cars in the field F1 at least had its largest entry since 1997.

Twelve teams, eleven names? Lotus (later Caterham) and Renault (now Lotus) fought over the use of the ‘Lotus’ name in 2011.

However there were more significant developments for the health of the F1 grid. FOTA began to fall apart late in the year when Ferrari and Red Bull agreed separate deals with Ecclestone in exchange for substantial payments – while those at the back of the grid would get nothing. The 2012 season was F1’s last with a 12-car grid as HRT surrendered to the inevitable at the end of the year. Although they never made an impression on the points scorers, they did give Daniel Ricciardo his first drive in F1, and had their cars not been on the grid in 2012 the drivers’ championship would not have come to the gripping conclusion it did at the final race of the season. The fact that one fewer team on the grid did not mean more money for the rest to share between them was made clear during the off-season as the two remaining new teams from 2010, Caterham and Marussia, dropped their experienced drivers in favour of those with budgets. FOTA’s slow death was finally completed at the beginning of a year in which the consequences F1’s failure to control costs and distribute its revenues equitably became inescapably clear.

The few car manufacturers who remained after 2009 had pressed the FIA for a new engine formula which was more in line with trends in the road car industry. A switch to V6 hybrid turbo engines and a relaxation of engine development rules was agreed for 2014, but that inevitably brought with it a significant increase in costs, not least as it led to the departure of independent engine builder Cosworth.

Three races before the end of the season Caterham and Marussia both went into administration, cutting the field to just 18 cars. This was despite Marussia becoming the first of the 2010 entrants to beat an established team in the championship, finishing ahead of Sauber thanks to Jules Bianchi’s breakthrough points score in Monaco. Caterham made a swansong appearance at the final race, but as winter approached F1 seemed destined for an 18-car entry in 2015. An 11th-hour rescue package for Marussia, now renamed Manor, came too late for them to complete their cars in time to race in Australia. It remains to be seen whether they can in Malaysia.

As they failed to qualify for the first race of the season, an injury suffered by Valtteri Bottas (not pictured) and technical trouble for two other drivers meant the season began with only 15 cars on the grid.

Last year the FIA approved a new entry for Haas F1 Team to participate from next year. However the uncertainty of Manor, and the fact some teams had to appeal to Bernie Ecclestone for advanced prize one payments over the winter, leave little room for hope that F1’s meagre field is going to recover any time soon.

Find many more annotated pictures of F1 drivers’ class photos through the years below: