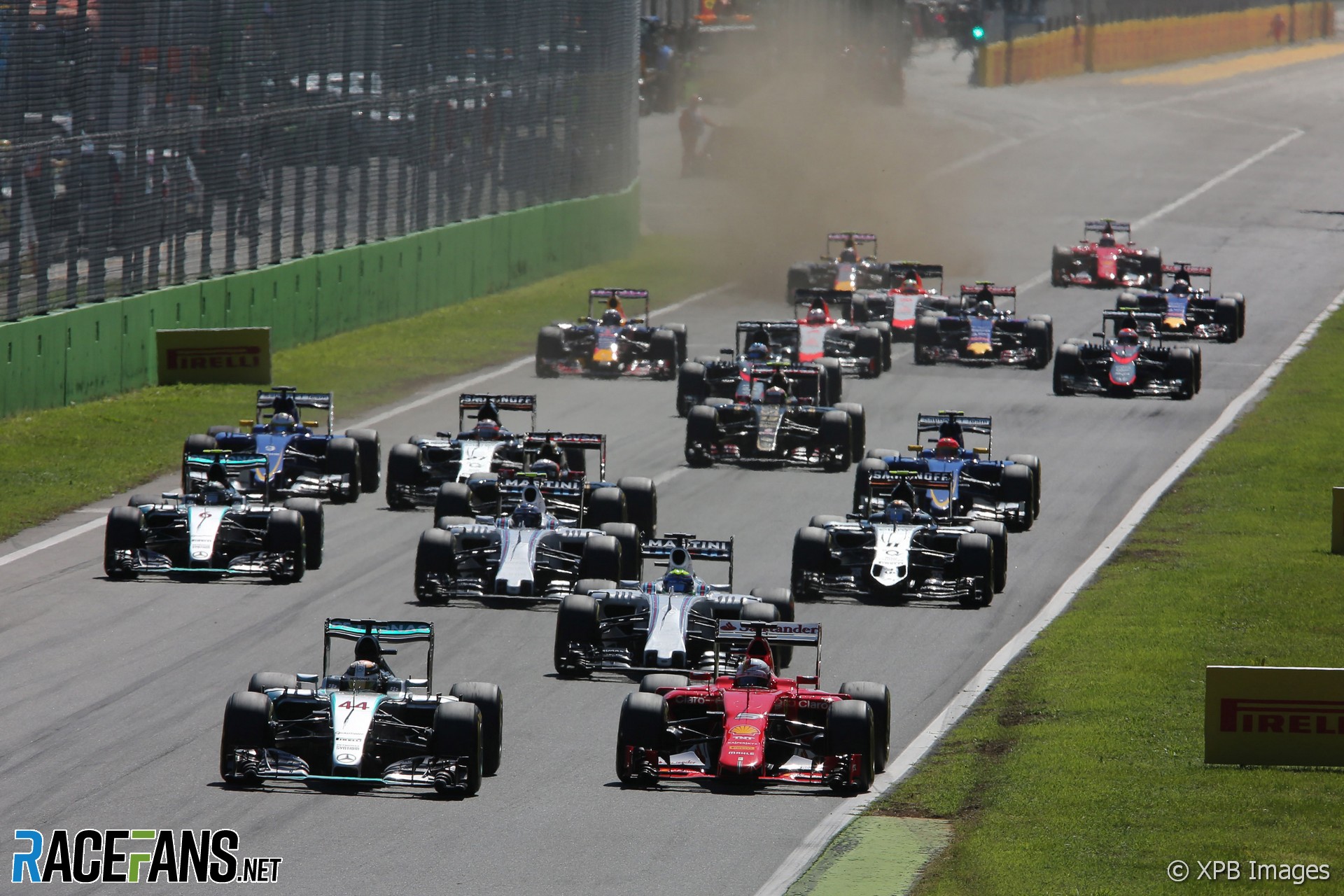 With his seventh victory of 2015 Lewis Hamilton has taken a significant step towards lifting the world championship trophy for the third time in his career.

The chances of any other outcome dived the moment the lights went out and 19 cars shot forward but second-placed Kimi Raikkonen failing to move. His Ferrari went into anti-stall, and although Raikkonen got away a few seconds later, the entire field passed him before the first corner.

Raikkonen’s delay was a particular inconvenience for Nico Rosberg, who had lined up directly behind him. Hamilton’s closest championship rival came out of turn one in sixth position, and it was already starting to look like a good day for the occupant of car number 44.

Sebastian Vettel therefore took over second place but could do little more than watch Hamilton edge away. The Ferrari clearly did not have the same pace in the race it enjoyed in qualifying, and by lap ten Hamilton was almost six seconds to the good.

As lap two began Rosberg picked up one place at the expense of Perez, but he wasn’t able to make an impression on the two Williams drivers ahead in the laps that followed. Mercedes therefore turned their attention to bringing him in for a pit stop as early as possible.

The earliest any team felt they could get away with bringing a one-stopping car in was lap 18. Both Nicos arrived in the pit lane – Rosberg’s Mercedes falling to eighth place and Hulkenberg’s Force India to eleventh – but Hulkenberg found his new set of medium tyres were beginning to suffer long before the chequered flag.

Rosberg’s early stop worked beautifully in the short-term. Williams responded immediately by bringing their lead car in, but a rapid out-lap for Rosberg moved him ahead of Felipe Massa. It was therefore inevitable Rosberg would get both Williams drivers for the price of one pit stop once Valtteri Bottas came in.

Rosberg didn’t make it back into third place immediately, however. After his poor start Raikkonen ran an extra-long first stint to get back in contention, and briefly held third place behind his team mate after easily picking off the stragglers – which these days means the likes of McLaren and Red Bull. His pit stop soon dropped him well behind Rosberg, however.

“We need to pull a gap – don’t ask questions”

Hamilton continued to lead as he pleased, waiting until Vettel had come in on lap 25 before heading in on the next lap, leaving him a 26-lap run on the medium tyres to the end.

Vettel’s pace had dropped off considerably towards the end of his first stint, so that after the pit stops Hamilton now led by over 18 seconds. It grew more slowly from then on until, with around five laps to go, Hamilton received a surprising and cryptic hurry-up message from his race engineer.

The reason why Mercedes were anxious that Hamilton not query the call became clear shortly after the race. In the wake of the blow-outs seen at Spa tyre supplier Pirelli had mandated new minimum pressure levels, and one of Hamilton’s was found to have been 0.3psi too low prior to the start of the race.

Rosberg was in similar trouble and to a greater extent – his tyre was 1.1psi too low. But the matter became academic with two laps to go when he engine died approaching the Roggia chicane. Rosberg had been forced to switch back to an old power unit due to a problem with the new-specification unit during practice, and the well-worn engine failed as he was beginning to apply pressure to Vettel’s Ferrari.

Having been kept in the dark by his team, Hamilton was somewhat surprised to take the chequered flag and then find himself being asked how much of his 25-second winning margin had been down to the slight under-inflation of one of his tyres. “Not really a huge amount on one rear tyre,” he told the post-race press conference.

The International Sporting Code spells out clearly that not having gained an advantage is not considered a defence against an infringement of the technical regulations. However the stewards were satisfied that Hamilton’s tyres “were at the minimum start pressure recommended by Pirelli when they were fitted to the car”, and that the variation had been because of the tyres losing temperature, so allowed him to keep his win.

Rosberg’s demise promoted Massa onto the podium, although he spent the final laps under strenuous attack from the other Williams of Bottas. Raikkonen zapped past the two Force Indias with DRS in his final stint.

The first he passed, Hulkenberg, was complaining about a lack of rear grip on his long second stint. However he successfully repelled Marcus Ericsson until the end, and the Sauber driver was mugged by Daniel Ricciardo for eighth place on his last lap. Daniil Kvyat also worked his way up from the back in the other Red bull to take the final point.

The two Toro Rosso drivers were next: Carlos Sainz Jnr finally saw the chequered flag after a spate of car problems and Max Verstappen took 12th on his first visit to Monza, despite having to serve a drive-through penalty at the end of the first lap following his qualifying drama yesterday.

Felipe Nasr came home 13th ahead of Jenson Button, who had been under attack from team mate Fernando Alonso until his McLaren failed.

It was a miserable day for Lotus. The Enstone team made a belated arrival at Monza due to the financial wrangling over the team at Spa but hopeful that the track would suit their Mercedes-engined E23. But just as at Silverstone both drivers incurred damage at the first corner and were forced to retire.

Last year’s championship fight between the two Mercedes drivers was shaped by a series of technical failures on both their cars.

Lewis Hamilton suffered more such problems earlier in the season, though by the end of the year it more or less evened out, particularly when Nico Rosberg’s car failed him in the season finale.

This year Mercedes has added much improved reliability to what was already an extremely competitive package, and as a result Hamilton and Rosberg have usually only left points on the table when they or the team have made a mistake. With his plainly superior speed, Hamilton had gradually pulled 28 points clear of Rosberg ahead of the Italian Grand Prix.

Mercedes’ reliability streak ended in the Italian Grand Prix, and pure chance dictated it was Rosberg, not Hamilton, who forced to give up his new engine for an old one which then failed him during the race.

Such are the fickle fortunes of motor racing: Hamilton left the circuit with a yawning 53-point margin over his team mate, but might as easily have seen his advantage slashed to just three.