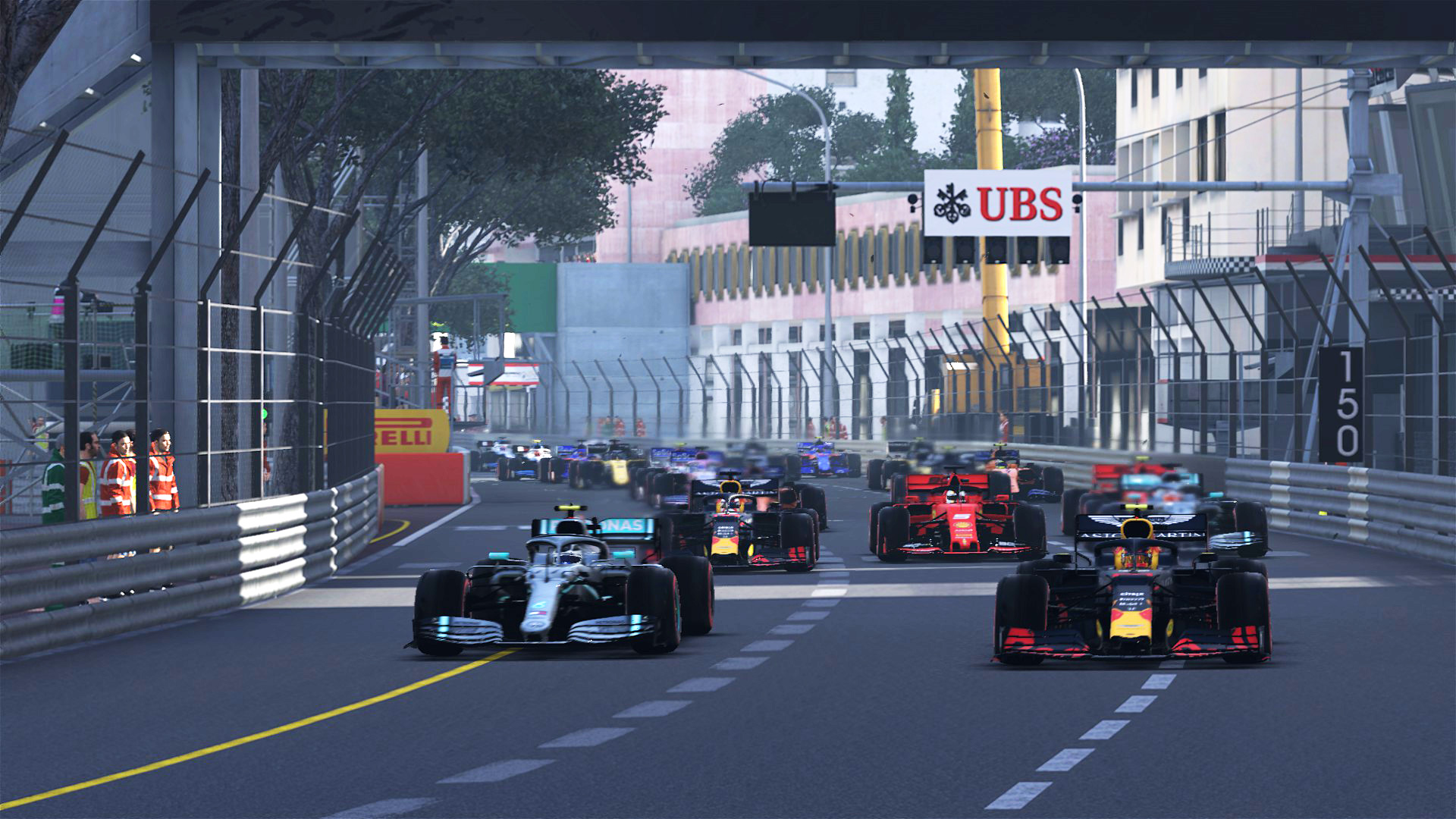 After eight races and 240 laps, F1’s Virtual Grand Prix series came to an end on Sunday.

Looking at the results, there’s no way you would have mistaken it for the real thing. Williams driver George Russell was crowned the unofficial champion, while his team mate Nicholas Latifi was the only driver who completed every lap.

Much of the time you wouldn’t have confused the on-track action for the real thing either. This was not always to its detriment. Charles Leclerc and Alexander Albon thrillingly disputed the lead around Interlagos, passing and re-passing each other in a manner real-world aerodynamics simply doesn’t permit.

However too often the racing degenerated into the kind of bumper car silliness every F1 gamer knows to expect if you race on Monaco with damage disabled, for instance.

Formula 1 deserve credit for pulling the series together so quickly. The first race was a ropey affair, with just two current F1 drivers in the field, but it showed promise of better things to come. Unfortunately, that promise wasn’t entirely realised.

Compared to equivalent series run by IndyCar, NASCAR, Formula E and others, F1 struggled to muster enthusiasm among its drivers. It never managed to half-fill its grid with current racers, peaking with eight for its Monaco and Azerbaijan rounds.

For this, some blamed the choice of game. This is ultimately a futile complaint: Formula 1 has an official game so it is unrealistic to expect they’re going to use anything else.

Nonetheless, the fact F1 2019 was used for the series appears to have been the reason why some drivers chose not to participate. Max Verstappen said as much. Romain Grosjean and Sebastian Vettel both procured simulators but entered other series instead.

Valtteri Bottas, Carlos Sainz Jnr and Sergio Perez all made one-off appearances but couldn’t be tempted back. Lando Norris, the first break-out star of the series thanks to his entertaining Twitch streams, was frank about the game’s shortcomings and sat out the finale having been the only driver besides Latifi to enter every other race (though connections problems often thwarted him).

The choice of game forced other limitations on the Virtual Grand Prix. The video angles were restrictive, the feed quality not great, in-race replays non-existent.

Moreover, sticking within the F1 universe deprived the Virtual Grand Prix of the spirit of experimentation other series, particularly the iRacing-based ones, enjoyed. The Australian Supercars series ‘travelled’ to Silverstone and attracted Verstappen to the field; IndyCar ‘returned’ to Motegi. NASCARs were seen on North Wilkesboro for the first time since 1996.

That said, F1 at least avoided the pitfalls some of those series fell into. No one suffered a sense of humour failure and intentionally wiped out a successful import from a rival series. No one lost their real-world drive over what they did (or didn’t do) in a Virtual Grand Prix.

The clearest metric for measuring the popularity and therefore success of the series is how many people watched it. The number of views the full-length YouTube coverage attracted provides a useful indication.

The opening rounds benefited from a ‘look-in’ audience. The 1.9m who watched Bahrain largely returned for the second race, which was bolstered by the addition of several new drivers.

The number of viewers was always going to fall from these early highs. But even taking that into account, the drop was alarmingly steep and, worse, showed little sign of finding its level.

Azerbaijan, one of the sport’s most reliably entertaining races in the real world, has attracted just 444,000 views at the time of writing. Sunday’s race, little more than 48 hours ago, just 336,000. The combined viewership for the four races which comprised the second half of F1’s Virtual Grand Prix series was lower than the opening race.

Why did it see such a sharp and sustained drop in viewers? In their comments, many RaceFans readers expressed disappointment in F1’s decision to hand so many virtual seats to non-drivers.

As the parallel Formula 2/Formula 3 virtual series showed, there was no shortage of capable drivers from junior series available to join in. But often these were overlooked in favour of competitors from other sports such as football or golf, celebrities and influencers. The rationale behind doing this was to attract more viewers – those plunging figures suggest it was a mistake.

F1 correctly avoided bringing the top esports drivers in, as they would have relegated most of the real drivers (except probably Russell) to scrapping for the minor places. But a full grid of F1 drivers present, past and future would have made for a more logical proposition and surely better-quality racing.

It was especially disappointing that, even in the era of W Series, F1 managed to put eight races on and not include a single female racer.

At the end of that first broadcast BBC F1 commentator Jack Nichols remarked that the carnage of the opening race was unlikely to be repeated in future events. I shared his hopeful expectation that we would see more real-world drivers, fewer ‘slebs’ and better racing over the coming races. Regrettably there was no sign of him or that hoped-for standard of racing come the finale.

For a while, it looked like it was going to happen. The Virtual Dutch Grand Prix at Interlagos wasn’t just the best title/venue mismatch since the Nurburgring hosted the Luxembourg Grand Prix, it was also the best virtual race F1 put on.

But the series ended with Russell annihilating a meagre field of real-world drivers. Just four current F1 racers showed up for the finale, the series having incorrectly announced Valtteri Bottas would boost their number to five.

Many of their rivals opted to contest the Virtual Le Mans 24 Hours instead. Pierre Gasly impressively tried to do both, but got booted from the Virtual Grand Prix after incurring too many penalties.

F1 assumed there was a significant audience who wanted to watch F1 drivers racing against celebrities. In the end, much of the Virtual GP audience and many of the real F1 drivers ended up going elsewhere. There’s a lesson there.

But it would be a pity if F1 halted its experiment with virtual races. The new edition of F1 2020 is on its way and according to Russell its handling model is a significant improvement over the previous version. It also features at least one new circuit which won’t get to hold its planned race this year.

The 2020 Dutch Grand Prix may not happen this year, but the Virtual Dutch Grand Prix can – at its correct location. If they’re going to run any more virtual races this year, they should make space for that one. Just keep it to drivers only from now on.

Note: All F1 2020 images and footage show the game in an unfinished state.

47 comments on “Was F1’s Virtual Grand Prix series a success?”