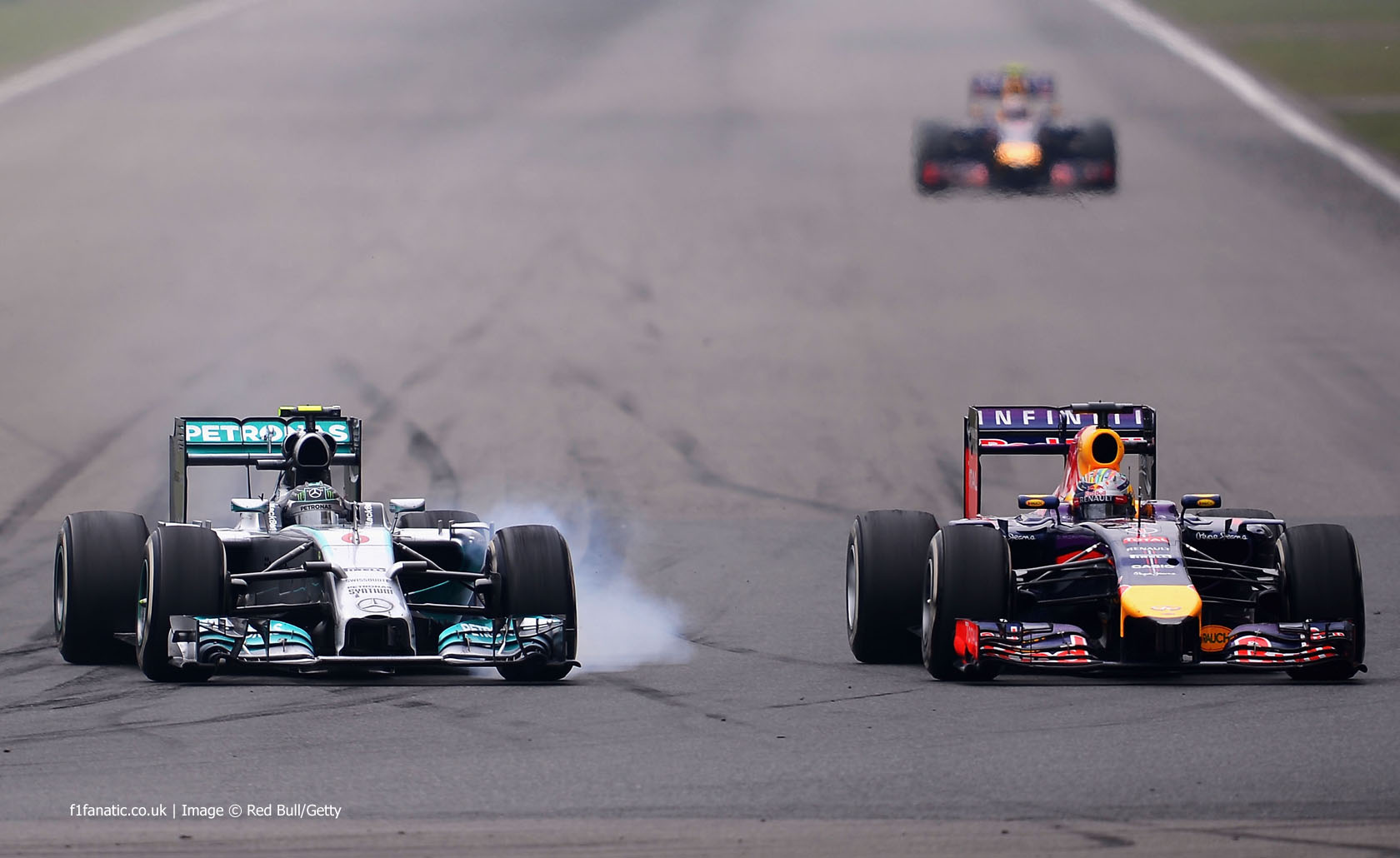 In the round-up: Red Bull believe Mercedes’ attempted to persuade the FIA to give them a three-race ban shows the championship leaders are worried about the threat they pose.

“Actually it’s quite reassuring: it means we’re getting close enough to get them rattled and sweating a bit. Back in February that looked pretty unlikely.”

“The 2014 [Silk Way rally] was scheduled to cross Russia and Kazakhstan over 3,000km and eight days in July, but organizers said they had decided to cancel it to allow the event’s government backers to focus on promoting October’s F1 Grand Prix in Sochi.”

Gerard Lopez: “We saw a clear step up from Renault’s side in China. The guys are almost talking about two seconds, which is huge.”

Horner: Vettel will be back (Sky)

Sebastian Vettel: “There are a lot of things in my head. Formula One got very complex and I think as a driver I think we have lost a lot of features and given a lot to the engineers. So it’s not that easy to understand and stay on top of everything.”

“What was the first thing you did this morning?
NR: Switched off my alarm because I woke up before it. And the next important thing that I did was weigh myself, as weight is such an important thing in F1 these days.”

Can Haas reverse the tide of history? (MotorSport)

“First of all, Haas’s California-based company Haas Automation is the USA’s largest manufacturer of CNC machine tools so that Haas enjoys tremendous manufacturing and financial resources. Haas founded his business in 1985 and started his NASCAR team in 2002. Seven years later Haas went into partnership with two-time NASCAR champion Tony Stewart and Stewart went on to win his third NASCAR championship and first with Stewart-Haas Racing in 2011.”

McLaren well off the pace in Shanghai – again (The Telegraph)

“[China is] a vital Grand Prix, but not exactly what you would call charming.”

At the doctors getting a carbon splinter out, you know it's deep when you need an X-ray 😓

Great to see that #F1 has really gathered interest over the years in China. Not anywhere near potential, but they are starting to 'get it'..

Nico Hulkenberg is fourth in the drivers’ championship at the moment – is a talent the top teams have overlooked?

I am getting tired of people praising ‘his majesty’ Hulkenberg, it is still too soon to call that he is “mopping the floor” with Perez, and certainly there must be a reason why no top team (the ones with money) have not even approached him (perhaps he is not a driver aggressive enough to win races?).

I am just saying, they know better…
Macrob

High drama off the track and on it at the San Marino Grand Prix 25 years ago. Gerhard Berger was incredibly fortunate to survive an inferno when his car crashed at Tamburello and caught fire.

After the race restarted the two McLaren drivers fell out over which one of them was supposed to take the lead at the start. Ayrton Senna went on to win from team mate Alain Prost, but it was a major turning point in the deterioration of their relationship.

Berger missed the next round in Monaco while he recovered from his burns, but was back in the cockpit for the following round in Mexico. Here’s what happened to him:

158 comments on “Red Bull pleased to have “rattled” Mercedes”