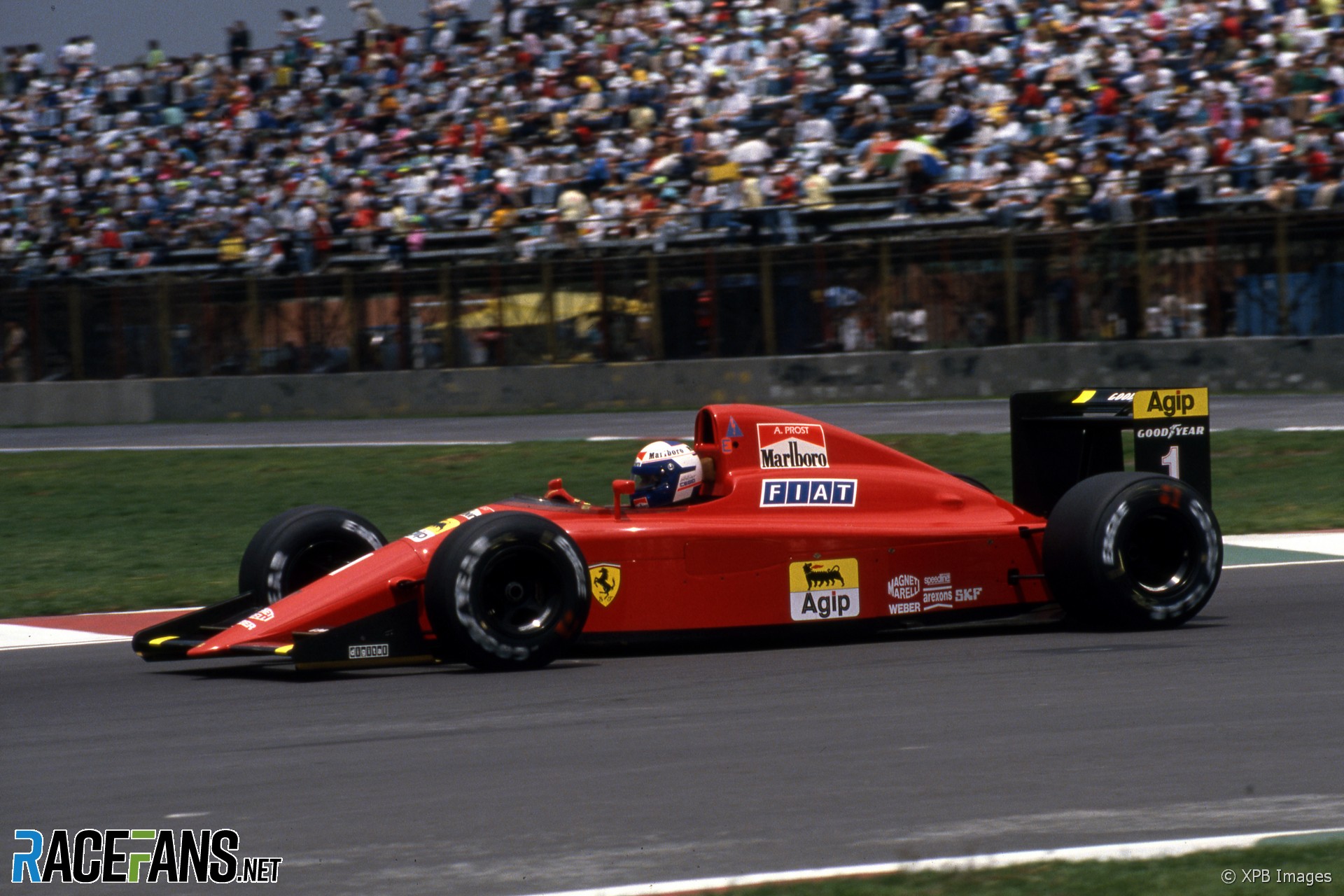 The 1990 Mexican Grand Prix, held 25 years ago today, was an intense race made famous by a breathtaking move by Nigel Mansell.

But while Mansell’s daring pass on Gerhard Berger stole the show, it was his Ferrari team mate Alain Prost who won the race.

Ayrton Senna’s one hundredth grand prix celebrations were spoiled by a puncture – and Prost’s win meant the championship fight between the pair was very much on.

No pole for Senna, Prost struggles to 13th

Senna had begun almost half of his preceding 99 starts from pole position – but for race number 100 he wasn’t even on the front row. McLaren team mate Berger had beaten him to the top spot for the second time in their six races together.

The number 27 McLaren of Senna wasn’t even to be found on the front row – late in qualifying he was bumped down to third by Riccardo Patrese’s Williams.

The peculiar demands of the Autodromo Hermanos Rodriguez – which will return to the calendar later this year – was having its usual effect. Built on a lake bed, much of its surface was very bumpy, although the organisers had resurfaced the fearsome 180-Peraltada corner at the end of the lap. And the high altitude – Mexico City is over 2,200m above sea level – meant thinner air, depriving engines of power, affecting some more than others.

Among those struggling the most to adapt was Ferrari, who found Goodyear’s special qualifying tyres particularly difficult to master. A late charge by Mansell netted him fourth on the grid, despite briefly being held up by traffic.

But reigning world champion Prost posted his worst qualifying position in six years. He could only manage 13th, due in part to being caught out by a new rule introduced for the race weekend. Prost spun his car during Friday’s qualifying session and stalled, and under the new directive he could not be given a push start. Even so he struggled to make any further progress during Saturday’s second qualifying session.

The Pirelli runners were enjoying a day in the sun as the Italian rubber was finding good purchase on the low-grip surface. Jean Alesi’s Tyrrell and Pierluigi Martini’s Minardi led a clutch of Ford-Cosworth runners. Stefano Modena’s Judd-powered Brabham also made it into the top ten at the expense of the V12 Lamborghini-powered Lotuses.

Places at the rear of the grid were fought over just as intensely as those near the front as 35 cars were competing to fill the 26-car grid. Thursday pre-qualifying session, held on a damp but drying track, eliminated the first five.

These included a few comically uncompetitive entries. The hopeless Life entry pedalled by Bruno Giacomelli broke down as usual. The Eurobrun of Claudio Langes only made a cursory ‘attempt’ at qualifying due to financial problems. Bertrand Gachot’s Coloni, with its overweight Motori Moderni-built Subaru flat-12 engine, at least came within a second and a half of making the cut.

Both Lola drivers made it through pre-qualifying, despite Aguri Suzuki crashing heavily and having to use the team’s spare car, and went on to secure a place on the final grid. And so did another pre-qualifying runner – temporarily, at least.

Roberto Moreno dragged many unworthy F1 cars to places they didn’t deserve to reach, and had already got Walter Brun’s ER189B onto the grid on two occasions. He did so in Mexico as well, only to be excluded. The reason? He had been given a push start, and his team manager had neglected to inform him of a certain new rule…

Before the race Senna marked his impending 100th start with a cake made by Ada Elena, sister of team co-ordinator Jo Ramirez, who then had a portion of the cake liberally applied to his head by Senna.

There were no Mexican drivers in the field, and hopes that a Mexican team might soon arrived were dashed on race day. A demonstration of a Mexican-financed Formula One car project dubbed GLAS, powered by Lamborghini, had been due to take place, but local backer Fernando Gonzalez Luna had mysteriously disappeared.

Berger had jumped the start two weeks earlier in Canada, and was handed a swingeing one-minute penalty for the transgression. He made no such mistake this time, but was out-dragged by Patrese, and Senna came down the inside of him as they reached turn one.

Little of this was seen by those watching on television, as the local director chose to show much of the lap from the onboard camera of 15th-placed Michele Alboreto, perhaps confusing the red-and-white Arrows for one of the McLarens.

As lap two began Honda power overwhelmed Renault: first Senna, then Berger demoted Patrese to third place. The Williams driver quickly regretted the choice of harder ‘B’ compound Goodyears instead of the ‘C’s favoured by most of his rivals. Thierry Boutsen and Nelson Piquet came by on lap two.

Mansell had lost two places at the start and the V12 Ferrari was surprisingly humbled by Alesi’s V8-powered Tyrrell on the second lap. Mansell reclaimed the place on the eighth tour, and by lap 25 had picked off the Williams drivers as well.

But a few laps later he had his team mate in his rear view mirrors. Prost had made steady progress from 13th on the grid, running slightly less downforce than his team mate to aid overtaking on the long straight.

By lap 31 the order was Senna, Piquet, Mansell and Prost. Berger, who had started the race with higher tyre pressures than his team mate, had made for the pits as early as lap 13 having trashed his Goodyears.

The front runners intended to complete the race without pitting, but Piquet’s tyres began to fade and by lap 42 the Ferrari drivers had ejected him from the podium positions. He made for the pits sooner afterwards.

Prost had made up ten places to hold third, and was now stalking his team mate. As lap 55 began Mansell was held up by Alboreto Arrows in the Peraltada, and Prost slipstreamed past him for second place.

This was a significant move, as up ahead Senna was having difficulties. From the low 1’19s his lap times suddenly rose by around a second on lap 44. Meanwhile Prost was lapping in the high 1’18s, and the McLaren ahead was growing ever larger in his vision.

Senna suspected he had a problem with his tyres, but was having trouble with his radio communication with the pits. Once he got through to team principal Ron Dennis, around ten laps from the end of the race, the call was made for him to stay out. Dennis reasoned that pitting would drop him further down the order than if he remained on track and was passed by the Ferraris.

But Senna’s problem wasn’t tyre wear – it was a slow puncture. And Prost was flying – on lap 58 he lowered the fastest lap to a 1’17.958, and two laps later he took a look at Senna at the inside of the Peraltada, but had to back off.

Prost continued to swarm over the rear of his rival as Mansell closed on the pair of them. As lap 61 began they were separated by half a second – and Prost went through at the first corner. Next time by Mansell duplicated the move to take second with eight laps to go.

But the drama was only just beginning. Lap 64 began with Mansell spinning off at turn two as he tried to catch Prost. He had barely got going again when Senna’s right-rear tyre finally failed. That promoted Berger into third place, and with Mansell cruising he now had a shot at second.

With three laps to go he threw his car down the inside of Mansell at turn one, barging the Ferrari aside to take second place. But Mansell wasn’t having any of it – he was straight onto the tail of the McLaren, forcing Berger to defend left and right as he struggled to apply the power on his Ferrari.

Approaching the Peraltada for the penultimate time Mansell was bobbing from side to side in Berger’s mirrors. Heading into one of the quickest corners on the calendar at the time, where the Ferraris had registered forces of 4.7G during practice, Mansell launched to the outside of Berger and flashed past to take second place.

“I closed my eyes,” he joked when asked about the pass afterwards.

That daring pass sealed a one-two finish for Ferrari. Alessandro Nannini nursed the tyres on his Benetton to take fourth ahead of Boutsen and Piquet.

Senna rued his decision not to overrule the call to stay out. Prost’s win cut his championship lead to eight points, and victories for the Ferrari driver in the next two races would put him ahead in the standings.

Senna was classified 20th despite having retired in the pits. Ahead of him Alesi lost the final points place to the recovering Piquet with two laps to go, while Martin Donnelly’s eighth place was the first time all year Lotus had finished on the lead lap.

Despite having got both their cars on the grid, the two Lolas were out by lap 12 – Suzuki having tangled with the only other Japanese driver in the race, Satoru Nakajima. David Brabham retired around the same time with electrical problems, and was almost hit at the pit exit by Philippe Alliot after stopping at a flickering exit light.

Two cars which did not figure at all in the Mexican Grand Prix were nonetheless closely related to one of the most significant developments in Formula One over the coming years. Neither of the turquoise Leyton House CG901s made it onto the grid, a development which cost the team’s technical director his job.

The sudden availability of Adrian Newey on the job market was of particular interest to Williams technical chief Patrick Head. Newey was quickly summoned by telephone, and within a few months helped create some of the most crushingly dominant racing cars of all time.

The Leyton House found smooth surfaces much more to its liking. Just two weeks after failing to make the grid at all in Mexico, Ivan Capelli came within three laps and a faulty oil pump of winning the French Grand Prix.

Two years later, Mansell won the last Mexican Grand Prix in a Williams-Renault FW14B designed by Head and Newey. The Mexican bumps which had proved beyond Newey’s CG901Bs were defeated by computer-controlled active suspension.

Mexico held F1 races in the sixties, seventies, eighties and nineties, and is finally set to return following a 23-year absence. Every corner on the circuit is being revised but the track’s enviable location in the heart of one of the world’s largest cities remains unchanged.

Formula One is also a very different prospect these days, and in November we will discover how modern grand prix racing, a much smaller field and a somewhat tamer track compares to the Mexican Grand Prix of old.