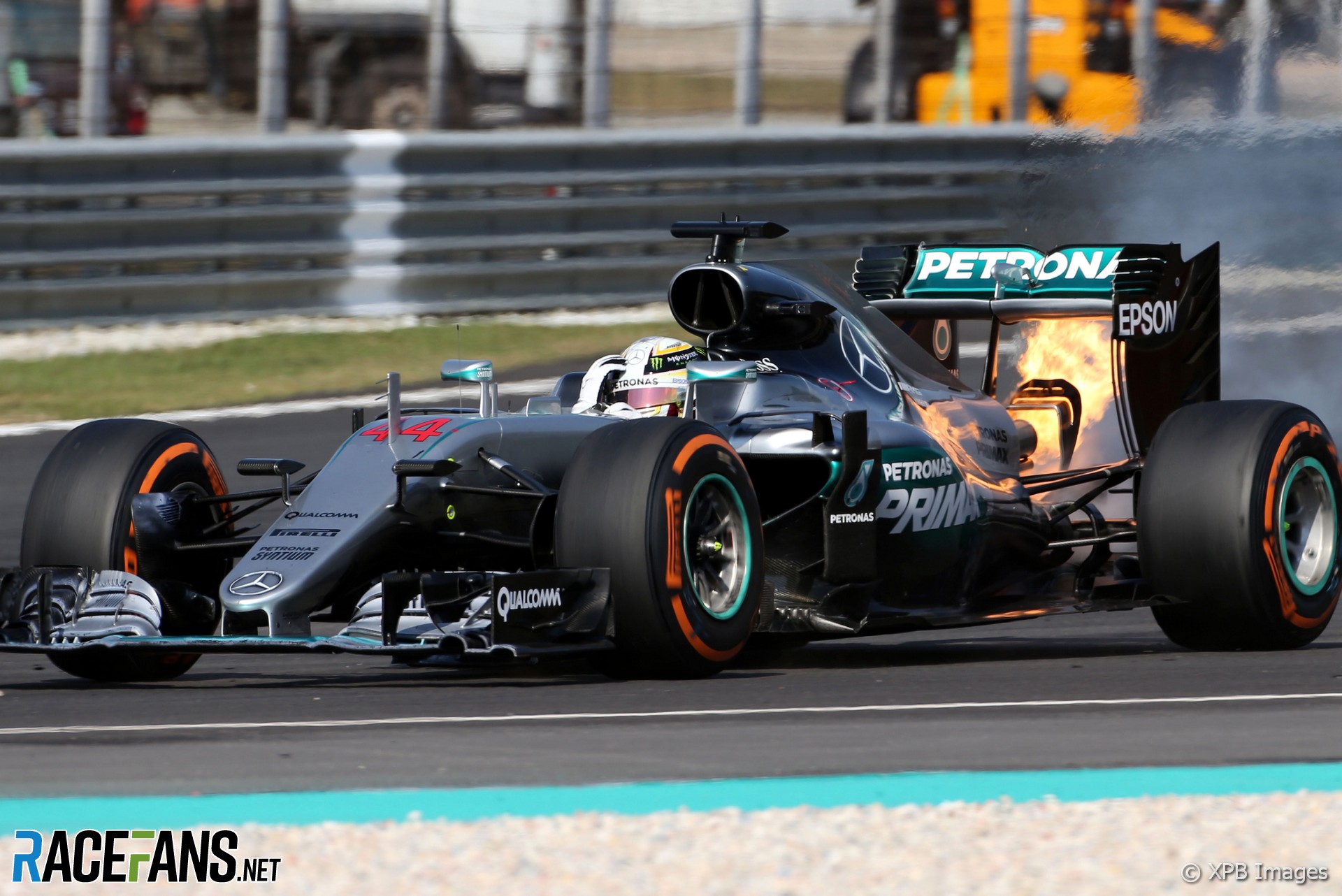 Moments after the Malaysian Grand Prix started, it seemed events had conspired for once in Lewis Hamilton’s favour this year.

While he made a clean getaway from pole position, Nico Rosberg came under attack – and was sent spinning to the back of the field.

But a cruel twist lay in store for Hamilton – one which dealt his championship hopes a serious blow.

Hamilton went into the race in great shape. He and the Mercedes W07 clicked immediately with the resurfaced and far smoother Sepang circuit. He took one of the most straightforward pole positions of the year.

And, crucially, he maintained that advantage at the start. But Rosberg was quickly in trouble.

A rapid start by Sebastian Vettel opened up the opportunity for him to pass both the Red Bulls. Daniel Ricciardo had got away slowly, but Max Verstappen’s start was better, and as he approached turn one he pinched Vettel towards the inside.

Slightly ahead of them an unaware Rosberg was turning into the first corner. Vettel arrived slightly too quickly, understeered wide and struck the Mercedes. Reacting swiftly, Verstappen dodged around the pair of them. He was slightly delayed, Rosberg fell to the back of the back, and Vettel retired with broken suspension.

Cue the recriminations. Vettel, mindful of a similar incident at Spa a few weeks ago, tried to implicate Verstappen. But the error was plainly his alone and the stewards recognised as much: their summary didn’t even mention the Red Bull driver.

Vettel was given a three-place grid penalty for the next round. Bottas copped a drive-through for a similar move on Hamilton in Bahrain, so the Ferrari driver should perhaps consider himself fortunate.

Verstappen quickly recovered from his early setback. He was primed and ready when the VSC period ended and immediately jumped past Raikkonen. He was soon by Perez as well, and Raikkonen demoted the Force India driver another position by lap four.

Three laps later the Virtual Safety Car was called for again, this time after a brake failure fired Romain Grosjean’s Haas into the gravel trap at turn 15. This was far enough into the race for several drivers to take the opportunity for a quick pit stop.

The first among them was Verstappen, who took on another set of used soft tyres. He emerged close enough to Hamilton that, at racing speeds, the Mercedes was at risk of dropping behind the Red Bull when he made his first pit stop.

Mercedes therefore stretched Hamilton’s first stint, leaving him out until lap 20 before bringing him in for hard tyres. Ricciardo stayed out a lap longer and Verstappen, who had passed Raikkonen again when the Ferrari driver headed for the pits, now led.

Hamilton out of luck again

Verstappen came in for his second pit stop six laps after his team mate. This time he rejoined in front of Raikkonen, and on his slightly fresher hard tyres be began closing on Ricciardo.

By lap 37 less than a second covered the Red Bull drivers, and Verstappen radioed the team urging them to let him by. Three years ago ‘multi 21’ had proved an ineffective radio message; perhaps on this occasion ‘multi 333’ would have been too confusing. No such radio message was apparently used, and instead Verstappen tried to take second place the hard way.

It came very close to working. Verstappen and Ricciardo pushed each other to the limit in a superb exhibition of hard but fair racing. Ricciardo narrowly prevailed. That proved critical, because a few moments later this battle for second place became the battle for victory.

In a stunning twist, Hamilton’s Mercedes power unit expired on the main straight. “I just lost power all of a sudden,” he explain. “You could hear something blew and I obviously had to stop.”

Just as Hamilton had seemed poised to eradicate his team mate’s title lead, his retirement strengthened Rosberg’s position. Making matters worse for Hamilton, Rosberg passed Raikkonen, elbowing the Ferrari aside at turn two. The stewards were unhappy with the contact, and gave Rosberg a ten-second penalty.

Fortunately the team had practised for such an occurrence during the build-up to the race, after spending too long on a similar penalty during the German Grand Prix. Once he rejoined the track, and after being given permission to use a higher power mode for a few laps, he was easily able to pull out enough of a lead to ensure he kept the place.

Red Bull pitted Ricciardo and Verstappen during the final VSC period. This ensured their one-two, as Verstappen no longer had a tyre advantage to close Ricciardo down and risk any contact. That cemented a return to the top step of the podium for Ricciardo for the first time since Spa in 2014. He may have lucked in, but it was some recompense for his misfortunes in Spain and Monaco.

Three VSC periods meant there were plenty of drivers ruing strategies which had gone wrong, and others quietly thanking their fortune. However Valtteri Bottas wasn’t one of them: he made a single-stop strategy work and brought his Williams home in front of both Force Indias.

Sergio Perez and Nico Hulkenberg sandwiched Fernando Alonso, who had enjoyed an essentially free pit stop after Hamilton retired. Nonetheless he had recovered brilliantly from last on the grid. Jenson Button was hard done by having made his final pit stop shortly before the VSC, missing out on an opportunity for a free stop.

The final point, and the first of his career, went to Jolyon Palmer. It was a deserved reward for a driver who had run well in practice but slipped up in qualifying.

Back on a track where engine performance counts, the Toro Rossos struggled. Carlos Sainz Jnr finished behind a Renault – admittedly only by around three seconds, but that was the difference between scoring a point and missing out. Daniil Kvyat struggled with fading brakes.

Romain Grosjean had even more severe brake problems – a failure pitching him off the track at the last corner early in the race. It was a miserable race for Haas, as Esteban Gutierrez suffered a puncture early on and finally retired when a wheel detached itself from his car.

Before the Malaysian Grand Prix weekend Hamilton had already described his 2016 championship campaign as the most luckless of his decade-long career. It’s hard to argue with that, even though this was his first race-ending technical failure. He has endured a string of other faults which were not his doing which have cost him a lot of points.

His deficit to Rosberg now stands at 23. That’s far from insurmountable with up to 125 remaining over the final five races. But that’s only if his car doesn’t let him down. His disconsolate comments after the race made plain his loss of faith in his hardware.

The inevitable clamour about ‘conspiracies’, too dull and too predictable to be worth repeating here, was not lessened by Hamilton’s vague insinuations about ‘someone or something’ not wanting him to win the championship. He later indicated the object of his suspicions was spiritual rather than solid.

However Mercedes’ mortification at the latest problem to strike their star driver was obvious. Particularly as it came at the home race of their title sponsor, and one where they had been widely expected to clinch the constructors’ championship.

“One thing we had made a priority was to ensure an equal competition between the drivers in the final phase of the season,” said executive director for technical Paddy Lowe, “with no distortion of the battle through technical problems”.

“Unfortunately, we have failed in that objective today in brutal fashion.”

Rosberg’s remarkable drive to third following his first-lap misfortune completed a stunning swing in fortunes between the two championship contenders. The title isn’t his yet, but his claim to it is now stronger than ever.