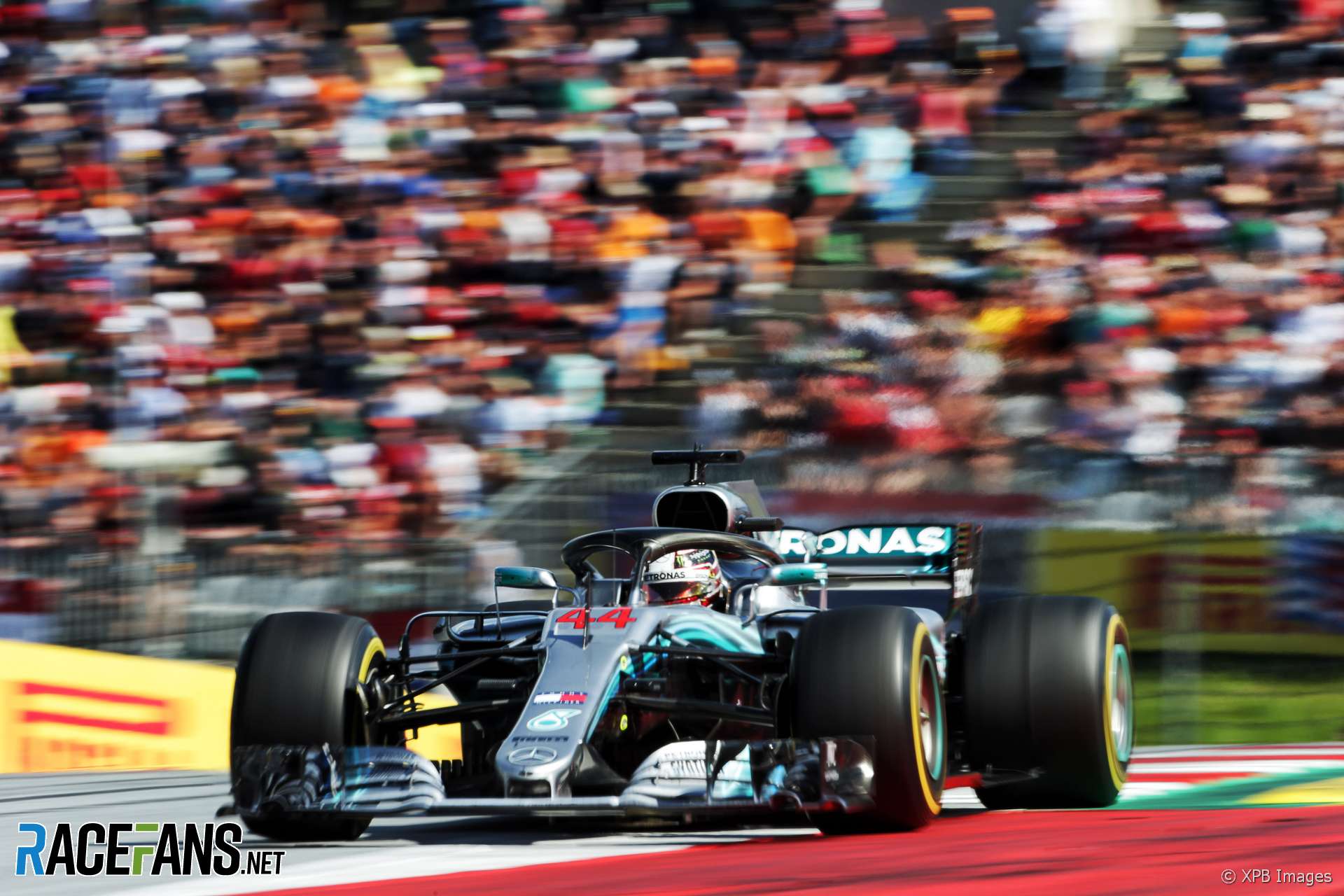 Lewis Hamilton left his Mercedes team in no doubt about what he thought of their tactics after he lost the lead in the Austrian Grand Prix.

Mercedes left Hamilton on the track when a Virtual Safety Car period was triggered early in the race. However the chasing pack all pitted, and after the VSC period ended Hamilton was doomed to lose his lead.

Sure enough when Hamilton finally made his pit stop under green flag conditions he fell to fourth place. Matters worsened as he began to suffered tyre blistering and was passed by championship rival Sebastian Vettel. He later retired with a loss of power.

Hamilton criticised the team’s tactics repeatedly on the radio during the race. Strategist James Vowles came on the radio at one point to apologise for the error. Here’s a selection of what was said.

Hamilton’s radio exchange with Mercedes during the Austrian Grand Prix

Hamilton: “Anything I should be aware of?”
Bonnington: “Nothing at the moment. Let’s just target Verstappen’s lap times.”
Bonnington: “VSC, Keep the delta positive.”

Hamilton: “What the hell was that? How did we miss that? I’ve got no tyre left.”

Hamilton: “I’ve got no tyre left, these tyres.”
Vowles: “Lewis, It’s James. I understand. We’re still with you mate. It’s my mistake. But give us what you can. There will be opportunities later.”
Hamilton: “I can hear you guys.”

Hamilton: “Am I fourth now?”
Bonnington: “Affirm Lewis, yeah. Entirely on us that problem.”

Hamilton: “I wanted to say something but…”

Hamilton: “Just leave me to it, Bono.”

Hamilton: “I need this pack to f***ing charge up.”

Bonnington: “OK Lewis we are up at the rear limit on tyre temps.”
Bonnington: “We have seen signs of rear blistering on tyres ahead.”
Hamilton: “So you just want me to settle for fourth, yeah?”
Bonnington: “Affirm.”

Bonnington appears to have misheard him, and then corrects his reply:

Bonnington: “Sorry, just want to settle in place until they recover.”
Bonnington: “Looks like Ricciardo has big blistering. You should be ablke to see it from where you are.”

Hamilton: “I’m not going to be able to pass these guys. We’ve just thrown away a win.”

Hamilton: “So I back off and now look what’s happening.”
Vowles: “Lewis it’s James. I have thrown the win away today but you have the potential opportunity to get back up. Just let the tyres cool. We trust in you and believe in you. I’m sorry.”
Hamilton: “I’ve got Vettel now on my tail.”

Hamilton: “Well, there you go.”

Hamilton: “I’ve got blistering too.”

Hamilton: ”These tyres aren’t going to last at this pace.”

Hamilton: “I don’t know what to say to you guys. These rears are not going to bloody last.”
Bonnington: “OK, we’re on it.”

Bonnington: “Lewis 12 laps to go, Vettel is 22 seconds up the road, we need to think about consolidating.”
Hamilton: “So we turn down?”
Bonnington: “Affirm, that’s my suggestion.”

Hamilton: “How many points am I going to lose?”
Bonnington: “At current pace it will be three points.”

122 comments on ““What the hell was that?”: Hamilton fumes at Mercedes over tactical error”