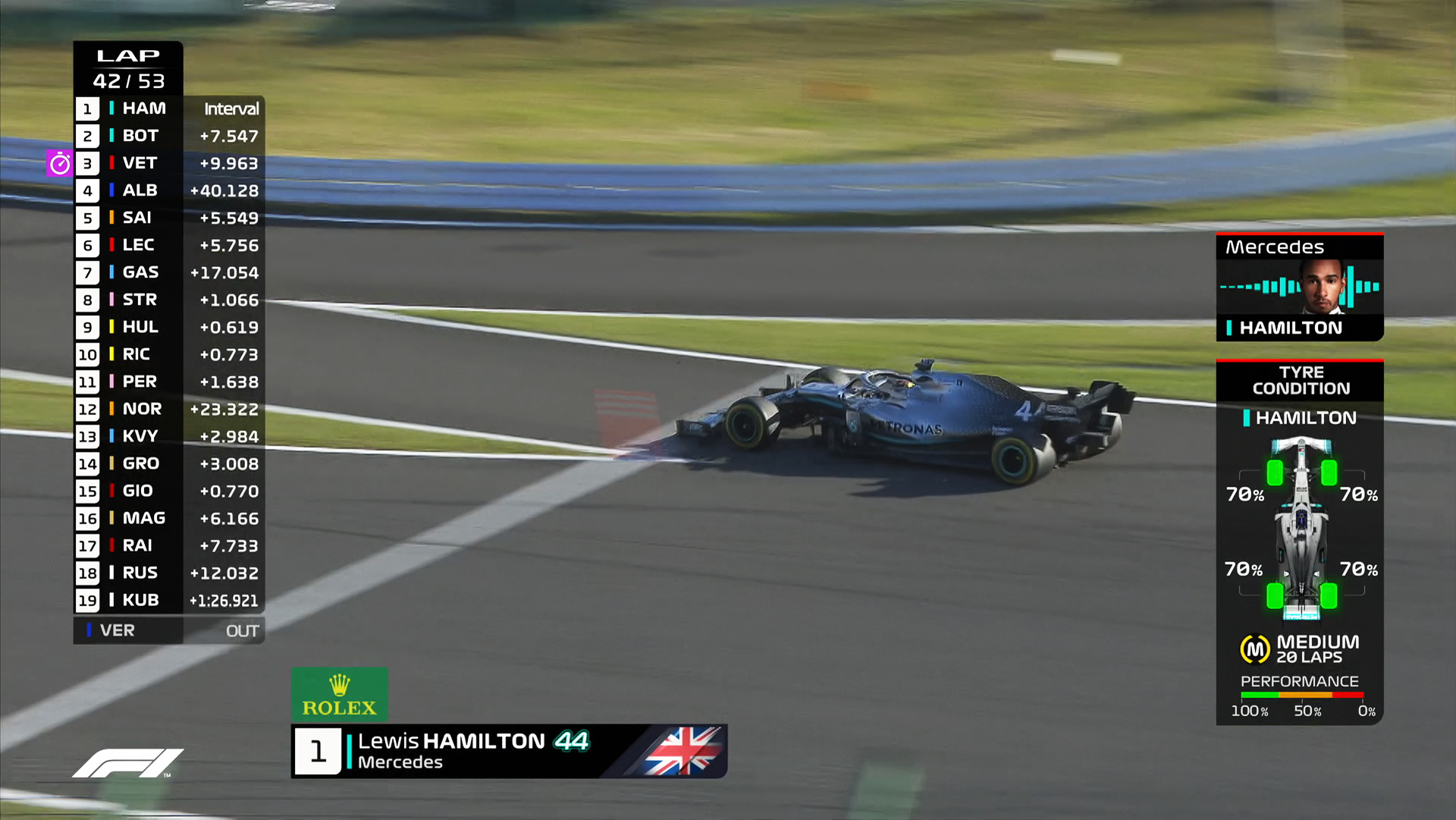 As Formula 1 and broadcasters are increasingly able to dip into the sport’s enormous footage vaults situated in Biggin Hill outside London, fans are able to catch the latest grand prix, then immediately rewind to the equivalent race from 30 or more years ago.

Apart from causing dyed-in-the-wool fans to go all wispy-eyed, and allowing younger generations to marvel at the sight of drivers racing full-bore in atrocious conditions, arguably the most striking difference between then and now is to broadcast technology.

Where F1’s early single-channel broadcasts travelled from circuit to lounges in analogue form, current signals rely on digital transmission via complex hi-def infrastructures. Arguably, though, the biggest change is to the actual on-screen experience via massive improvements in in-car technology, and increasing use of graphics.

F1 has moved on from the days of 8-bit graphics and blurry cars. Onboard cameras have proliferated and roaming cameras follow Lewis Hamilton’s every scoot through the paddock. The use of on-screen graphics has grown too, reaching CNN newscast proportions, and indicative of a commercial rights holder going all-out to woo American fans.

This became a talking point during the Japanese Grand Prix when a new Tyre Performance graphic was first aired. It was widely believed to convey actual tyre wear on the car by viewers expecting the data was acquired through sensors on cars using information provided by sole tyre supplier Pirelli.

However, asked about the data in Mexico, Pirelli’s Head of Car Racing Mario Isola said he had been ‘surprised’ by the graphics, and confirmed that Pirelli had not provided the information. This prompted confusion, and Isola’s claim the graphics were “misleading” was widely reported.

The matter was clarified during a subsequent meeting between the two parties. But two questions remain: Does the proliferation of graphics add to the viewer experience, and at which point does F1 hit peak graphic?

RaceFans sat down with F1’s director of broadcasting and media Dean Locke in Mexico to understand the background to current graphics packages. F1 entered into a partnership with Amazon Web Services in June 2018, and it is AWS’s machine learning capabilities that make the graphics possible, as seen here:

“We consulted with broadcasters, with commentators, [asking] what it is ‘you struggle to tell – undercuts, overcuts, these are famous ones?’ So those were our first ones.

“That’s what we agreed with broadcasters. That’s a really good story, so difficult to tell. How can we do that in graphic form? How can we bring that to life? So that was our pit stop strategy [graphic].”

He makes the point that all data used is available publicly – if you know where/how to look – with none of it obtained from teams or suppliers.

“This is not data that we take from strategic sources, this is public data, our data that we use, and we use the AWS machine learning models to throw all of that [into a big pot], jumble it all up, and get it out.”

“Exactly, for want of a simple comparison, and we’re working with our own data team, [with] AWS data scientists and we have people like (ex-Ferrari/Williams engineer) Rob Smedley providing information from a team perspective working with us.

“I also have a graphics team; my role is very much to make it editorially relevant.”

F1 has a diverse viewer base, says Locke, “with some very knowledgeable and some not so knowledgeable. That first [pit stop] graphic is very much for hardcore F1 fans who like strategy, like to understand strategy.

“Our second graphic was the battles that go on in the midfield and the difference, you know, how they develop. It’s very difficult for us on a world feed to show a build-up to a battle because hopefully there’s a lot of battles going on.

“It’s not like football where you’ve got one ball, one pitch and 20 players. So, what we wanted to do, is how can we build up the tension and the pace of, [say], (Sergio) Perez catching someone else lap after lap? How many laps to pass and all that.”

This is a reference to the second AWS graphic, a visual tool used by commentators to enlighten audiences: “We told them ‘we’re not trying to steal that when they get there. That’s up to you.’ But we’re trying to enlighten the audience that there’s something brewing. Don’t go away. There’s something coming up…”

Which brings us to the ‘tyre’ graphic’, through which F1 seeks to visualise performance drop-off.

“We can do our high motion 4K replays of the tyre,” says Locke, “but that doesn’t really tell you anything. Okay, when there’s real bad damage, we can see that.

“But just degradation is very hard to see. So we set ourselves a goal, you know, we had a great story in Monaco with [Lewis] Hamilton this year. You know, where he’s complaining about his tyres. We did it through the radio, and after the race, you know, he had a go at his engineers.

“So we thought, ‘How can we tell that story better by not using just team radio?’ So we set the guys a really strong test of using all the data we have.

“That’s not Pirelli data; that’s all the data we have,” Locke stresses.

Effectively AWS and his team took all the parameters to create a huge algorithm, then tested it for 12 weeks using different races for accuracy and visualisation.

“It takes in a huge amount of parameters. You know, what the car is doing, where it is, tyre drop off. It’s about performance of the tyre. I’m not going to explain each parameter. But there’s a whole lot: clean air, dirty air, everything else. We take all the data, what they did in practice sessions. Degradation.

“There’s a huge amount, to be honest, I’m probably not even qualified to say, you know, that’s for the data engineers. It was a huge task, but not to be misunderstood that it’s a simple laps versus tyre life [representation].

“It’s all to do with the performance of the tyre. And the graphic is actually quite simple, and I think it’s the first AWS graphic that appeals to all viewers. We gave it a little bit more detail [for the Mexican race] and there’s probably more coming to this graphic as well over probably next few three races into next year.”

And the accuracy of the data, was that was a sticking point?

“We’re really happy with the accuracy of it. We were surprised how accurate it is. And we reviewed it afterwards to see exactly how, as a world feed provider, we’re getting used to how we should use it, and when we should use it. And I think in Japan we got quite excited about the graphic.”

Yet, fans (and the media) complained that a graphic showing around 50 per cent performance remaining on Hamilton’s tyres coincided with his message that he’d been strung out to dry on his tyres…

“A different source,” explains Locke, “That’s team radio. We’ve worked really hard to reduce the delay. We have a new workflow that gets this radio out really instantly, really quickly.

“We’re very lucky: You don’t hear from football players what is said on the pitch. We’re incredibly lucky: we hear from these guys going 200 miles an hour around the track.

“So, this radio is flying out, and we’ve got these detailed graphics coming in. It’s like anything: we’ll get better at using it.”

What about the future? What is the next graphic on Dean’s list?

“We have a biggish number [for] next year, setting that against what haven’t we done before, what is really difficult to do? What has nobody ever done? I’ll just tease that one up because there is a graphic like that. What is unique to Formula 1 that other sports can’t do?”

“But we haven’t actually nailed down exactly which ones and how many, and it’s something we’re actually in communication with at the moment.”

“We’ve got 90 broadcasters in 200 territories in multiple languages, so we have a bigger task than most sports. You know, our world feed has been developed over 15, 16 years. We meet the broadcasters, all broadcasters several times through the year, we meet the on-site broadcasters every race.”

Sky’s head of F1 Scott Young says is this interaction and dialogue with broadcasters that has created, “A really strong working relationship between host broadcaster ourselves as broadcasters,” as Young puts it, “but what it did is create a process, so everyone has slightly different view on what they’d like to see, and how their audiences best perceive it.

“The complexity around motorsport is that the car leading on-track may not be the car that is [actually] leading the race, and that’s why you need really good graphics packages that help unpack the challenges of what’s actually happening on track,” says Young.

“Formula 1 is most technically advanced sport in the world, which makes it complex to grasp. It’s important to grow the audience, so fans who understand F1 will intrinsically know what is going on, but we are trying to grow the sport so need to help people understand that the guy who’s sixth or seventh could actually win the race; that over a 90min race many aspects will change, whether it’s the undercut or tyres degrading.”

Could there, though, be a danger of graphics overload?

“There is a balance – at times when they overlay a number of graphics it can get busy. It essentially comes down to what story you’re trying to tell, if you have lap time, telemetry and team radio all at the same time the screen can get quite full,” says Young.

Olaf Mol, the Dutch commentator who has covered over 500 grands prix since 1991, is among those concerned about the growing reliance on graphics.

“My thought is ‘don’t give us too much data, don’t try to be too precise because there will always be people who understand the sport, who have been watching it for many years and know what tyre wear is.

“They know what happens when there is a change of tyres or blisters or graining. Sometimes there is too much data that we need to explain.”

He also expresses a preference for an optional ‘lean’ feed – broadcasters currently have a choice of all-singing and -dancing worlds feeds, and ‘naked’ clean feeds used for replays – stripped of overload.

“In general, over the last couple of years, because Liberty are Americans and they are trying to get into the American market, the amount data of graphics has grown immensely to where I said they are close to covering up the screen.”

However, as Young points out, that has operational and commercial implications. After all, AWS don’t supply their services with no hope of return, which is why the graphics feature their branding.

“You can either do it with a simple graphics package or you can do it with complexity, and it’s up to F1 to find that balance,” he adds.

As any F1 racer knows, overall balance of the car is a crucial ingredient of success, and so it is with broadcasting the fastest sport on earth.

“We discuss exactly these things,” says Locke, “We show them the graphics. We get feedback on those graphics. I think the diverse viewership of Formula 1 is unique and really challenging, and then there is the multiple language thing.

“We have these incredibly clever people [in the teams] trying to make the sport really complicated, and it’s our job to uncomplicate it in a way. But, then, people also like the fact that F1 is so complicated…”

96 comments on “Too much information? Why F1 is adding yet more TV graphics”