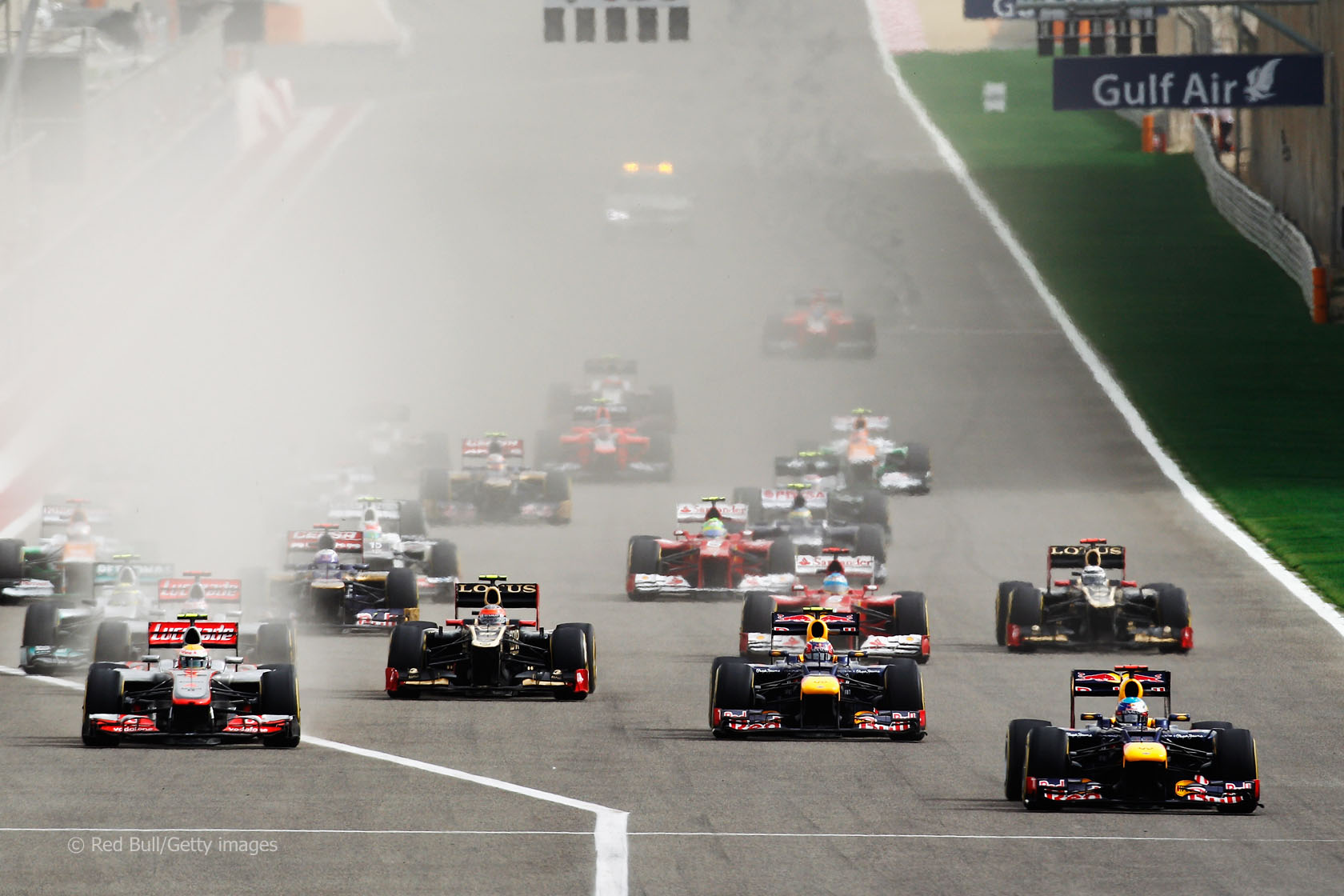 Which F1 driver had the best race weekend in Bahrain?

Compare all the drivers’ performances below and vote for who you think was the best driver of the Bahrain Grand Prix weekend.

Sebastian Vettel – Red Bull made some small changes at the back of the RB8, including sealing a gap to redirect the exhaust flow, and suddenly it all clicked again for Vettel. After snatching pole position by a slender margin he used it as a platform for a 2011-style victory. He built up a big lead at the start which proved vital as Raikkonen came on strong later in the race.
Mark Webber – Fourth for the fourth race in a row – and out-qualified by Vettel for the first time this year. He got away well at the start despite lacking KERS, but was unable to keep the charging Lotuses behind him.

Jenson Button – Didn’t look happy with the balance of his car all weekend. Qualified his usual two-tenths-or-so off Hamilton but lost ground at the start. He was then passed by Raikkonen before making an early pit stop as his tyres started to go off sooner than expected. Was in with a shout of sixth when a host of problems ended his race: “In the last few laps, the car sounded really noisy. I think the initial problem was an exhaust failure, then my puncture, and then a differential failure; so I had to retire.”
Lewis Hamilton – Qualified in the top two again and held the place at the start. But his lap times tailed off quickly and he was passed by Grosjean. Slow pit stops cost him over 13s in pure time, plus more being caught behind traffic. Spent the final stint trying to pass Alonso, but couldn’t repeat his successful move from earlier in the race.

Fernando Alonso – Last week he scraped into Q3 at the expense of Vettel, this time it was Raikkonen. Made a great start, threading his way through to gain four places and hold fifth. Was passed by Hamilton after his second pit stop but Ferrari’s reliably quick service got him back ahead again. Had the finishing line been further down the straight he might have taken sixth off di Resta.
Felipe Massa – Finished seven seconds behind Alonso in what was clearly his best performance of the year so far. Started 14th but was up to eighth by the end of lap one. Fell behind Rosberg at the first round of pit stops and finished the race ninth.

Michael Schumacher – His unlucky start to the year continued in qualifying, when a DRS problem consigned him to elimination in Q1. That plus a gearbox change left him 22nd on the grid. He gained four places on lap one, then picked off the Toro Rossos and Petrov. Clean air in his second and third stints allowed him to make more progress, and he inherited a point when Button retired, holding Perez behind him.
Nico Rosberg – Was in the hunt for pole position until he made a mistake at the final corner and slipped to fifth. A poor start left him ninth and he lost time in the second stint stuck behind Alonso. When he jumped the Ferrari at the second stint he defended his position very firmly, provoking public criticism from Alonso after the race. But the stewards found nothing untoward in his driving in this incident and a similar one with Hamilton where the McLaren driver got ahead. After the McLarens took themselves out of the picture, he passed di Resta for fifth. Kimi Raikkonen – Missing Q3 might have done him more good than harm as it meant his was equipped with more new tyres for the race. Lost crucial time after he was mugged by Massa in the opening laps before he re-passed the Ferrari. Fresh tyres in the first two stints helped him overhaul his team mate. He then had a crack at Vettel for the lead, but admitted afterwards. “I chose the wrong side.” Dropped back from Vettel in the final stint and finished second.
Romain Grosjean – Made a great start from seventh on the grid, moving up to fourth before passing Webber and Hamilton to run second. Lacking the benefit of fresh tyres he dropped behind Raikkonen at the end of their second stint, complaining that the team had left him out too long on his worn tyres. Closer to his team mate’s pace in later stints, he ended the race less than seven seconds behind for his first F1 podium.

Paul di Resta – Reached Q3 despite the team suffering the disadvantage of missing second practice due to safety fears following a petrol bomb attack earlier in the week. He was the only driver to make a two-stop strategy work in the race, offering little resistance to those much faster than him, choosing his battles with care. Kept a little KERS in hand to defend from Alonso at the exit of the final corner, which was enough to grab sixth place by a quarter of a second.
Nico Hulkenberg – Dropped back with a clutch problem at the start. Ran a three-stop strategy and had to make way for his team mate at one point. Passed the tyre-hobbled Kobayashi late in the race to take 12th.

Kamui Kobayashi – Was the only driver to start the race on medium tyres but had wheelspin and lost a place. Tried to run a two-stop strategy but his tyres went off late in the race.
Sergio Perez – Sauber split their strategies, Perez running a three-stopper after starting eighth. He was passed by di Resta early on and slipped out of the top ten. Poor straight-line speed left him powerless to pass Schumacher at the end of the race, leaving both Saubers out of the points.

Daniel Ricciardo – An exceptional qualifying performance put him sixth on the grid. Unfortunately his start was a disaster, and he came around at the end of lap one behind his team mate who’d started 17th. Never showed anything like his qualifying pace in the race: “I need to be hard on myself now and find out what I did wrong to make sure I don?óÔéĽÔäót do it again,” he said. “It was a race to forget.”
Jean-Eric Vergne – Continued to be slower on Saturday – but quicker on Sunday – than his team mate. “We must find a solution to this, because if we can start further forward with the pace we have, then we should see a more positive result on Sunday,” he said.

Pastor Maldonado – Started 21st after a gearbox change but got up to 11th after his first pit stop. Had just switched to medium tyres at his second pit stop when a left-rear blow out sent him into a spin and out of the race. The team are investigating the cause.
Bruno Senna – Made a good start from 15th but slipped back through the pit stops before stopping three laps from home: “Towards the end I started feeling a lot of vibration in the brake pedal. The engineers were looking at it, so I kept pushing as you never know what will happen, but the vibration got worse and the decision was made to pit to avoid risking an accident.” Heikki Kovalainen – Qualified 16th, beating Vergne on merit and taking advantage of Schumacher’s problems. But he was hit from behind on the opening lap and sustained a puncture. He recovered to finish 17th.
Vitaly Petrov – Lost time with a damaged floor in FP3, then didn’t like the balance of his car on softs in qualifying. But showed encouraging pace for the team during the race, finishing 14s behind Ricciardo’s Toro Rosso.

Pedro de la Rosa – Started in front of Glock but was never going to be able to keep the car there. “We have to gain some speed per lap, more than anything because we want to be fighting our rivals on a consistent basis,” he said.
Narain Karthikeyan – Ran a four-stop strategy – the only driver to do so intentionally – yet finished just half a second behind his team mate. “My race performance was extremely good, I?óÔéĽÔäód say it was my best Grand Prix so far this season,” he commented.

Timo Glock – Made a mistake on his qualifying lap, leaving him on the back row of the grid. Struggled for pace in the race and was unhappy with the balance of his car, saying: “I had no balance in the car, no speed and no chance to push after the second or third lap. The rear tyres dropped off massively and every time I did try to push, the rears locked under braking and I had no braking stability.”
Charles Pic – Started in front of Glock and stayed there in the race, lapping more quickly than his experienced team mate. Retired with a problem with his engine’s air valve system on lap 24.

Who was the best driver of the Bahrain Grand Prix weekend?