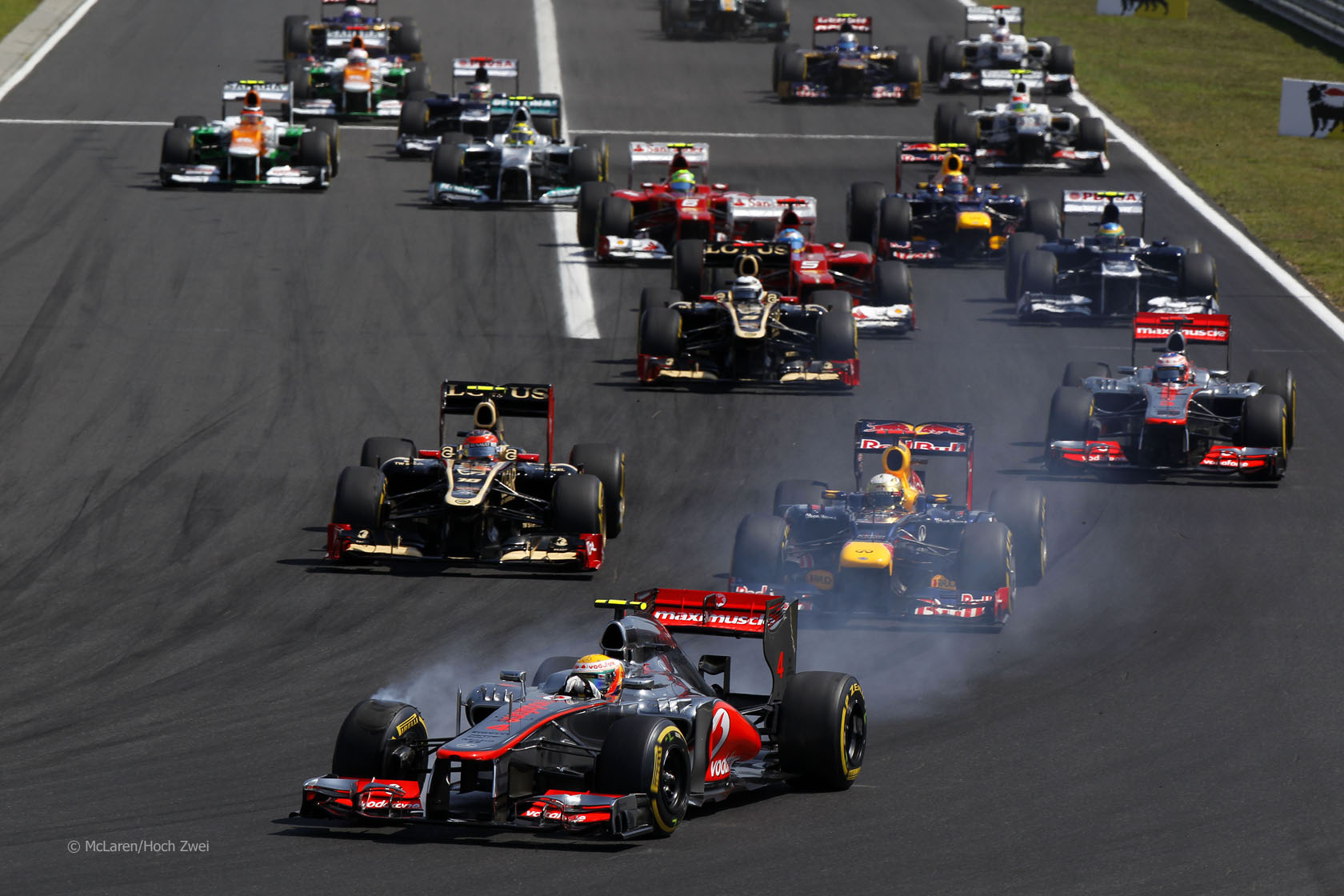 Which F1 driver had the best race weekend in Hungary?

Compare all the drivers’ performances below and vote for who you think was the best driver of the Hungarian Grand Prix weekend.

Sebastian Vettel – Following the team’s struggles on Friday, third place on the grid was a good result, especially as his team mate failed to reach Q3.

Attempting to wrest second place of Grosjean at the start lost him a place to Button and consigned him to a frustrating two stints stuck behind the McLaren, which led to him imploring his team to “do something” on the radio. They gambled on a late extra pit stop which nearly cost him a place to Alonso.

He wasn’t able to catch the leaders but had Narain Karthikeyan’s retirement produced a safety car instead of a permanent yellow flag he could have had a very exciting end to the race.

Mark Webber – Missed out on Q3 but a superb start (how often do we say that about Webber?) put him on course for a damage-limiting drive. His final pit stop cost him three places including one to championship leader Alonso.

While Webber thought he could’ve made it to the end without a further stop, team principal Christian Horner said his differential problem made it necessary. Jenson Button – Fourth on the grid was his best since Bahrain but he was over six tenths of a second slower than Hamilton.

He didn’t have his team mate’s pace in the opening stint either, falling almost nine seconds behind in the first 14 laps. He managed his tyres better in the second stint and reduced the gap to Hamilton, so he was frustrated by how early his second pit stop was.

Worse, it dropped him behind Senna (as the team cannot have failed to anticipate it would) and ultimately cost him a podium. His admission that he was “not happy with the strategy after the race” suggests he will have some frank things to say about the team sacrificing track position for an unusable performance advantage at a circuit where passing is so tough.

Lewis Hamilton – Hamilton was hooked up in the revised MP4-27 right from the word go. But for Webber pipping him by less than a tenth of a second on Saturday morning, he would have headed every session including all three parts of qualifying.

The latter was essential to his victory chances as it allowed him to preserve two sets of new medium tyres to resist the challenge from the Lotus duo. His win was not as dominant as it looked like it might be on Saturday, and it breathed life into his flagging championship hopes.

Fernando Alonso – Damage limitation was the name of the game in Hungary and as usual Alonso did the best he could. He made one of the race’s few passing moves, taking Perez after his first pit stop before the Sauber had come in. Keeping Raikkonen behind probably wasn’t realistic but beating Webber and increasing his championship lead was the best he could have hoped for.

Felipe Massa – Closer to Alonso than usual, particularly in qualifying. But he fell behind Senna at the start and never looked like getting back in front of the Williams. Indeed, he dropped far enough back that Webber was able to come out of the pits between them, further evidence that Massa is falling short even in the diminished role of a ‘number two’ driver at the moment.

Michael Schumacher – Crashed in a wet second practice session on Friday for the second weekend running, though this appeared to be a case of misfortune, skidding off when the track was at its wettest.

He was last in Q2, leaving him 17th, but made the unusual mistake of lining up 19th at the start. He then switched his engine off when the restart was given and picked up a puncture when he was pushed into the pits.

Having completed a slow first lap he returned to the pits to change his tyres – and broke the speed limit, collecting a drive-through penalty. Adding insult to injury, the team then lost the telemetry on his car. They retired him short of the 90% classification distance so he can change his gearbox at the next race without a penalty – the only consolation from an awful weekend.

Nico Rosberg – Rosberg’s trouble-free run served to underline that Mercedes were nowhere on pace in Hungary, Schumacher’s dramas notwithstanding. Rosberg started 13th and climbed up to tenth to take the final point. Kimi Raikkonen – A less-than-perfect qualifying lap and losing a place to Alonso on lap one were the two things that kept Raikkonen from victory. A problem with his KERS following the delayed start contributed to the latter – Raikkonen had to ask his team how to reset it, something he had also had to do during practice.

After that he demonstrated excellent pace in the Lotus again, especially when he enjoyed sustained clear air in his second stint, which allowed him to claim second at the expense of his team mate. Couldn’t get close enough to Hamilton to test his rival’s defences.

Romain Grosjean – Friday looked like a continuation of his dodgy weekend from Germany. So he reverted to an earlier set-up and was back on form on Saturday, claiming his first ever front row start.

Having rebuffed Vettel at turn one he went after Hamilton and despite a few scruffy corners on laps 25 and 26, kept the pressure on the McLaren. Alonso running long on his second stint and Schumacher’s reluctance to obey blue flags cost him second to his team mate – Grosjean was perhaps wise not to force the issue when Raikkonen appeared on the inside of him at turn one on lap 46.

Paul di Resta – The contest between the two Force India drivers remains one of the closest in the field. Di Resta was only 0.16s slower than his team mate in Q2, and finished a little over five seconds behind him.

Di Resta felt the car was capable of better than 12th: “My race was compromised by a poor start and I lost a few positions going into turn one. I had the same issue in Germany last week so we need to understand how we can improve that going forward because it?ů‘ťľ‘šůs hurting our track position.”

Nico Hulkenberg – Ran the same strategy as his team mate except that he had to start on used tyres, having made it into Q3. His tyres went off towards the end of the race but his team mate behind was grappling with the same problem.

Kamui Kobayashi – After Sauber took their biggest points haul of the season in Germany, Hungary was a non-race for them. “We have simply been too slow here,” sad Kobayashi. “We have been struggling all weekend, especially with the medium tyre compound.”

Kobayashi was squeezed wide at the start, dropping back four places to 19th. From there the team tried to salvage his race with an early pit stop, but that forced a long middle stint on the very tyres Sauber were having the most trouble with. Having recovered his place in front of the Toro Rossos an hydraulic leak ended his race early.

Sergio Perez – Sauber explored the possibility of running a one-stop strategy for Perez, delaying his first pit stop until lap 21. He couldn’t make the tyres last long enough, but ended the race catching the struggling Force Indias hand over fist.

Daniel Ricciardo – Once again the Toro Rossos were just behind the midfield battle. Unusually it was Ricciardo who went out in Q3 this time but he got ahead of his team mate at the start and finished there, albeit 45 seconds behind the next car and lapped.

Jean-Eric Vergne – Had to make an extra pit stop on the 65th lap to clear rubbish from his sidepod which was causing overheating. Pastor Maldonado – Made a poor start from eighth and fell to 12th place. Made an attempt to pass Di Resta at turn 12 on lap 47 which ended in contact and resulted in a drive-through penalty for Maldonado which ended his hope of scoring points.

Bruno Senna – Reached Q3 for the first time and made a brilliant start, briefly getting ahead of both Ferraris. But he was out-accelerated from turn one by Alonso and Webber.

Nonetheless he kept Massa behind until the flag and was little troubled by either Button or Webber who briefly appeared behind him as well – the latter staying there.

Heikki Kovalainen – Within a few tenths of beating Ricciardo in Q1 but the Caterham was well over half a second off being able to reach Q2 on merit. Could do little more than watch the Toro Rossos pull away during the race.

Vitaly Petrov – A mistake at turn 11 left him over half a second slower than Kovalainen in qualifying. Wasn’t as happy with the balance of his car in the race: “The car felt very different to how it performed in qualifying and we need to go back and look at the data to try and understand why. It?ů‘ťľ‘šůs a bit strange as we had definitely improved it over the weekend, but in the race it just didn?ů‘ťľ‘šůt feel the same”

Pedro de la Rosa – Had a close race with Glock, finishing half-a-second behind the Marussia. “At the end I had Glock in my sights and he was blocking his tyres a lot, but the race finished before I could overtake him. The blue flags didn?ů‘ťľ‘šůt help much either and this time I was unable to pull it off.”

Narain Karthikeyan – Clos drove his car again in first practice which was a particular disadvantage at a track which he didn’t race at last year. His car was compromised by extra holes cut in its bodywork to aid cooling.

He crashed out late in the race when his car failed: “With five laps to go, the car was steering to the right, it was getting worse, and coming out of turn three the steering broke, so we have to figure out what happened exactly.”

Timo Glock – Was unhappy with the balance of his car. An early spin compromised his race and left him under attack from De la Rosa.