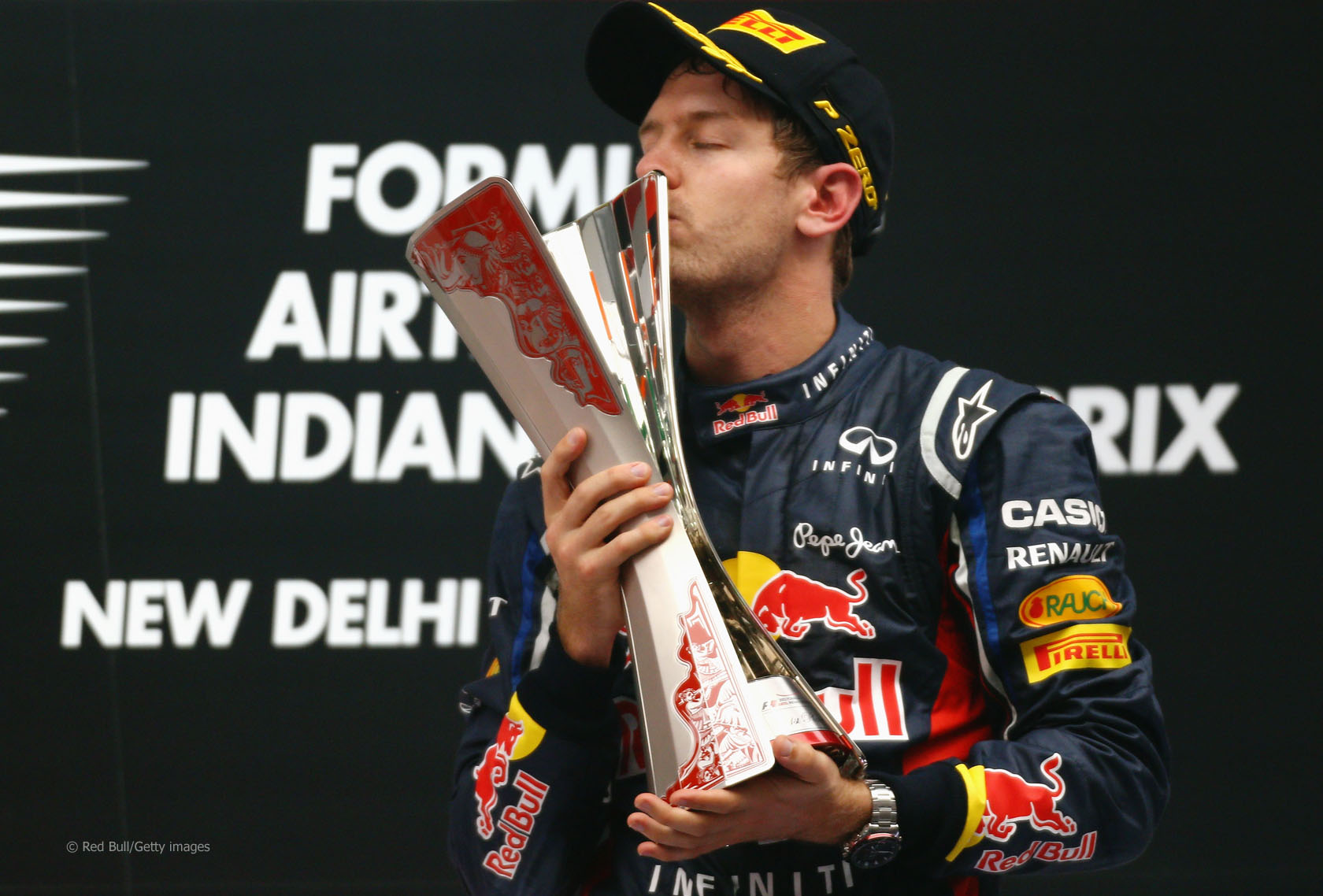 Sebastian Vettel edged away from Fernando Alonso in the drivers’ championship after scoring his fourth consecutive win of 2012.

Vettel had little to worry about as he led every lap for the second year in a row at the Buddh International Circuit.

Alonso limited the damage has best he could, rising to second place during the race, but was unable to keep Vettel from his fifth win of the year.

Alonso takes on the McLarens

Red Bull preserved the advantage of their front-row lockout at the start as their rivals furiously disputed third place. The McLaren drivers went side-by-side down the long straight as Alonso appeared alongside them heading to turn four.

Lewis Hamilton lost out to the Ferrari despite diving back down the inside of Alonso at turn four. He ran wide, allowing Alonso to claim the position back.

While the Red Bulls made good their escape Button temporarily held third place. But he was soon passed by Alonso and Hamilton, who simply out-gunned him on straight line speed in the DRS zone.

Already up to third, Alonso began a race-long pursuit of Mark Webber. The gap between the pair of them crept up for most of the first stint, reaching over four seconds.

Most drivers were aiming to get through the race on a single pit stop. Surprisingly, Sergio Perez was the first to hit trouble with his tyres and was passed by Nico Hulkenberg in the DRS zone.

Perez made an early pit stop on lap 14 and dropped down the running order. He then picked up a puncture while passing Daniel Ricciardo, and incurred car damage which forced an early retirement.

Kimi Raikkonen spent a frustrating stint stuck behind Massa, his Lotus’s poor straight-line speed leaving him unable to launch an attack even when Massa made an error late in the first stint.

That prompted Lotus to try to use the ‘undercut’ to get Raikkonen ahead. On lap 27 he was told to pit if Massa didn’t – the Ferrari stayed out, so the Lotus came in.

After Massa made his pit stop the pair were side-by-side heading to turn three – and then appeared to compete over who would be the last to reach the DRS activation line. Massa won the unusual contest, and although he followed Raikkonen onto the straight he was easily able to activate his DRS and re-pass the Lotus.

The other Lotus of Grosjean had started on the hard tyres. He briefly ran as high as fifth before being passed by Hamilton after the McLaren driver’s pit stop. Following his late change to softs Grosjean gained on Hulkenberg. But faced the same problem as Raikkonen had with Massa – he was simply unable to get on terms with the Force India on the straight. The single round of pit stops produced no change in the running order at the front, though Alonso gained on Webber and was briefly able to put him under pressure in the DRS zone before dropping back.

Hamilton remained fourth after an impressively slick McLaren pit stop which included changing all four wheels plus Hamilton’s defective steering wheel with no loss of position, or much in the way of time.

Back on the track, Hamilton edged closer to the Webber-Alonso battle for second. That dispute was resolved when Webber suffered a KERS glitch, allowing Alonso to pass him easily in the DRS zone.

Hamilton produced a series of quick laps as he closed on Webber’s ailing RB8. But he only got within DRS range in the final two laps, which proved too little too late.

There was further cause for concern on the Red Bull pit wall as sparks began to appear from beneath the front of Vettel’s car. The problem was immediately relayed to Alonso, who redoubled his efforts to reduce Vettel’s 11-second lead.

The Ferrari driver had hit down to under ten seconds when he went off at turn 14. The tarmac run-off meant he only lost a second to Vettel, but it finished off any hopes he had of catching the only driver left in front of him, and the one he most wanted to pass. Button had a quiet run to fifth while Massa held off Raikkonen for sixth despite running low on fuel – he pulled to a stop shortly after crossing the start/finish line.

Hulkenberg did the same after finishing eighth, though he was unsure why the team had told him to stop. Grosjean finished on his tail in ninth and Bruno Senna claimed the final point after a battling drive, passing Nico Rosberg and Pastor Maldonado on the way.

Maldonado joined Perez in spinning off with a puncture, his caused by contact with Kamui Kobayashi. In all, three drivers suffered the same fate as Michael Schumacher picked up a puncture from Jean-Eric Vergne on lap one.

The delay cost Schumacher almost a full lap and he found himself being lapped by the leaders within minutes of the start. Hamilton was one of several drivers who complained about how slowly Schumacher responded to the blue flags, which the stewards will look into after the race.

Schumacher pulled in with five laps to go. The other Mercedes of Rosberg finished outside the points in 11th, followed by an unhappy Paul di Resta who had struggled with drag on his car early in the race.

Toro Rosso’s run of points scores came to an end as Ricciardo and Vergne were 13th and 15th, separated by Kobayashi. Maldonado’s puncture left him 16th followed by the Caterhams and Marussias.

Narain Karthikeyan was the last running driver in his home race after Pedro de la Rosa crashed out with another HRT brake failure.

Vettel’s fourth consecutive victory means his lead in the championship has increased to 13 points. With three races to go and 75 points left to be won he is far from safe yet, and Alonso knows that if Ferrari can produce some more pace from his car in the final races he is still in with a chance of winning this championship.