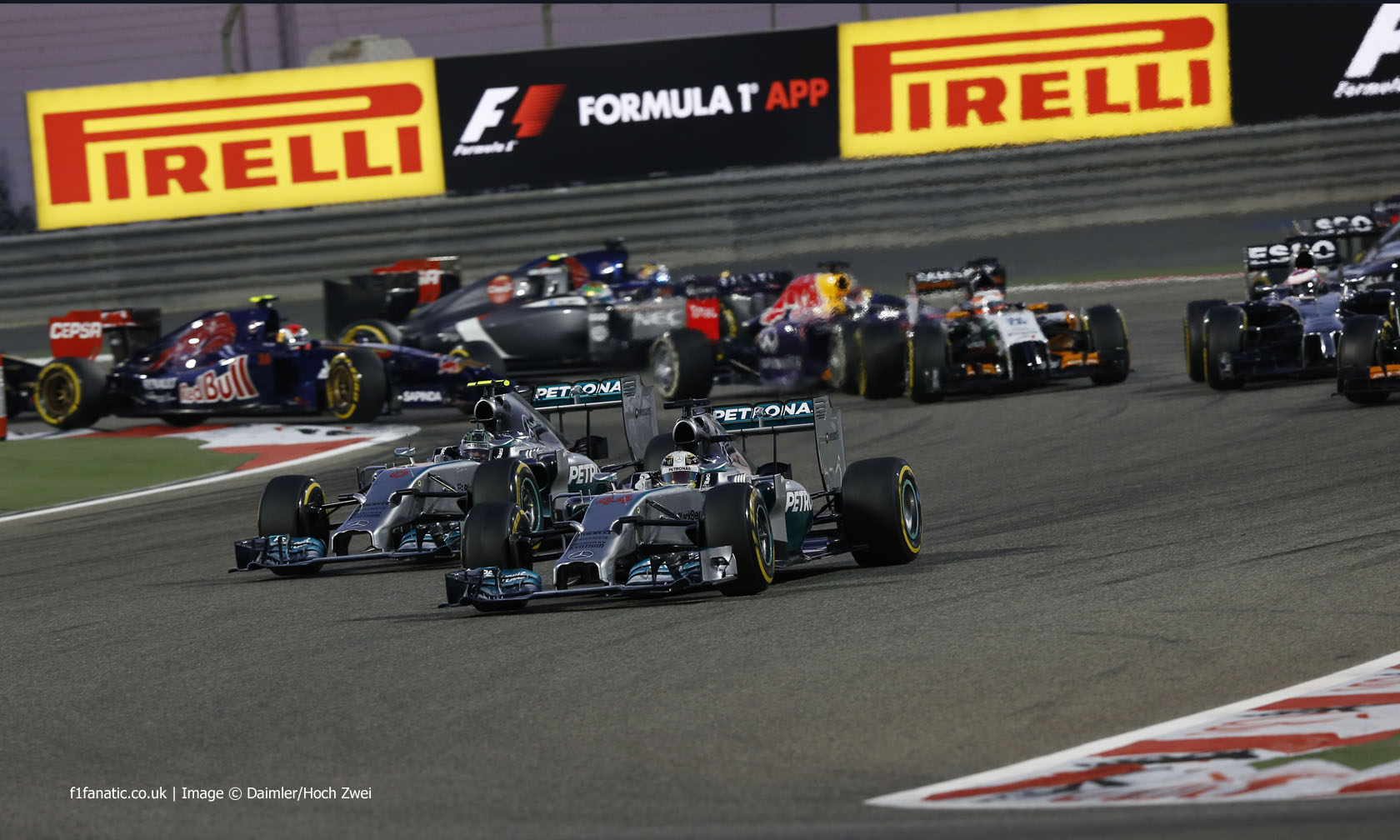 Ferrari made the question of how well the public is responding to the new Formula One a major point of debate when it sent out a press release a week ago claiming 83% of fans did not like the new rules.

Despite the many obvious and serious flaws in Ferrari’s methodology and interpretation their poll was taken at face value by many in the media and reported without question or criticism as an accurate reflection of fans’ views.

But there was no room for debate over what most fans made of Sunday’s race. The Bahrain Grand Prix proved a hit with fans, recording the fourth-highest score on Rate the Race since it began in 2008 (fractionally lower than the 2011 Canadian Grand Prix), the best since the 2012 season finale.

Whether it was thanks to the new rules, the tyre compounds or a helpfully-timed Safety Car, this race instantly undermined the complaints of those who had criticised the sport mere hours before the start was given.

And perhaps the track configuration should take some of the credit: Bahrain produced the highest-rated race of 2013 and unless one of the remaining rounds can top that humdinger of a grand prix, it looks like it will do again.

But to conclude based on this race that all is well in the world of Formula One would be to make one of the same mistakes Ferrari did with their poll. The Rate the Race results for the first three races of 2014 present a mixed picture.

F1 is still capable of thrilling us the way it always has. But how good the races to come will be depends on whether the two Mercedes drivers remain this closely-matched, and if the team’s rivals can reduce their daunting margin of superiority.

A loud thank you to the teams for keeping team orders to an absolute minimum. They seem to have learned the lesson, and despite the nail-biting moments for them, when their drivers battle it out against each other, they let us enjoy the show and the drivers get to compete fairly.

The absence of team orders, the new formula of F1 and the Safety Car provided us with a race to talk about for years to come.
@Palle

This is different to 2011-2013 – while we have one team which is undeniably stronger than the rest, we seem to have two drivers who are relatively evenly matched and who are allowed to race. No ‘Multi-21 here’.

At the moment, Rosberg is leading and on the pace, though I think Hamilton is the more complete racer.

In previous years how many times was Mark Webber anonymous in races where Vettel ran away with it? This reminds me more of Prost versus Senna in 1989 or Hill versus Villeneuve in 1996 than Schumacher in 2000-2004 or Vettel in 2011.
@TBone

The only reason I gave this race a nine is because it didn’t give me that final tick that I give races ten out of ten for. It’s difficult to put my finger on it, but I’ve given 10/10 to races like Canada ’11, Valencia ’12 and Brazil ’12. I couldn’t quite rekindle that feeling during this race.

Not saying that the race was boring. Far from it. Battles all the way down the field, and a conveniently timed safety car which bunched it all up with 10-12 laps to go to show us what the cars can really do.

Mercedes walkover? Maybe, but surely this now gives us a similar scenario to ’88. The top team has two great drivers who will want to do anything they can to win. That’s only going to result in great battles for the lead at various moments throughout the year, which can only be good for the fans.

And if they both retire? Then that just means the epic scrap we had between Force India, Williams, Red Bull etc… is for first place rather than third.

This really is shaping up to be one of the best seasons of F1 ever.
@KeeleyObsessed

I look at it this way the FIA introduced these new rules to cut spending but if you look into it Mercedes have spent a awful lot of money on the new engine. Formula One is no longer exciting any more if we keep seeing Mercedes dominate this season and the next what would these new engines have achieved.

On this site a lot of people are giving the race ten out of ten but I am confused as to why they would. After ten laps at the start of the race Mercedes where way out front to me that is not exciting racing at all.

They had this lead all the way up to the Safety Car, where after that they pulled out a 20-second gap in another ten laps. Yes there were some great battles behind but still there where just two drivers from the same team battling at the front. For me that is not entertaining motor racing.
@Mrjlr93

The Ferrari fan inside me is crying in the deepest corner of my heart.

But the F1 fan inside can’t stop smiling for what I consider to be one of the best 100 minutes of my life.

Politics aside, there isn’t the interest there for F1 and that was very apparent in the half-empty stands. You can hear the crowds this year and in any traditional F1 country they would have been deafening with action like that!
@Bigwilk

I truly believe the track layout made this race: start/finish straight, another straight, then the quick left-right. That first half of the lap might not be the most inspiring layout in terms of one lap, but for a race it makes for fantastic viewing and has done for a few years now
@Hobbsy009

Awesome. Ten out of ten and I’m not a Hamilton fan. Can we shut up about the sound now? Thanks.
Liam McHugh (@Cluckyblokebird)

After this fantastic Formula One grand prix, please stop showing us the likes of Luca di Montezemolo, Adrian Newey and other frustrated guys. Let Ferrari build a better car and power unit and Renault also built a better power unit. The rules are the same for everybody.

I’m an Alonso and Ferrari fan and that race was a ten out of ten. Most exciting in years. It was about the performance differences between teams, that’s why team mates were together and we don’t get that many intra-team battles in a single race… ever. Super fun to watch and can’t believe Rosberg couldn’t get past and keep position despite being on softs.
Nesto