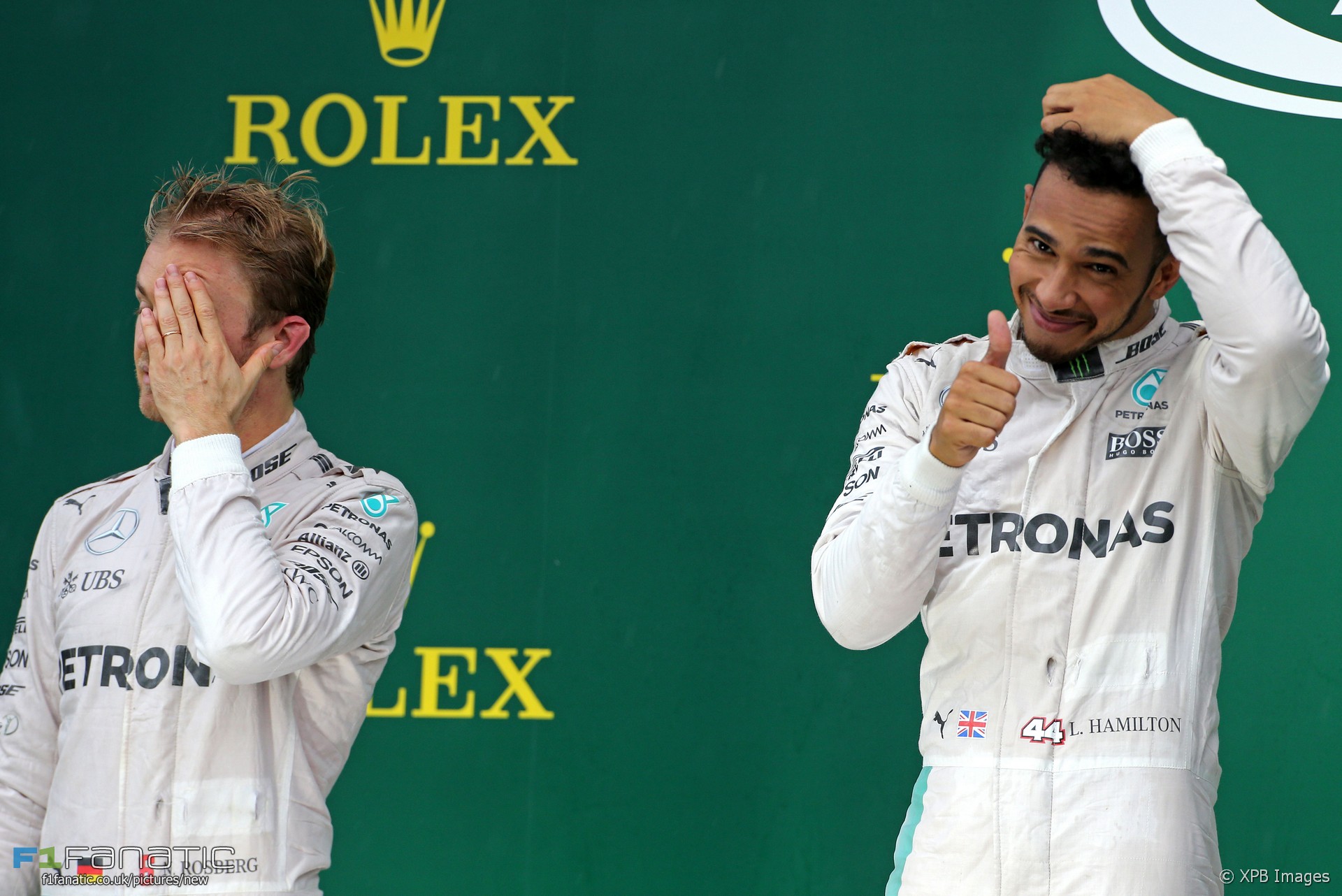 “I’m faced with pretty impossible odds,” was Lewis Hamilton’s assessment yesterday of his chance of winning the title in the upcoming season finale.

On the face of it he’s not wrong. Based on all possible outcomes in Sunday’s title-decider, Nico Rosberg’s chance of beating Hamilton to the title is almost 90%.

But, as also mentioned last week, the likelihood of that outcome happening is a different matter. It’s a matter of interpretation how remote Hamilton’s title chances* really are. Here’s three possible views.

*Of course we could do all the same calculations for Rosberg’s title chances. But Hamilton’s quote has prompted this article and it’s much easier to work out his odds as there are far fewer ways he can win the title compared to his team mate.

The strongest guide we have to the drivers’ current form is their finishing positions this year. Simply by looking at the results of the 20 races so far and considering what those outcomes would mean on Sunday we can get a rough idea of Hamilton’s chances of victory.

Four of the 20 previous races produced an outcome which would make Hamilton champion if they happened again on Sunday. That would give Hamilton a 20% chance of winning the title. But we can refine this figure further.

Those 20 races give us probabilities for each driver’s chance of finishing in each position:

Hamilton can only win the title on Sunday if he finished on the podium and Rosberg is further down the order. The above data allows us to estimate the odds of both drivers finishing in a position which serves Hamilton’s needs.

We can repeat this for the chances of Hamilton finishing second or third. As you’d expect the prospects of this happening are much slimmer: just 1.88% and 1.25% respectively. But it adds up to a slightly better overall chance of Hamilton winning the championship: 23.58%. But that still means Rosberg has a better than three-quarter chance of taking the title: 76.42%.

Although drivers prefer not to admit it, they do perform better at some circuits than others. However looking at past races in Abu Dhabi gives us so little meaningful data there’s little oint in trying to predict an outcome based on it:

The title contenders have only lined up at Yas Marina as team mates on the three previous occasions. Of those, Rosberg has prevailed twice and retired once with a technical problem while running behind Hamilton.

But even these results are open to a wide degree of interpretation. In 2013, for instance, Hamilton’s qualifying effort was hampered by a suspension problem. And Rosberg’s victory last year came after Hamilton had already secured in the title, prompting many to suggest he was ‘phoning it in’ at the wheel.

A repeat of 2014, where Rosberg was struck by a power unit problem while running second, would secure the title for Hamilton. This might even be considered a ‘fair’ outcome, as Hamilton lost a likely win to a breakdown in Malaysia, while Rosberg has had no equivalent misfortune.

But don’t count on the ‘law of averages’ helping Hamilton. The belief that bad luck evens out over a period of time is a popular misconception known as the ‘gambler’s fallacy’.

For example, if you toss a coin there is a 50% chance that it will land heads-up. If you toss the same coin four times in a row and it comes up heads every time, the odds it will come heads up the next time remains 50%.

Making no assumptions about the quality of their equipment, Rosberg is no likelier to suffer a mechanical misfortune than Hamilton this weekend. Rather, the fact Mercedes’ cars have only dropped out due to technical problems in 2.5% of races they have started this year tells us Rosberg’s chances of retiring are very low.

These mathematical models are blind to the human element of racing. Winning a championship is the culmination of more than just a year’s work: drivers dedicate their careers and devote their lives to this purpose. The pressures involved are huge.

That’s why Formula One history is replete with examples of stunning turnarounds when the title hangs in the balance at season’s end.

Hamilton knows from bitter experience how a seemingly invulnerable championship lead can crumble. He looked certain to land the title in the 2007 finale but he slipped back into the pack, suffered a gearbox glitch, and the silverware went to Kimi Raikkonen.

The following year Hamilton snatched victory from the jaws of defeat on the final lap. Since then we’ve seen Fernando Alonso come agonisingly close to winning the title in 2010 and 2012, with Sebastian Vettel the benefactor both times.

Perhaps the most encouraging statistics for Hamilton is that over a third of the occasions where the title has gone down to the last race the championship lead changed hands at the final round:

How will the title be decided?

There’s no doubt Hamilton is in great form at the moment having won the last three races from pole position. But as already discussed he needs to do more than that to win the title.

In an ordinary race his best chances of taking the crown involve Rosberg either suffering a technical fault or being beaten by two other cars. The Red Bulls are the greatest threat to him, and he was beaten in a straight fight by them in Germany.

Outside of those possibilities, the only other option for Hamilton may be to find some way of delaying Rosberg and provoking one of their rivals to overtake him. But that’s a risky strategy, and one he may only turn to as a last resort.