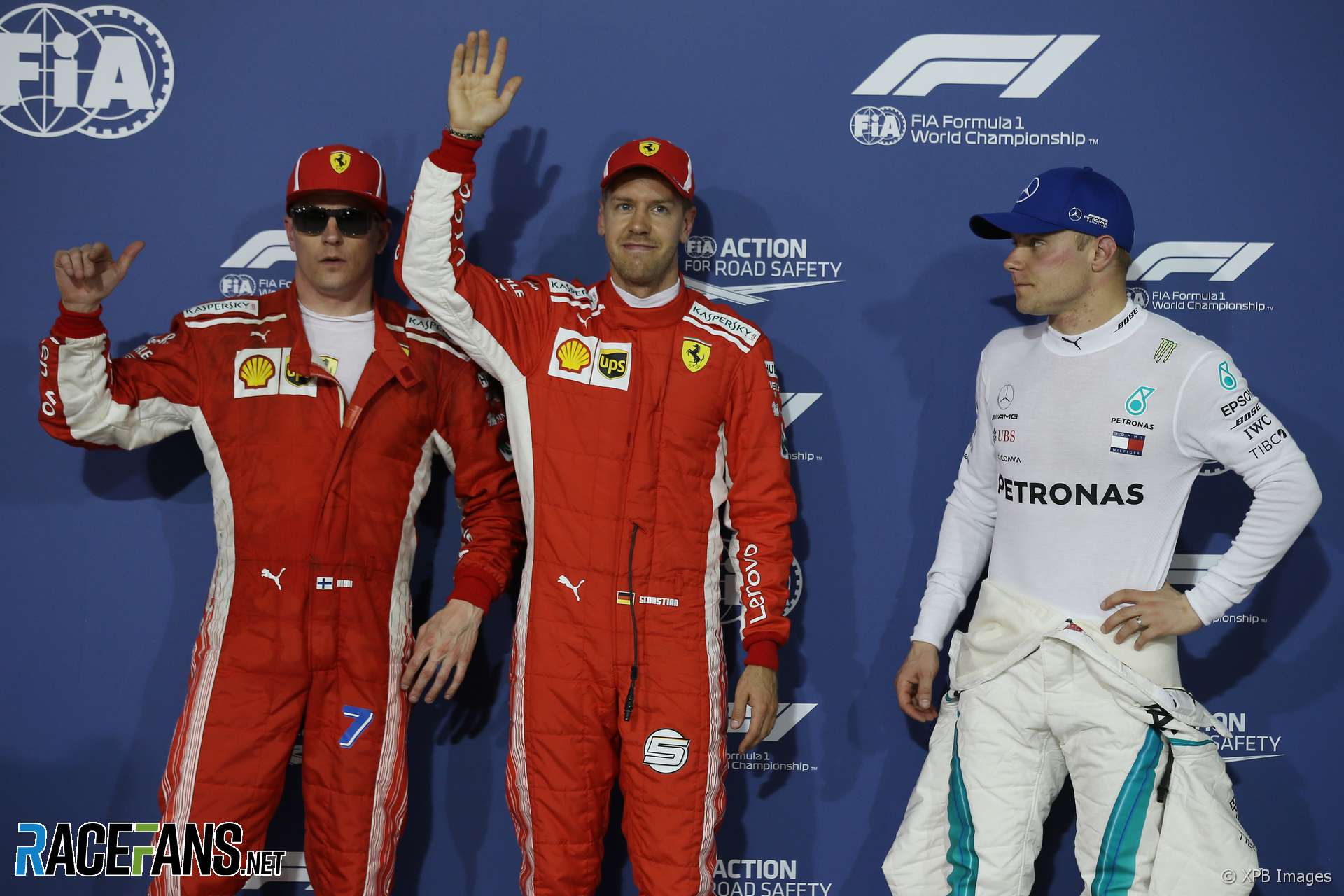 Sebastian Vettel ended Mercedes’ five-year run of pole positions in Bahrain as Ferrari claimed the front row of the grid for Sunday’s race.

The Mercedes pair were bumped back to the second row of the grid, though Lewis Hamilton will fall to ninth after his five-place penalty is applied.

Daniel Ricciardo was the only Red Bull driver to reach Q3 after team mate Max Verstappen crashed in the first part of qualifying.

The Ferrari pair and Valtteri Bottas made their way through Q1 without using the super-soft tyres. Running on the harder soft tyres, they occupied the top three places after their runs, the Mercedes trailing the red cars by two-tenths of a second.

Verstappen got closest to them on the super-softs but was continuing to push when his Red Bull got away from him at turn two. He spun off in a near carbon copy of Marcus Ericsson’s mistake in second practice yesterday, but the RB14 made it all the way to the barrier and wrecked its front-left corner.

Verstappen was unhurt, but his participation in qualifying was over. The red flags flew while his car was recovered.

The session resumed with five minutes left and several drivers eager to improve having lost time when DRS was disabled due to an earlier yellow flag. They included Fernando Alonso, who was frustrated at having to run again.

It nearly got a lot worse for Alonso. His last effort put him 12th initially but as his rivals improved he slipped to the cusp of the drop zone. Among the last to run was Romain Grosjean, who had spoiled his first run by running wide at turn one. On his last run he went wide at the final corner and crossed the line with an identical lap time to Alonso.

As the McLaren driver had set the time first, Grosjean was out. He apologised to his team on the way back to the pits. Charles Leclerc was also in a chastened mood after spinning off at the last corner, ending up 19th. Team mate Ericsson was also eliminated along with the Williams pair.

Both Toro Rosso drivers made it through, Brendon Hartley joining his team mate despite an unlucky incident on his first lap. Hartley struck a bird at turn seven, leaving him with front wing damage.

Facing an inevitably five-place grid drop due to his gearbox change penalty, Hamilton elected to start the race on soft tyres, which meant he had to run them for his flying lap in Q2. Encouragingly for Mercedes, he ended up second, one-tenth slower than Vettel managed on the super-soft tyres.

Nico Hulkenberg had suffered a loss of power at the end of his first run in Q1. There was no repeat of the glitch on his flying lap at the end of Q2 which put him an impressive sixth, six-tenths of a second quicker than his team mate Carlos Sainz Jnr, who also reached Q3.

They were joined by the sole remaining Haas of Kevin Magnussen, Gasly’s Toro Rosso and Esteban Ocon in the Force India. Hartley missed the cut by a tenth of a second.

Both McLarens failed to progress any further, the pair being the slowest of the cars which ran in the second part of qualifying.

While Mercedes could get close to Ferrari’s pace on the soft tyre, Q3 exposed their weakness on the super-soft. The red cars consistently had the edge on them around the Bahrain circuit on the softer rubber. Raikkonen led the way after the first runs after Vettel slipped up at the final corner.

Hamilton could only manage third with his first effort. His predicament worsened on his final run where he lost time in the first two sectors, rendering his quickest run through the final sector irrelevant. Adding insult to injury, Bottas improved with his final run to claim third.

The Ferrari drivers also swapped positions on their final runs. Raikkonen blamed traffic while Vettel became the only driver to lap the Bahrain circuit in under 88 seconds, claiming pole position as he did.

From the tightly-knit midfield Gasly produced a stellar run to take sixth, which will become fifth after Hamilton’s penalty. He beat Magnussen’s Haas by less than three-hundredths of a second.