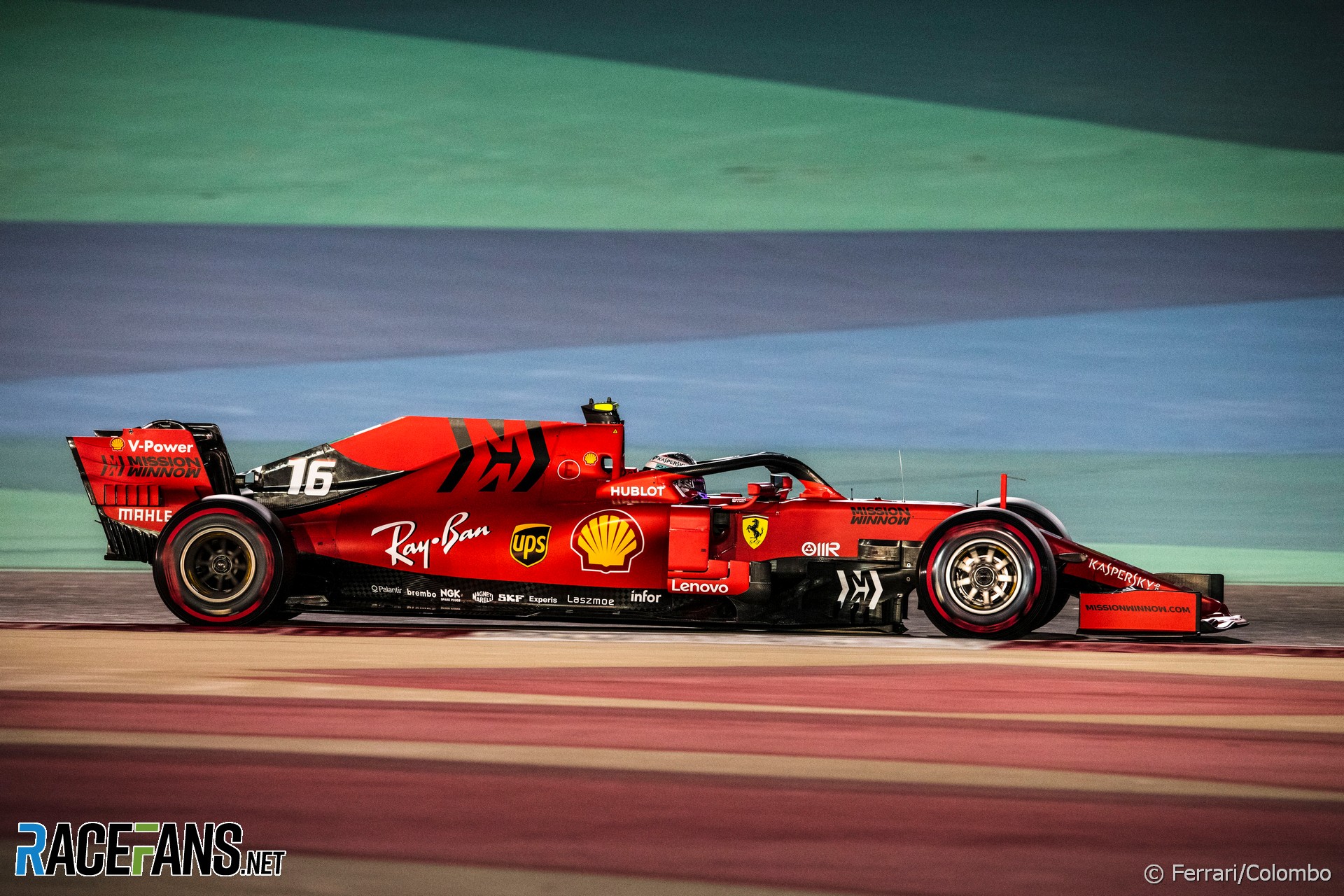 Which drivers have impressed over the first half of 2019? Here are the seven drivers who didn’t quite make it into our top three.

There are fewer drivers on the grid this year who are harder to place in the rankings than George Russell. Having comprehensively out-paced Robert Kubica so far, Russell serves the measure for how competitive Williams are. For the most part they’ve been a long way off the pace, so much so he’s usually had little opportunity to race with other cars.

That has changed over the last few rounds, however, as Williams have finally made enough progress with the FW42 that the tail end of the midfield is within reach. Russell has risen to the opportunity, and in Germany could have delivered a great result for the team if they’d heeded his call to switch to slick tyres. This was an opportunity largely squandered by the team, though Russell would have bagged the final point if he hadn’t subsequently gone off at turn two, allowing Kubica through.

On many other occasions Kubica hasn’t been close enough to Russell to benefit from that kind of error. In Austria Russell came close to lapping his team mate. In Hungary the team’s latest upgrade and Russell’s improved understanding of the tyres aligned and he nearly took them out of Q1 for the first time this year. He sustained that performance in the race as well, though with almost all the other cars finishing he only got 16th, which was less than he deserved.

Having racked up the titles in his junior career, much was expected of Lando Norris on his graduation to Formula 1. And he delivered it the first time of asking, taking a superb eighth on the grid for McLaren on his debut in Australia. In the race he was somewhat cautious at the start and lost ground, finishing out of the points.

He’s since made amends for that with several profitable excursions into the top 10. He remains somewhat cautious at the starts, though this has largely helped him steer clear of costly incidents, except in China where Daniil Kvyat wrecked his race.

Unreliability problems account for part of the points gap between him and his team mate, which is wider than it deserves to be. Over his first half-season in F1, Norris has gone some way towards justifying the hype.

Although he was not immediately comfortable at the wheel of his new RS19, there was little sign that Daniel Ricciardo was playing himself in over the opening races.

As early as round three he took a best-of-the-rest ‘pole and win’, having edged new team mate Nico Hulkenberg by a mere four-thousandths of a second in qualifying. While Ricciardo has had the edge on Saturdays, it’s often been by little more than that.

At times he’s appeared to be trying too hard to make his Renault perform the kind of heroics a Red Bull is capable of. There was the over-optimistic lunge on Kvyat in Azerbaijan and his last-lap off-track excursions as he passed Norris and Kimi Raikkonen. He was penalised for all three, and unusually for Ricciardo has accumulated more penalty points than any other driver over the opening races.

But on his best days, Ricciardo has signalled that this new car and driver combination has the potential to come good. His qualifying lap in Canada ranks as one of the best of the year, beating not just his Red Bull successor but even one of the Mercedes. If Ricciardo and Renault can recapture that form in the second half of 2019, they could yet threaten McLaren for fourth in the championship.

Sebastian Vettel has out-scored his team mate in the championship so far, but has he out-driven him? On the balance of the 12 races so far, it’s been very close.

The qualifying scoreline, for instance, is very narrowly in Vettel’s favour. He leads Charles Leclerc 6-5, having been unable to set a time in Germany due to a technical problem, and on average the gap between them is so slight it makes no difference. The momentum, however, is clearly on Leclerc’s side, having started ahead of Vettel in all of the last five rounds.

In the races Vettel has come out ahead more regularly, especially when Leclerc’s two contact-related retirements are factored in. Yet while both drivers are yet to win a race this year, Vettel hasn’t got as close as often as Leclerc. In Canada he clung on by his fingertips until Lewis Hamilton forced a mistake out of him.

The only other race Vettel has led was Bahrain. On that occasion Ferrari tried to tell Leclerc to stay behind his team mate for a couple of laps, but Vettel swiftly came under attack from his junior team mate and could do nothing to contain him. It was a bad day for the four-times champion, who blew his chance to win later in the race when he fell into Hamilton’s clutches and spun.

Another low followed at Silverstone where he blundered into Max Verstappen while the pair were scrapping for position. It made for a stark contrast with Leclerc, who had fought doggedly with the Red Bull driver for lap after lap.

Encouragingly, Vettel seemed to have rediscovered his form heading into the summer break. He worked his way up from last to second in Germany, redeeming himself after his bitter retirement from last year’s race, and put one over Leclerc by nabbing third place on the penultimate lap in Hungary.

Exchanging a front-running car for one in the thick of the midfield fight seems to have agreed with Raikkonen. Consistency has been his hallmark, and he has steadily accumulated an impressive haul of points, enough to almost single-handedly put the team seventh in the championship.

If there’s a criticism to offer of his 12 races so far it’s that it’s lacked both conspicuous highs as well as lows (something which cannot be said of the previous driver on the list). He hasn’t led the midfield home once, yet there he is second in the ‘Formula 1.5’ class.

The ease with which Antonio Giovinazzi has got on terms with him in qualifying suggest there have been times Raikkonen hasn’t fully exploited the one-lap performance of the C38. But you can’t fault the job he’s done bringing it home every weekend.

Over the first half of the opening 12 races Bottas looked every bit like he was capable of denying Hamilton the championship, and praise doesn’t come much higher than that. He bagged wins in Australia and Azerbaijan, and was the ‘two’ in ‘one-two’ everywhere else except Monaco, where Verstappen’s pit lane foul relegated him from second to fourth.

He’s run Hamilton close in qualifying, taking as many pole positions as his opposite number, though only in Baku was he able to convert one into a victory. As the season progressed he’s found it increasingly difficult to stay on terms with Hamilton. The fought brilliantly at Silverstone, where Bottas was on pole again, but while a Safety Car ultimately cost Bottas the lead it looked like Hamilton was going to have him eventually.

The points gap between the pair of them widened over the last two races before the summer break. Eight laps from home in Germany it looked like Bottas was going to take at least a 12-point bite out of Hamilton. But he was making hard work of passing Lance Stroll, and spun into a barrier. A week later in Hungary he out-qualified his team mate again but fell behind him at the start and collected damage which ruined his race.

Bottas has measured up well against by far the toughest benchmark in the sport. For Mercedes to drop him at this point would be a tough verdict on his most convincing start to a season yet.

Any doubts over whether Leclerc deserved a place in Ferrari’s driver line-up after just one season of Formula 1 were quickly dispelled. He would probably have led his tyre-troubled team mate home in Australia if Ferrari hadn’t told their new star to stay behind the other car, which was lapping four seconds slower.

The following race was Bahrain, where Leclerc deserved to win. He parked his car on pole, brushed Vettel aside after briefly losing the lead, and was on his way to victory in his second race as a Ferrari driver when his power unit let him down.

Whether through reliability problems such as this, team orders in Australia and China or the kind of massive tactical blunder we saw in Monaco, Ferrari cost Leclerc a lot of points over the opening races. To his credit, Leclerc held his tongue and focused on another area which was costing him: his qualifying performances. But after Canada, where he chided himself after a lap almost seven-tenths slower than Vettel’s, something clicked.

Austria was another potential win which got away, this time as he was surprised by an uncompromising attack from Verstappen. He fought back strongly at Silverstone, where the team cost him a hard-won place with a slow pit stop, though he ended up on the podium again.

Germany, however, was a big wasted opportunity. Though a car problem hindered him in qualifying (though not as badly as Vettel’s did), the cards were falling Leclerc’s way on race day when he put his car in the wall. For him, this wasn’t as serious an error as his Baku qualifying crash. Arguably either might have cost him a win, which goes some way towards explaining why only Hamilton has led more laps than Leclerc has.