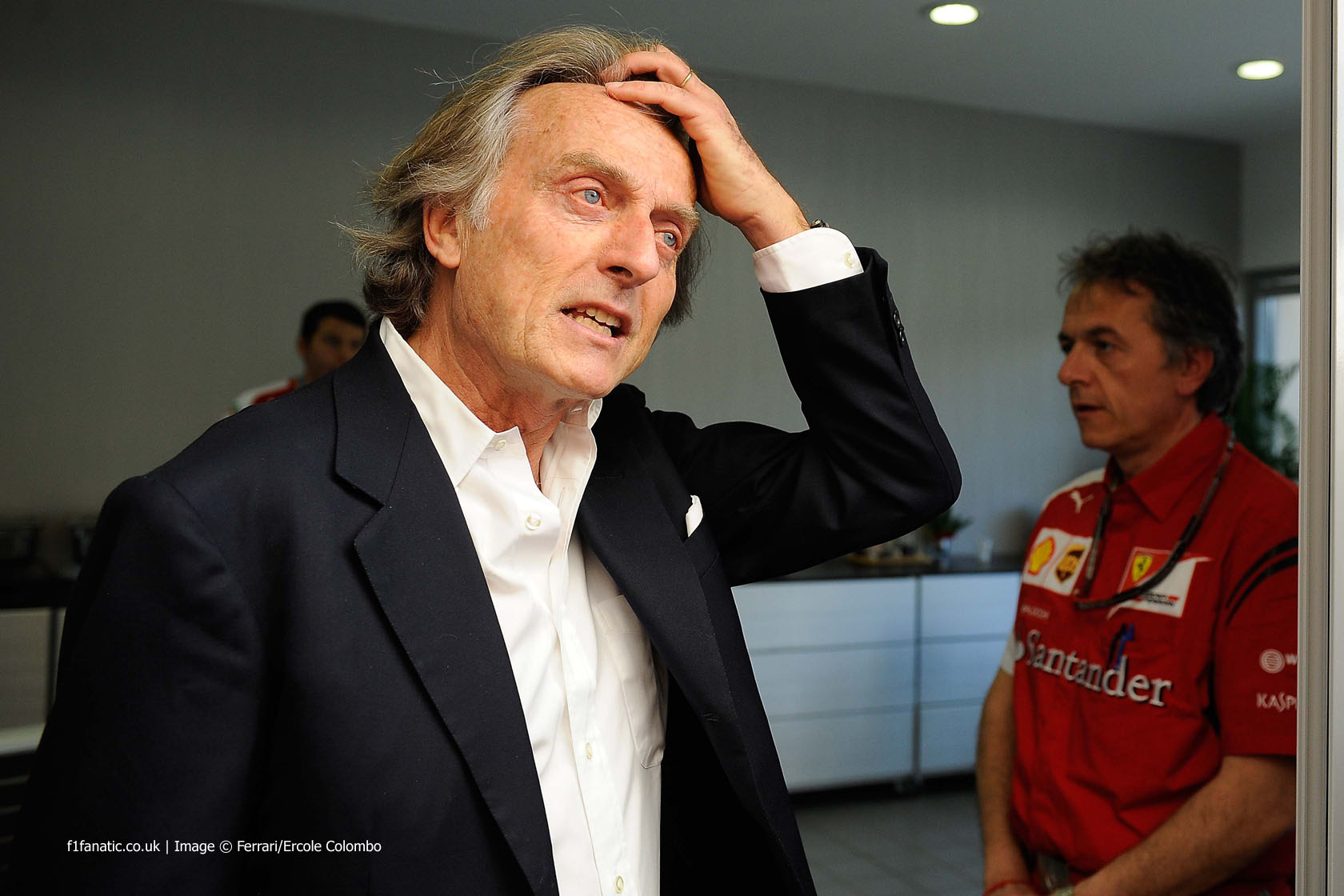 In the round-up: Ferrari president Luca di Montezemolo says he was pained by Ferrari’s lack of performance in Bahrain.

“Seeing a Ferrari so slow on the straight gives me pain.” Jean Todt: “This is not a banana republic, where someone turns up and says, ‘Let’s change.’ If you want changes, it has to be done through the regulatory framework.”

“We would like to have extra speed and to be able to battle with anyone. But at the moment it seems we miss on that aspect. We have some strong points that some other circuits will show.”

“The first suggestion was that we need 110kg (of fuel). And then, has anyone realised that you couldn’t fit 110kg into these cars? Ah, oh dear.”

“[Ferrari would] like to see more or less what I think is the right way to go. They’re supportive of what I would like to see done with it [F1].”

Force India deputy team principal Bob Fernley: “It’s totally unacceptable, and we’ll never change our mind on that. You can’t enrich and empower certain very strong teams, disenfranchise the rest and expect us to be happy.”

“I don’t think you go to hospital because you are on a diet.” Christian Horner: “We were pretty competitive at the end of the race..” (Adam Cooper’s F1 Blog)

“Both were totally co-operative where they worked together. Sebastian [Vettel] said I’ll let him through at Turn 11, sacrificing as little speed as possible, leaving Daniel [Ricciardo] to get on with his race. Of course it switched through the pit stops back again, and then they were free to race over the last sector of the race.”

Red Bull will not give in to Mercedes, says Horner (The Telegraph)

Horner: “For the first time we saw their true pace where they obviously went for it, and they’re not hanging about.”

The background to Bahrain (Joe Saward)

“Todt… insists on choosing a few friendly journalists and in consequence manages to alienate all those who were not invited. It is a brilliant way to make enemies and such a simple thing not to do.”

This article claims the official Formula One website is underperforming, citing data from Alexa. However there have been serious doubts in the past over the reliability of Alexa’s data.

“Clark, by rights, should have been taking part in the BOAC 500 at Brands Hatch, a round of the World Sportscar Championship that was vastly more important than a F2 race on a comparatively unknown German track (Hockenheim did not stage a Grand Prix until 1970). A contractual obligation with Lotus and Firestone meant the two-time World Champion had to forgo his drive in the Ford F3L sports car and take part in a series that was not recognized by British national newspapers, never mind television for which motor sport coverage of any kind was extremely rare.”

Celebrating and appreciating Mario Andretti (The way it is)

“‘I said I want to do Formula One,’ Mario recalls about that breakfast meeting with Chapman. ‘And Colin, said, ‘Right. You come on as number one.’ I wasn’t all that excited because his cars were junk. They hadn’t done anything in a few years. He was involved in his new car company and a boat company. The car company went public and he made a pile of money. That’s where his interests were at the time.'”

“Over the years there have been many great races at Long Beach, starting with Brian Redman’s victory aboard a Haas/Hall Lola-Chevy in the inaugural Formula 5000 race in 1975. Formula 1 arrived the following year and the race went from failure to success in 1977 when Mario Andretti scored the first of his four Long Beach wins driving a JPS Lotus 78. Mario’s win brought fresh excitement and popularity to F1 in America and with it the crowds at Long Beach surged.”

What an entertaining Race that was😊!Great day for us, really proud of the Team! So many good battles, really intense Race but great fun👍

From Bahrain to Brackley; raising a glass or two to congratulate everyone on a fantastic weekend! #MicCheck1212 pic.twitter.com/X6c0OalvpM

Technical Director Andrew Green addresses the HQ staff as we toast the results of the Bahrain GP. Cheers! pic.twitter.com/9Bl77fmkAZ

As you might expect, #f1 'strategy group' aka rule-making cartel will do nothing for the sport. The idea of new teams is laughable.

Well that spat with @clubforce was a total waste of energy and resources and purely to appease one man's ego. Watch and learn people

So I asked Bernie in Bahrain, if he was so concerned about fans, why not ditch double points? "Well, let's try & change everything," he said

In May 2011 Aldo Costa paid the prize for the under performing Ferrari. Yesterday he was on the podium with a dominant Merc … #justsaying

After yesterday whenever a team ruins a race with team orders they should be asked: "@MercedesAMGF1 trust their drivers, why don't you?" #F1

A new addition to the pitstop practice car. Ahem. pic.twitter.com/xKjE8xVNRW

Julien spotted a great stat about Mercedes’ start to the season:

Gilles Villeneuve took the lead of the world championship 35 years ago today by winning round four of the 1979 series at Long Beach.

Ferrari team mate Jody Scheckter was half a minute behind with Alan Jones adrift by a similar margin in his third-placed Williams.

However Villeneuve was rather fortunate to be allowed to start the race from pole position after botching the original start by failing to stop where he was supposed to. James Hunt, making one of his final appearaces as a grand prix driver, gives a characteristically forthright view on proceedings in this video:

70 comments on “Montezemolo pained by Ferrari’s lack of pace”