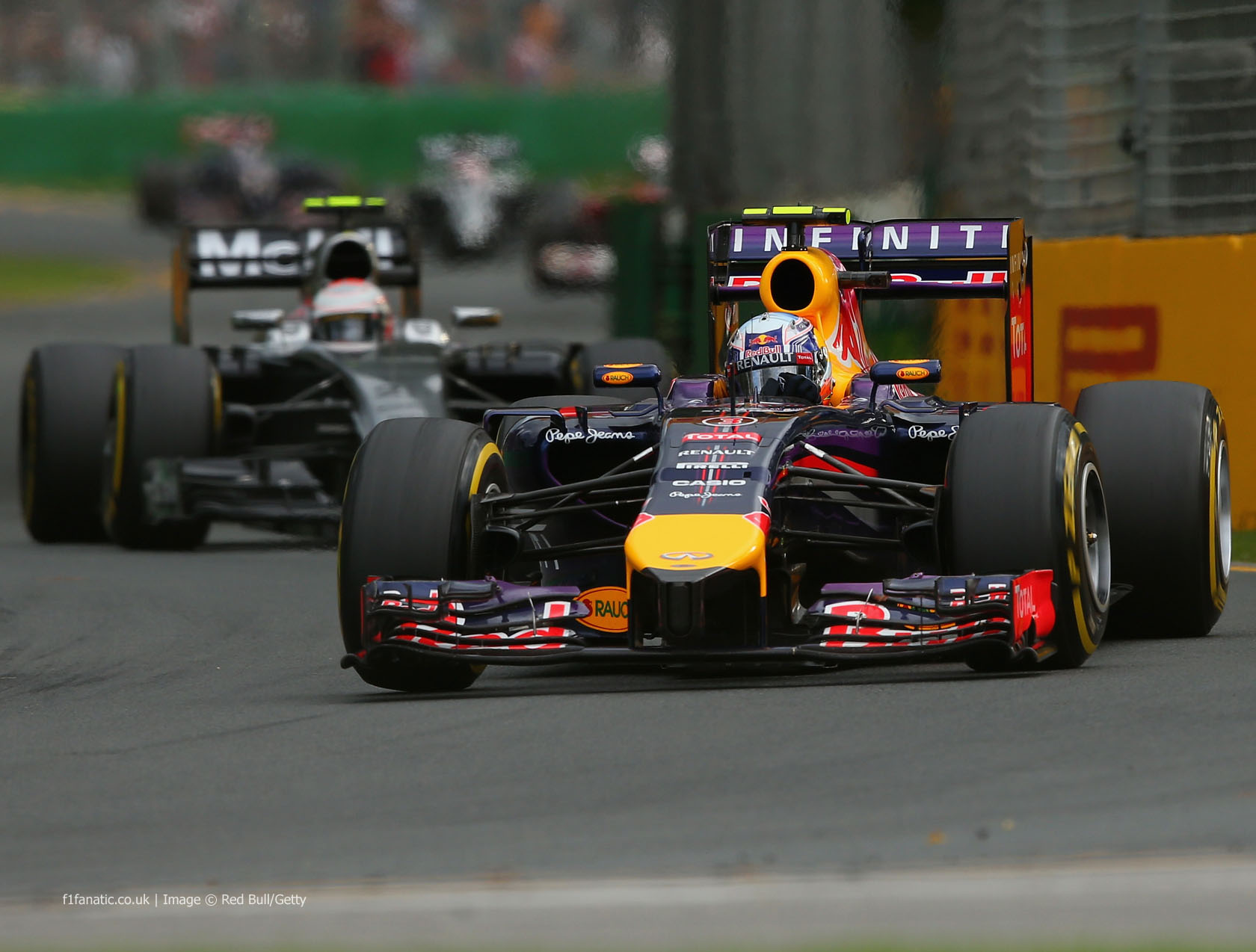 In the round-up: Mercedes urge the FIA at Red Bull’s appeal against their Australian Grand Prix disqualification to take a tough stance over the world champions’ actions.

“Mercedes came down hard on Red Bull, with their barrister Paul Harris asking the judges to ‘impose a further sanction that is to be suspended until the end of the season’ to prevent them from breaching the rules again.” “Red Bull’s chief engineer for car engineering Paul Monaghan: “Without an explanation and without any characteristic changes to the engine, be they measured or inferred by performance or measured by lap time, the [fuel flow meter] [sensor] changed its reading for P1 run four.”

“Bernie Ecclestone bribed a German banker because he feared losing his grip on Formula One motor racing, prosecutors will argue when the F1 boss’s trial opens next week in Munich.”

President of Italian Olympic Committee: “I don’t like this new F1” (Ferrari)

“I speak on behalf of Italian sports people and fans, I don’t like this Formula 1 and in my opinion it’s delivered a product that has absolutely no sense.”

“In my opinion there ought to be a set weight for ‘seat plus driver’ to which everyone adheres. Just take an accepted average and let’s get on with it. Let’s get back to racing being decided by skill rather than weight (within moderation of course).”

An evening with Mario (The Way It Is)

Mario Andretti: “I was given the notice by none other than Chris Economaki at Long Beach on the grid. ‘Mario,’ he said. ‘What do you think now that this is going to be your last race in Formula 1?” I think Parnelli forgot to tell me that they were going to pull the plug on the program.”

Feels weird being back at Imola, old feelings and emotions start coming back.

Nice to visit the Senna statue today at Imola. What do you think of it? pic.twitter.com/f5UnIIZRlw

Shame there is nothing for Roland, a simple plaque would of been nice.

Any team in F1 that says it's a profitable company,die even before they can taste what is that.How fast you wanna be?How much do you have?

It sure is kind of @InsideFerrari to take the media glare off @redbullracing over at the @FIA Appeal Court in Paris. #F1

WilliamB on what Mercedes got right and what Citroen got wrong:

I think yesterday we got a bit of a flavour of what the Bahrain Grand Prix would have been like had Mercedes not allowed Hamilton and Rosberg to race.

I refer of course to yesterday’s WTCC season opener in Morocco, where despite the fact that we had great drivers like Yvan Muller and Sebastien Loeb coupled with the new DTM-esque generation of cars, Citroen managed to manufacture a processional, over-controlled and frankly boring race by not letting the three dominant C-Elysees of Lopez, Muller and Loeb race.

My point is, the WTCC is clearly a commercial PR exercise for Citroen to boost road car sales (the huge investment Mercedes have put into their 2014 F1 programme make them guilty of this too), which is completely fine and rational, but to any intelligent team owner it is blatantly obvious that the racing culture is every as important, if not more, than the result.

The response to the Bahrain Grand Prix makes this plain to see, with Mercedes, in my book at least, getting as much kudos as Hamilton and Rosberg for letting them race, so why Citroen, why must you ruin potentially excellent races between three world class racers?
WilliamB (@William-Brierty)

Mario Andretti took third for Lotus. Also in the field that day was Desire Wilson, who finished ninth ahead of her Tyrrell team mate Gordon Simley.

Here’s a video of the race: