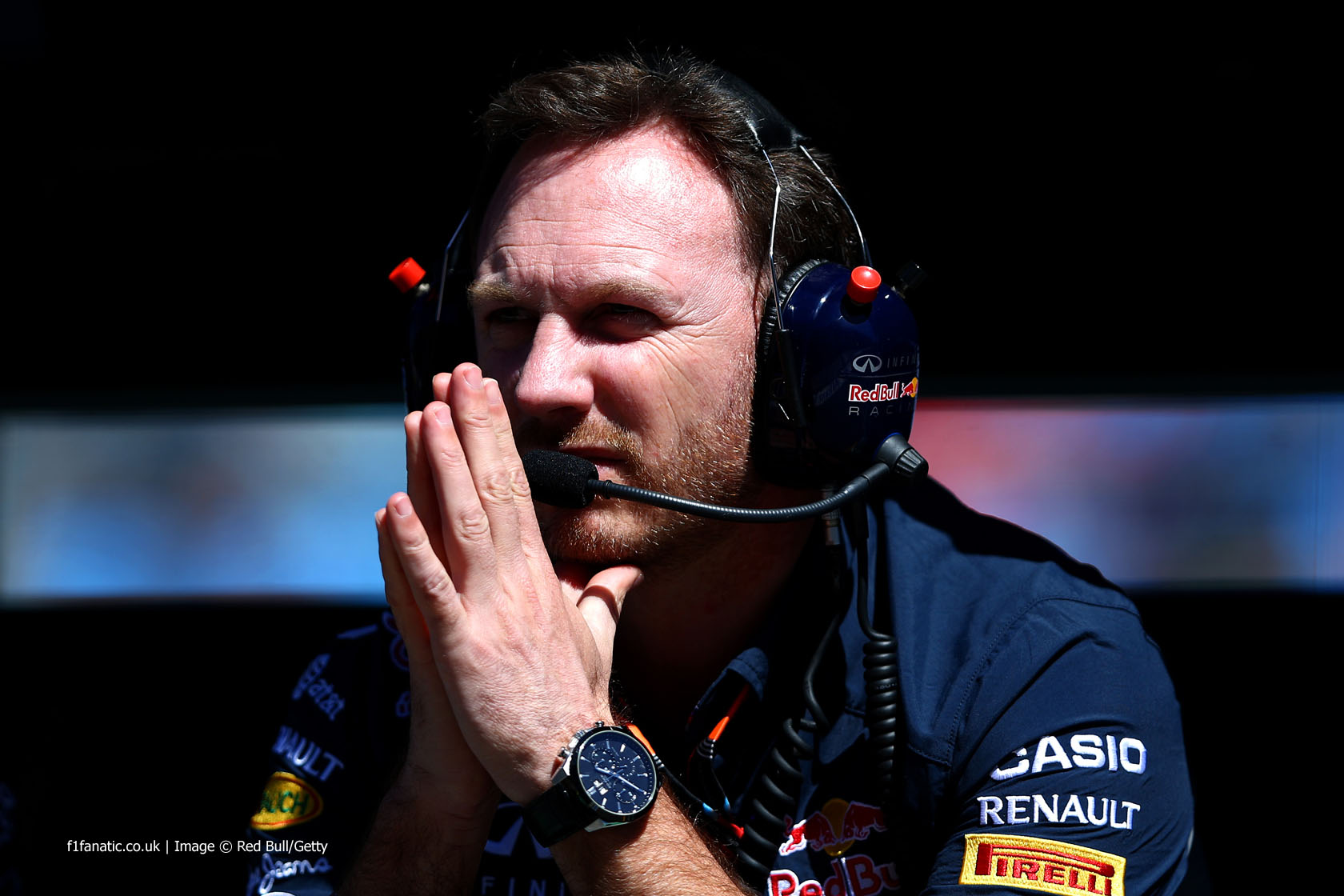 In the round-up: Red Bull team principal Christian Horner climbs down over his calls for engine performance in F1 to be equalised.

"Is that (equalisation) likely to happen? Of course it's not. Is it fundamentally right for it to happen? Probably not either."

"Initially I think it was called off by Niki (Lauda) and Toto (Wolff), now they've told (Rosberg) yes so I think they are using it now as a bit more of a PR thing rather than a proper invite so the answer is no."

Vettel: 'We must attack' (Ferrari)

"Do you imagine if I went there, they would really open up? I was joking, if you have an advantage you don’t want to give it out."

"McLaren prepared a hugely detailed 37-page internal report about the accident and has shared its contents with the FIA’s Charlie Whiting who, while not yet commenting specifically, shares McLaren’s belief that there is no evidence of a car problem."

"After seeing the data and watching the steering trace, my view hasn’t changed from what it had when I saw the data initially. I feel comfortable getting into the car and driving it."

"I put that on my forehead in my helmet to take up the sweat."

"It has only been one race, so to already have comments like this is what I find funny."

Valtteri Bottas: 'I really felt like someone had put in a knife...' (Adam Cooper's F1 Blog)

"We have a good idea, so we have changed the seat and pedal position quite a reasonable amount so the back is in a more neutral position in the car, so less pressure for the discs."

"We will deduct the race they missed from the prize-money. They will miss one 19th of it and they are going to get a bill for the free travel that we gave them."

Whether Ferrari, Mercedes or both nixed the 'Vettel-Rosberg debrief', a great photo opportunity was missed there. #F1

Sweet sweet music from our garage and our @ScuderiaFerrari powertrain, as we complete our planned fire-up! pic.twitter.com/WvV52A76vM

As @ManorF1Team fire one of their engines up for the first time here are the power unit components used so far. #F1 pic.twitter.com/uWT4fx0JXr

As track walks go, this is as tough as it gets. Only the bravest engineers headed out in the heat today. #MalaysiaGP pic.twitter.com/gwhgJSiKw6

Here's @LewisHamilton on his best passing move ever: "Buckmore Park, 1996, beating the odds with my Dad" #MalaysiaGP pic.twitter.com/y1uHyhnxGC

The Malaysian Grand Prix is in its 17th season but the country is yet to produce a second F1 driver to succeed Alex Yoong. Was building an F1 circuit without a racing infrastructure to support it a case of putting the cart before the horse?

I think there needs to be that grass roots support to create a proper culture of motorsport in any country. Kids need to be karting or sportscar racing from a young age, and there needs to be a decent level of competition. Otherwise it’s very hard to see how a Malaysian driver is going to come through the ranks and be good enough to find a seat in F1. You can send people off, of course, to Europe, the US, Japan, etc, where they will have access to those tiers. But in the UK there are thousands of kids racing almost every week, so the talent pool is massive.

F1 to me is the ultimate top step for drivers. If you want drivers from your country in F1, it’s not right to simply demand that F1 makes itself more attractive. Because to get to F1 there has to be that core enthusiasm for motorsport. That can only be kindled by making it aspirational – lots of Malaysian kids need to grow up with the dream of becoming racing drivers, and they will never have that dream in an environment where it’s impossible for them to achieve, and where they can’t see other kids like themselves also pursuing that goal.
@MazdaChris Porsche’s three 919s will run in these liveries at this year’s Le Mans 24 Hours – with Nico Hulkenberg driving one of them.

65 comments on “Equalisation ‘probably not right’ for F1 – Horner”