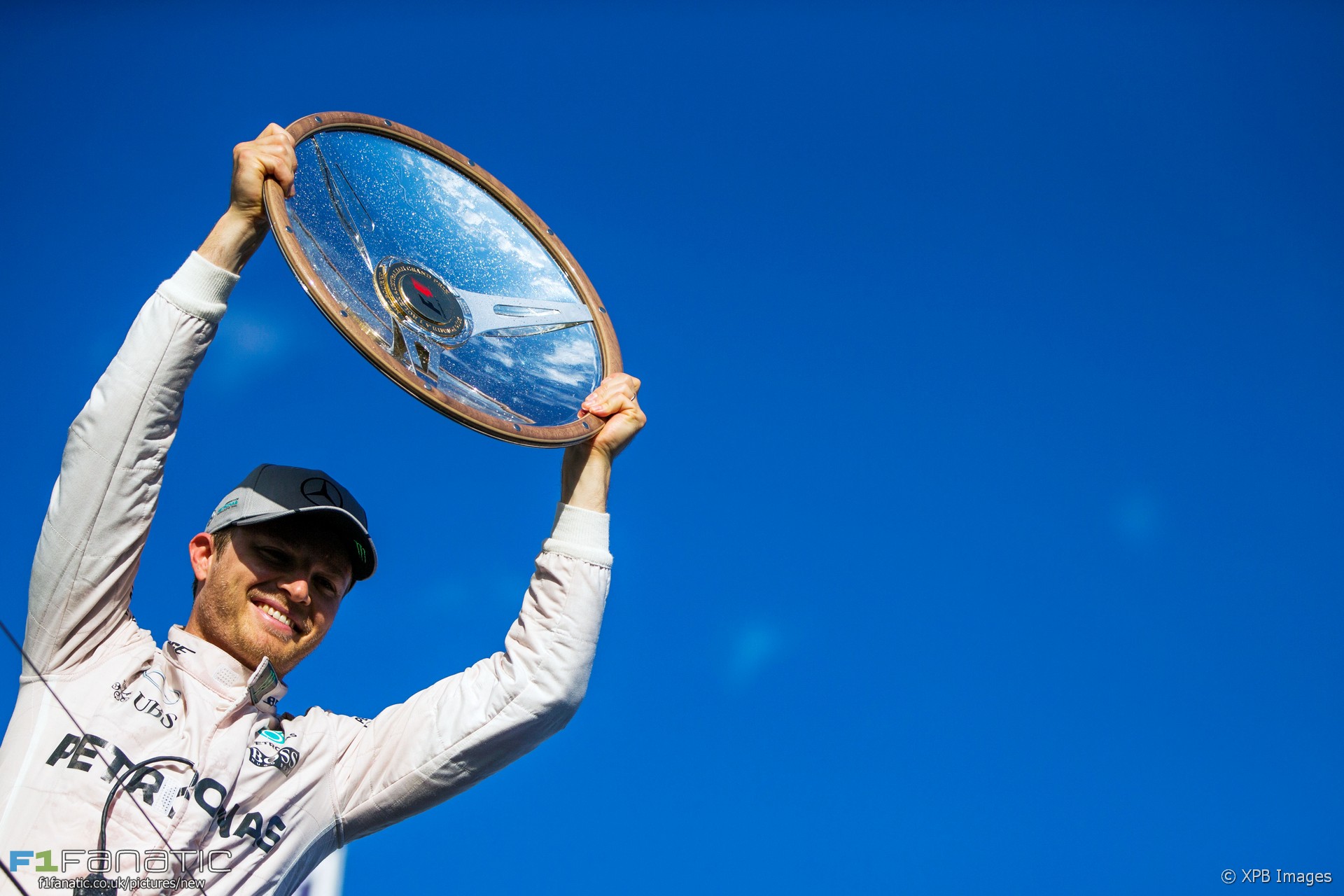 At the next round he has a chance to win a fifth race in a row which would be a rare achievement. Two years ago Lewis Hamilton became only the seventh driver in F1 history to do it.

However if Mercedes take another one-two in the next round, that would be a unique achievement. No teams has ever had more than five consecutive one-twos in world championship rounds. Ferrari have had five-in-a-row twice, in 1952* and 2002, and Mercedes did the same in 2014. The silver cars also had four consecutive one-twos prior to withdrawing from Formula One at the end of 1955.

Rosberg’s win was the 15th of his career which means he has now won as many races as Jenson Button. His season-opening victory means someone other than Hamilton is leading the drivers’ championship for the first time since the 2014 Italian Grand Prix, when Rosberg headed the table.

Hamilton had dominated proceedings in Melbourne prior to the start of the race, leading all three practice sessions and all three phases of qualifying, yet he didn’t lead a single lap of the grand prix.

His first pole position since last year’s Italian Grand Prix was the 50th of his career, making him the third driver to reach a half-century after Ayrton Senna and Michael Schumacher. With 20 more races to go, Senna’s tally of 65 pole positions and Schumacher’s all-time record of 68 could fall to Hamilton before the end of the season.

The fastest lap fell to Daniel Ricciardo. This was the fifth of his career, putting him level with Giueppe Farina, Carlos Pace, Jody Scheckter, Didier Pironi, John Watson and Michele Alboreto.

Ricciardo equalled the best result for an Australian driver in their home race with fourth place, where Mark Webber also finished in 2012. In the 20th anniversary of Melbourne’s first race as Australia’s round of the world championship, the country is still waiting to see one of its drivers score an official podium finish.

Webber unofficially went up onto the podium in 2002 after taking a shock fifth place for Minardi on his debut. And Ricciardo, of course, was on the podium two years ago before being disqualified from second position for a technical infringement.

The race ended the long-running practice of drivers only having two dry-weather tyre compounds available. Surprisingly as many as nine drivers used all three types during the race: Rosberg, Massa, Sainz Jnr, Verstappen, Palmer, Button, Nasr, Wehrlein and Ericsson.

None of the three rookies in the field scored points, but Rio Haryanto became the first Indonesian driver to contest a round of the world championship. With almost 250 million inhabitants, Indonesia is the fourth-largest country in the world by population. It is the largest of those to have an F1 driver after Alexander Rossi of the USA (population 320 million) lost his seat to, ironically, Haryanto.

But the most important milestone of the race was undoubtedly newcomers Haas scoring points on their debut. The significance of this should not be understated. No completely new teams have even tried to come into F1 in the previous five seasons. The three which arrived in 2010 were all a long way off the pace and two of them disappeared without ever scoring a point.

Sixth place was the best result for a completely new team (as opposed to a team with a new identity such as Brawn in 2009) since Toyota 14 years ago. To put that into perspective, Toyota was and remains one of the world’s largest car manufacturers and came into F1 with a budget vast enough for it to spend an entire year testing.

For those of us who began watching Formula One before the points system was extended to award the top eight and later the top ten, Haas taking a top-six finish has added significance. In old money, Romain Grosjean earned the team a deeply impressive point.

Have you spotted any other noteworthy stats and facts from the Australian Grand Prix? Share them in the comments.

*If we ignore the 1952 Indianapolis 500, which was a round of the world championship but was not run to F1 rules, Ferrari had six consecutive one-twos that year. However note that Ferrari did enter Alberto Ascari in that race.