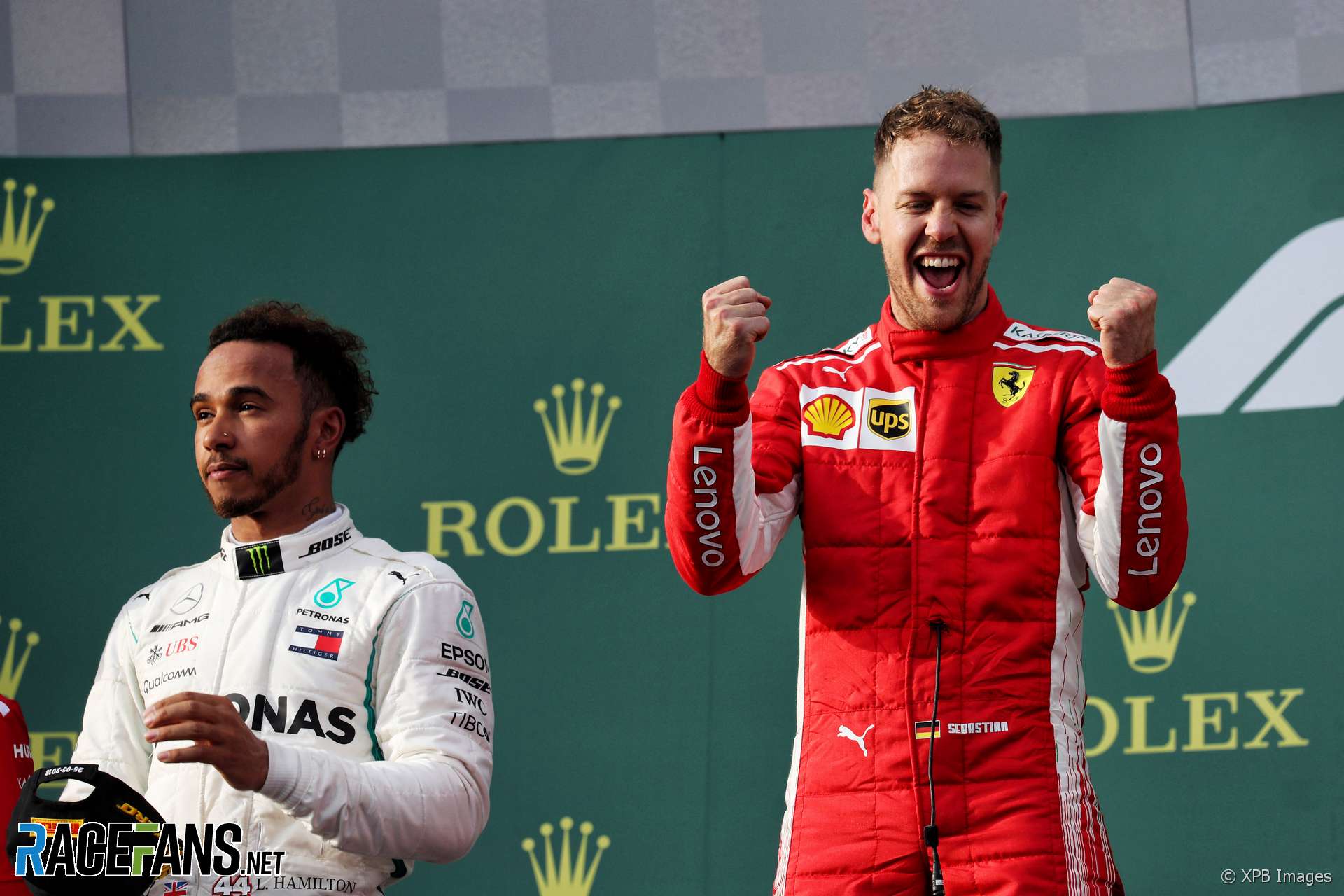 “We said ‘we have the VSC gap'”: But it turned out they didn’t. Here’s why Mercedes’ miscalculation added up to a stunning defeat for Lewis Hamilton in Melbourne.

How Hamilton lost the lead

On lap 16 of the Australian Grand Prix everything was going according to plan for Lewis Hamilton. He’d held his lead at the start and pulled 3.3 seconds clear of Kimi Raikkonen. Sebastian Vettel in the other Ferrari was almost four seconds more behind.

Raikkonen pitted at the end of that lap and Ferrari turned him around smartly: At 21.4 seconds, this was the second-fastest complete pit stop of the race. Pitting while the track was green cost him around 18 seconds.

On the lap before he pitted Raikkonen set his personal best lap time up to that point. This tells us Ferrari did not pit him because his tyres were losing performance: It was a strategic move, and the goal was to make Hamilton respond to Raikkonen’s pit stop immediately so the Mercedes driver would have to run a long second stint on soft tyres. As Ferrari had the luxury of Vettel running immediately behind Raikkonen, they could cover off both strategic options by leaving him out for longer.

Ferrari expected pitting Raikkonen would provoke Mercedes to pit Hamilton because the first driver to pit usually gains an advantage by being the first onto fresher tyres – the so-called ‘undercut’. That was the case at this race last year, where Hamilton gained nine-tenths of a second after his first pit stop.

But the undercut wasn’t as powerful this year – in fact, the opposite. As Raikkonen was the first one-stopper to pit, Ferrari was the first team to discover this. Having switched from ultra-soft tyres to softs (which are two ‘stages’ harder) his first full lap out of the pits was six-tenths slower than his last lap before he came in.

However by the time this was known Mercedes had already committed to bringing Hamilton in, no doubt expecting the ‘undercut’ would help them. Hamilton actually did a better job on his out-lap than Raikkonen: His first flying lap was only a tenth slower than he’d gone before pitting.

On lap 19 Hamilton was 13.3 seconds behind Vettel. Obviously this was not enough for Vettel to make a pit stop under green flag conditions and come out in front of Hamilton. But crucially if a Safety Car or Virtual Safety Car scenario occured, Vettel might have a chance of coming out ahead of Hamilton.

Mercedes were alert to the threat and warned Hamilton he needed to improve his pace. “Vettel still inside our Safety Car window by one second,” they told him. Hamilton responded, taking 1.7 seconds off Vettel by lap five. And that, Mercedes thought, was enough. But it turned out they were wrong. When Romain Grosjean’s Haas caused a VSC period Vettel pitted and rejoined the track narrowly in front of Hamilton. It won him the race. How did Mercedes get it so badly wrong?

Mercedes’ motorsport boss Toto Wolff explained their tactics before pitting Hamilton: “We were trying to maintain the current gaps, trying to build enough gap to Raikkonen to avoid the undercut, try to have enough gap to the Haas to avoid having a Safety Car gap. And then pretty much everything was under control.”

Raikkonen’s pit stop forced their hand, he conceded. “We took a little bit of a risk of putting Lewis on the soft to go until the end but it was the only choice to avoid Kimi jumping us. Pace was good.”

With Hamilton back out in front of Vettel they were left with Vettel to worry about. His only chance of staying ahead was if the race was neutralised.

“We calculated the VSC gap that was needed. And the computer said to us 15 seconds was the necessary time,” said Wolff. On top of that they added a margin of error. “So we were always within this three, four seconds margin. And then suddenly the cameras showed us the pit exit and Sebastian came out in front of us.”

According to Wolff, Mercedes were so certain Hamilton had a safe margin between him and Vettel they told him to moderate his pace before the VSC was deployed. “We said ‘we have the VSC gap, maintain the VSC gap, slow down, we have three or four seconds’. We knew we had that. But we didn’t.”

Wolff made it clear Hamilton had correctly followed the instructions they gave him: it was the instructions which were wrong. “It was down to a software bug or an algorithm that was simply wrong,” he suggested.

If Mercedes had got the VSC gap correct, would Hamilton have won? They suspect so: although Hamilton needed to look after his tyres more than Vettel did, the gap between them when the Ferrari rejoined the track was small.

“I think we would have been able,” was Wolff’s assessment. “Lewis knew that he needed to make it to the end on the tyre and drove to the target. He probably would have had the gap.”

Hamilton thought so too. “It was quite close between us, maybe a second or so,” he said. “If I had known that Sebastian was in my window I may have been able to make a difference, yes. Whether it would be enough, I’m not quite sure.”

Would it have made a difference had Valtteri Bottas in the other Mercedes qualified where he should have done? This was exactly the scenario Mercedes feared on Saturday.

It’s not hard to envisage realistic scenarios in which Bottas, had he started inside the top four, would have been a useful ally, either in running in front of one of the Ferraris or running close behind and pitting before them, inviting them to use the undercut.

“I don’t know if that for this specific situation it would have been different,” said Wolff when asked if the race would have unfolded different had Bottas not crashed on Saturday.

“It was clear we had to react to Kimi’s pit stop because the risk of the undercut was there. That means you have to commit to this one strategy and you are completely exposed to a Safety Car or a Virtual Safety Car. And this is what bit us today.”