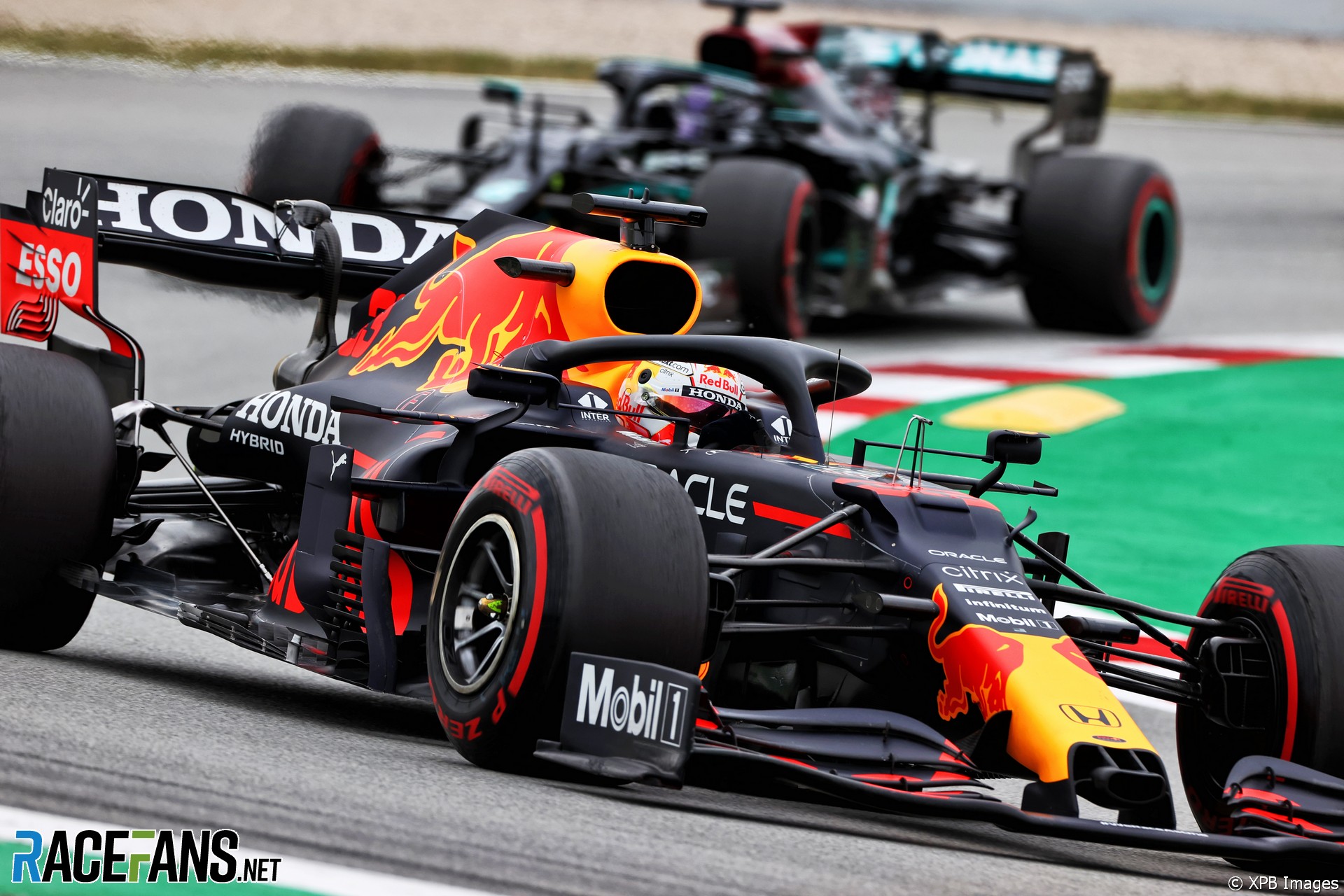 Four races into the 2021 F1 season, Max Verstappen has spent almost twice as long at the front of the field as his championship rival Lewis Hamilton.

That obviously contrasts sharply with the state of play in the championship. The Red Bull driver has a single win to Hamilton’s three, yet the reigning champion has led 75 laps to Verstappen’s 144.

On the fact of it that seems to prove Red Bull are throwing the championship away. After all that effort creating a car and power unit which can rival the dominant team of the V6 hybrid turbo era, they’re falling short when it matters. Is that view accurate?

Verstappen saw it differently when he climbed from his car at the end of last weekend’s Spanish Grand Prix and declared they were “too slow” to win. (In fact, he said it before he got out of the car as well.)

Last year it was undoubtedly the case that, the vast majority of the time, Red Bull were not quick enough to beat Mercedes on merit. The exceptions were the 70th Anniversary Grand Prix, where Mercedes rooted their tyres and Verstappen won as he pleased, and Abu Dhabi, where after a year of gradually closing the gap to their rivals, Red Bull finally put one over them.

This year the picture is more complicated. Red Bull have been especially competitive over a single flying lap: Verstappen took pole in Bahrain and arguably should have done so at Imola and Algarve too.

In the races, Mercedes tend to perform better. “I still have the feeling that we haven’t got the pace on Saturday that we should, but we seem to be quicker on Sunday,” said the team’s CEO Toto Wolff on Sunday evening.

Picking apart what we have seen over the opening races, there appear to be a couple of trends at work. One is that after being troubled by their performance in pre-season testing, Mercedes made progress, and were in much better shape once the serious business began.

“It’s fair to say that following the Bahrain test we were struggling a bit with the car,” explained the team’s head of trackside engineering Andrew Shovlin. “We hadn’t got it into a good window.

“The drivers were talking about how they didn’t have the confidence to carry the speed into the corners, the car wouldn’t even turn well into the corners, it was difficult to get it round some of the tight corners there and we were losing time. And then also the rear end was struggling when we got on the power, it was quite oversteery, so we had a lot to put right.”

Through “really hard work and fine-tuning” plus “numerous sessions in the simulator trying to get everything in the right window”, the team made strides. “When we went back to Bahrain, while we weren’t the quickest – that was clearly Red Bull and we saw that in qualifying – but we did have a car in a place where we could actually compete with them. We had improved the long runs significantly and that was really the thing that allowed us to win that first race in Bahrain.”

That progress has continued over the following races. “We also had an update kit on the car in Imola,” said Shovlin. “We are looking for small improvements really, there is so little between us and Red Bull that every few milliseconds we are chasing after.”

The race-by-race development is one trend. Another is the team’s performance in different weather conditions – Mercedes have thrived in cooler temperatures since returning to Europe – and on different tyre compounds. Mercedes’ car seems to work better on the harder rubber, which goes some way towards explaining why they usually look better in race trim these days than in qualifying.

This appears to be the continuation of a trend in cars which are closely based on last year’s models. During 2020 Red Bull seemed to prefer the softer rubber. They won the second event at Silverstone, when Pirelli brought compounds which were one stage less hard than those used for the previous race. Pirelli only brought their softest tyre, the C5, to two races last year: Verstappen won one (Abu Dhabi) and finished just seven seconds behind the winning Mercedes in Sochi.

That will make the coming races at a pair of venues which were dropped from last year’s schedule especially fascinating. Pirelli will bring its softest tyre selection for the first time this year to Monaco and Baku.

Tyre requirements aside, these are as different as two street circuits can get. While Red Bull have often been competitive in maximum downforce trim at Monaco, the long straights of Baku will be a real test of whether that Honda power unit can hold a candle to a Mercedes. The “bendy” rear wing Hamilton drew the world’s attention to at the Circuit de Catalunya may also help on the straights – new load tests targeting the design won’t come into force until after the race.

Red Bull may have been “too slow” to win at Catalunya, a Mercedes stronghold track where Pirelli always brings its hardest rubber. On paper they have cause to feel more confident about the coming races.

But if Red Bull are going to turn that 3-1 score-line into 3-3 by the first weekend in June, they need to be at their best. Throughout last season, when wins were too seldom a possibility, the refrain from Verstappen was that he’d “maximised” each weekend, often by getting in among the Mercedes.

The same claim can’t be made about some of his performances this year, even his sole win at Imola, where he lined up third on the grid in a car which was good enough for pole position. Victory in Bahrain started to get away from him when Red Bull let Mercedes get the jump on them in the pits. Track limits errors marked his weekend at Algarve. The upshot is Hamilton has a 14-point lead after the first four races and it’s no exaggeration to say Verstappen could be in the same position had he “maximised” all his opportunities.

After last weekend’s defeat, Red Bull CEO Christian Horner consoled himself with the view that as many as 19 races remain on the record-breaking 2021 F1 calendar (cancellations notwithstanding). “We need to make sure that we’re there for the second half, that’s been generally where we’ve been stronger,” he said.

That was certainly true last year. But Red Bull should pay heed to Ferrari’s experience the last time Mercedes were seriously tested.

Sebastian Vettel was leading the points standings halfway through both the 2017 and 2018 championships, yet a resurgent Hamilton and Mercedes took the titles. Many victory opportunities squandered by Ferrari were collected by Mercedes: Hamilton only took five pole positions in 2019, yet won 11 races.

Mercedes haven’t only won titles by being too fast for their rivals, and Red Bull aren’t behind in the 2021 contest solely because were “too slow” at one race. And while it’s far too early in a long season to start talking about ‘must-win’ races, the coming rounds look ripe for Red Bull to gain some ground.

98 comments on “Like Ferrari, Red Bull have found they need more than a quick car to beat Mercedes”