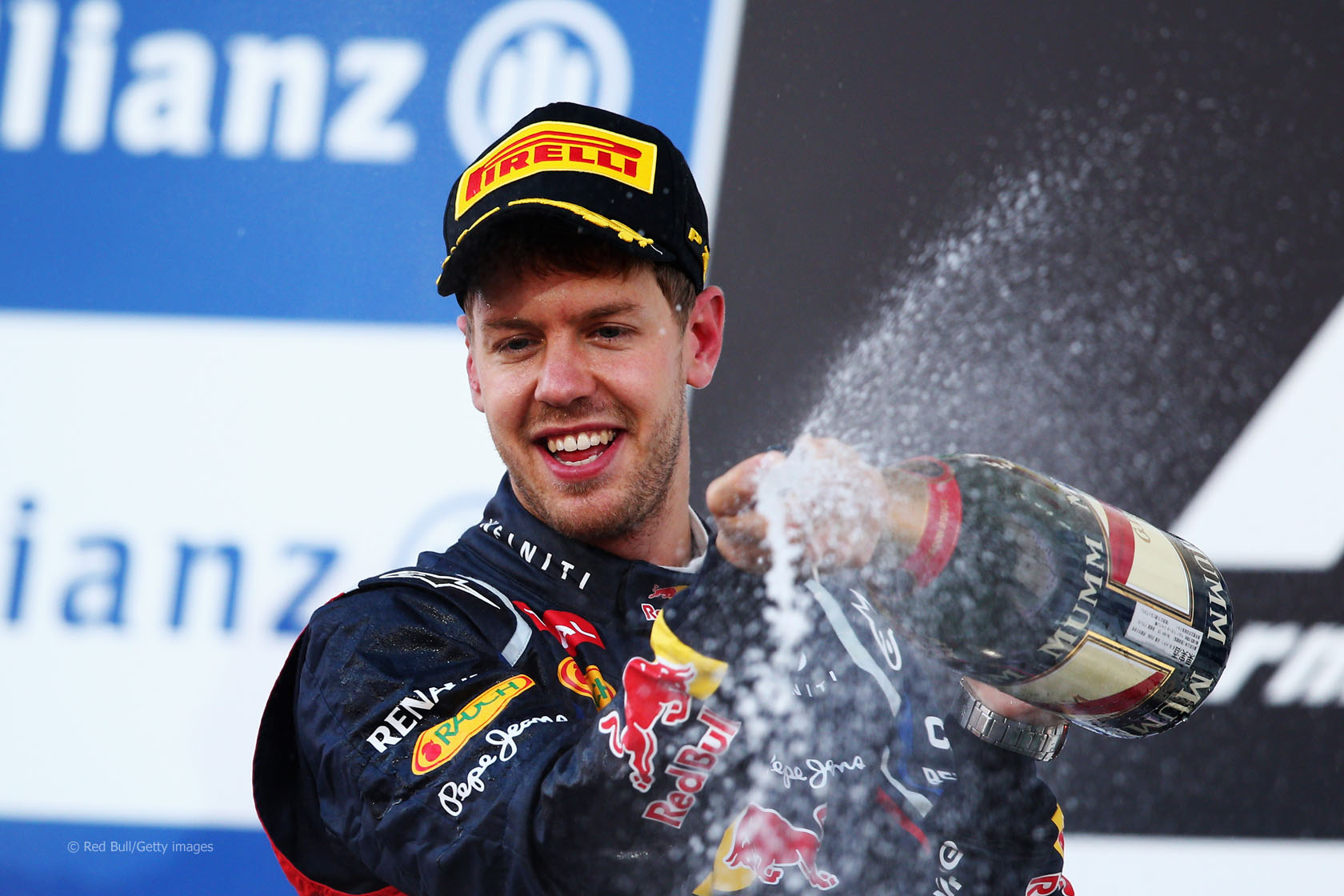 Sebastian Vettel dominated the Japanese Grand Prix, scoring a perfect result for the second time in his F1 career.

He became the 11th driver to score a grand slam on more than one occasion. Of the 873 races that have counted towards the world championship so far, 52 of them (5.9%) have resulted in grand slams: On Saturday Vettel set the 34th pole position of his career, moving him ahead of Jim Clark and Alain Prost. That leaves only Michael Schumacher and Ayrton Senna who have set more pole positions than the Red Bull driver, with 68 and 65 respectively.

In his four appearances at Suzuka, Vettel has never failed to start from pole position.

The last driver to start four consecutive races at the same track from pole position was Schumacher, who managed five in a row at the Circuit de Catalunya in the 2000 to 2004 Spanish Grand Prix. Schumacher did the same at Suzuka between 1998 and 2002.

Vettel’s 24th win of his career puts him level with Juan Manuel Fangio. It took the ‘Maestro’ 51 starts to reach that number, while this was Vettel’s 96th. He also became the first driver this year to win two consecutive races.

This was Vettel’s 13th fastest lap, giving him as many as Jacky Ickx, Alan Jones, Riccardo Patrese and team mate Mark Webber

Webber started alongside Vettel, giving Red Bull their first front row lockout of this season. They did so seven times last year and have started one-two on 16 occasions in total.

New faces on the podium

Felipe Massa ended a podium drought which stretched back to the 2010 Korean Grand Prix 36 races ago.

The longest ever gap between two podium finishes by the same driver is 129. That was between Alexander Wurz’s first podium in the 1997 British Grand Prix and second in the 2005 San Marino Grand Prix (awarded after Jenson Button was disqualified). However Wurz only started 50 of those races.

Earlier this year Schumacher scored his first podium in 100 races, of which he’d started 48.

Kamui Kobayashi reached the podium for the first time in his F1 career. Like Aguri Suzuki in 1990, he did so in his home race. The only other time a Japanese driver has finished on the podium was Takuma Sato at Indianapolis in 2004.

Kobayashi also achieved the highest qualifying position for a Japanese driver in their home race with third.

Schumacher started 23rd on the grid, as team mate Nico Rosberg did last year at Suzuka. Rosberg climbed to tenth and Schumacher alsmot repeated the feat. He finished 11th, within a second of tenth-placed Daniel Ricciardo.

Romain Grosjean became the first driver this year to receive a ten-second stop-go penalty following his collision with Webber. These are uncommon penalties – just three were handed out last year.

Vitaly Petrov received his first penalty of the year, a drive-through for failing to obey blue flags. That leaves just three drivers who have participation in every race weekend without receiving a penalty: Fernando Alonso, Daniel Ricciardo and Timo Glock.

Spotted any other interesting stats and facts from the Japanese Grand Prix? Share them in the comments.