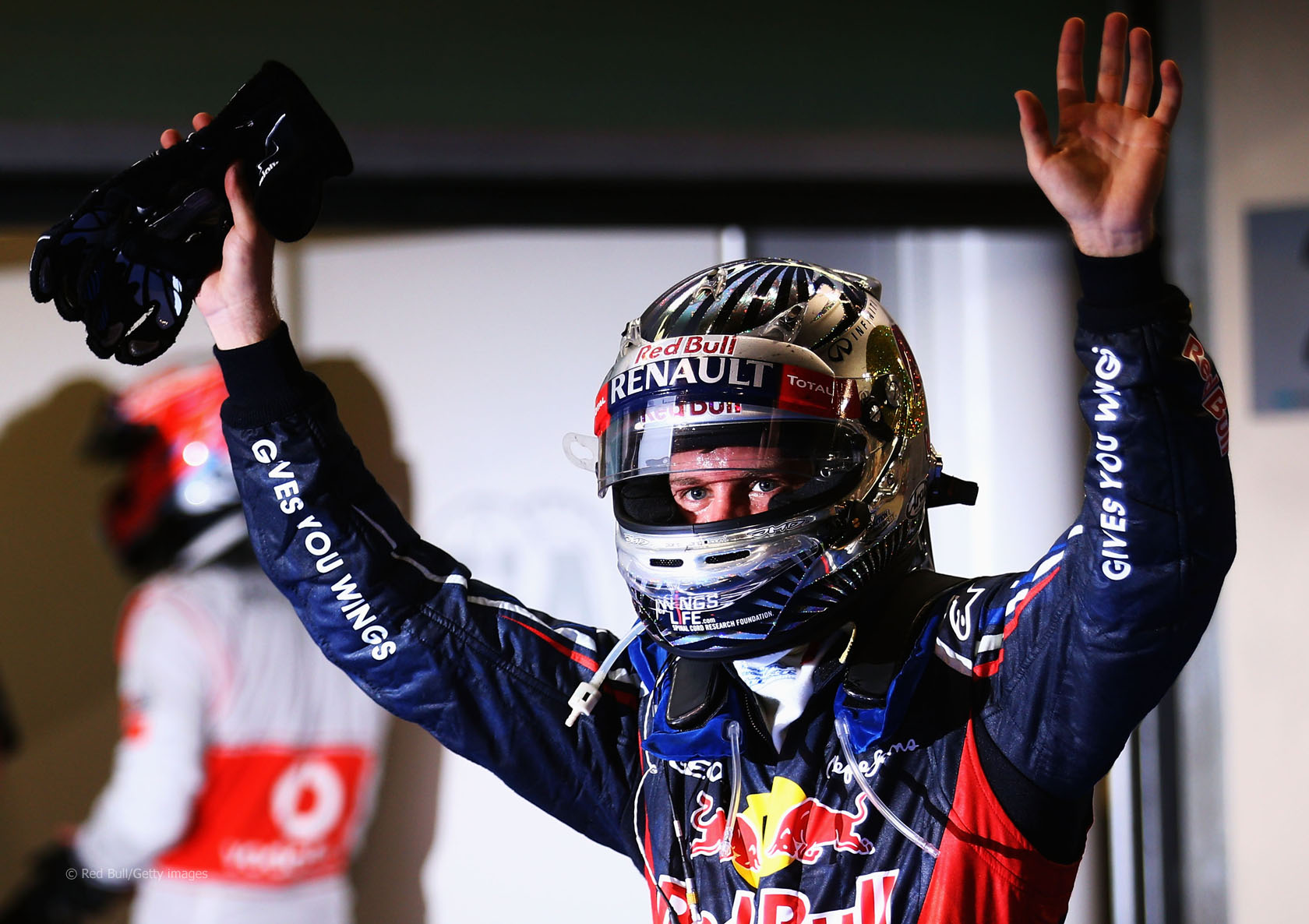 In the round-up: Lewis Hamilton believes Sebastian Vettel was lucky to get his podium finish in Abu Dhabi.

“Incredible how he came up from the pit lane. He must be the luckiest driver in F1.”

“Hats off to him today. That’s one of the best drives I’ve seen him produce and any doubters that said he can’t race, he’s definitely proved them very wrong today.”

“It?óÔéĽÔäós true that with Sebastian last, there was an opportunity to reduce the gap more significantly but it?óÔéĽÔäós equally true that our performance and our grid position could have seen us lose points in this Grand Prix. I repeat, they have the quicker car, we have the better team.”

“I have to look and see if did anything wrong but he should be watching me. Everyone was doing the same thing, it’s exactly what you do under the safety car.”

“Mercedes’ solution at the rear will [still] be allowed [in 2013], as it is totally passive and relies on F-Duct-style air pressure switches. Even so, team principal Ross Brawn has suggested it is unlikely we will see this system on the 2013 Mercedes.”

“Vitaly Petrov pays for his seat at Caterham even though he is very quick, but may yet be ousted by Dutch GP2 racer Giedo van der Garde, who could bring a decent budget, or his rival Luiz Razia from Brazil. Spaniard Dani Clos and Italian GP2 champion Davide Valsecchi are also trying to make deals work.”

“We saw some numbers going down and in order to save the engine at last, save the pumps in between etc, we decided to stop the car, convinced that we had enough fuel in the car to provide a sample but, as I said, for some reason we didn’t have enough fuel so I don’t know what happened. There must have been a mistake somewhere which was a big hit, like I said, but I’m sure we will learn from that and it won’t happen again. I think we have done the exercise a lot of times, we know the rules. As I said, we are talking two hundred millilitres that were missing.”

“The Renault engineers had spotted dropping fuel pressure and, according to sources, the message to stop was passed to Vettel?óÔéĽÔäós engineer after some 15 seconds.”

“I’m terribly sorry for using the wrong word on the podium today and I’m sorry if I have offended anyone who was watching. In the heat of the moment, I didn’t use the right words and I apologise. I’ll do it better next time.”

“We were very close to organizing a French Grand Prix in Paris a few years ago and now I’ve been asked to advise and see if everything is correct.”

Some whinges about Vettel's "luck". Little different to Button at Canada last year, Schumacher at Spa last year, Alonso at Monaco in 2010…

A sensible perspective on the debate over the merits of Vettel’s drive in Abu Dhabi from Broom (@brum55):

You have to give him credit though, begrudgingly. To get 3rd from 24th was always going to rely on fortune falling his way but he took it just like Alonso, Schumacher, Hamilton and countless others have done in the past. If you micro-analyse every great F1 performances you can always find that luck plays a massive part. But it was a thrilling performance.
Broom (@brum55)

Da Matta was dropped halfway through his second season with the team and later returned to Champ Car. However he suffered severe head injuries when his car struck a deer during testing at Elkhart Lake in 2006. Since then he has competed in closed-cockpit series.

226 comments on “Hamilton: Vettel “luckiest driver in F1” after podium”