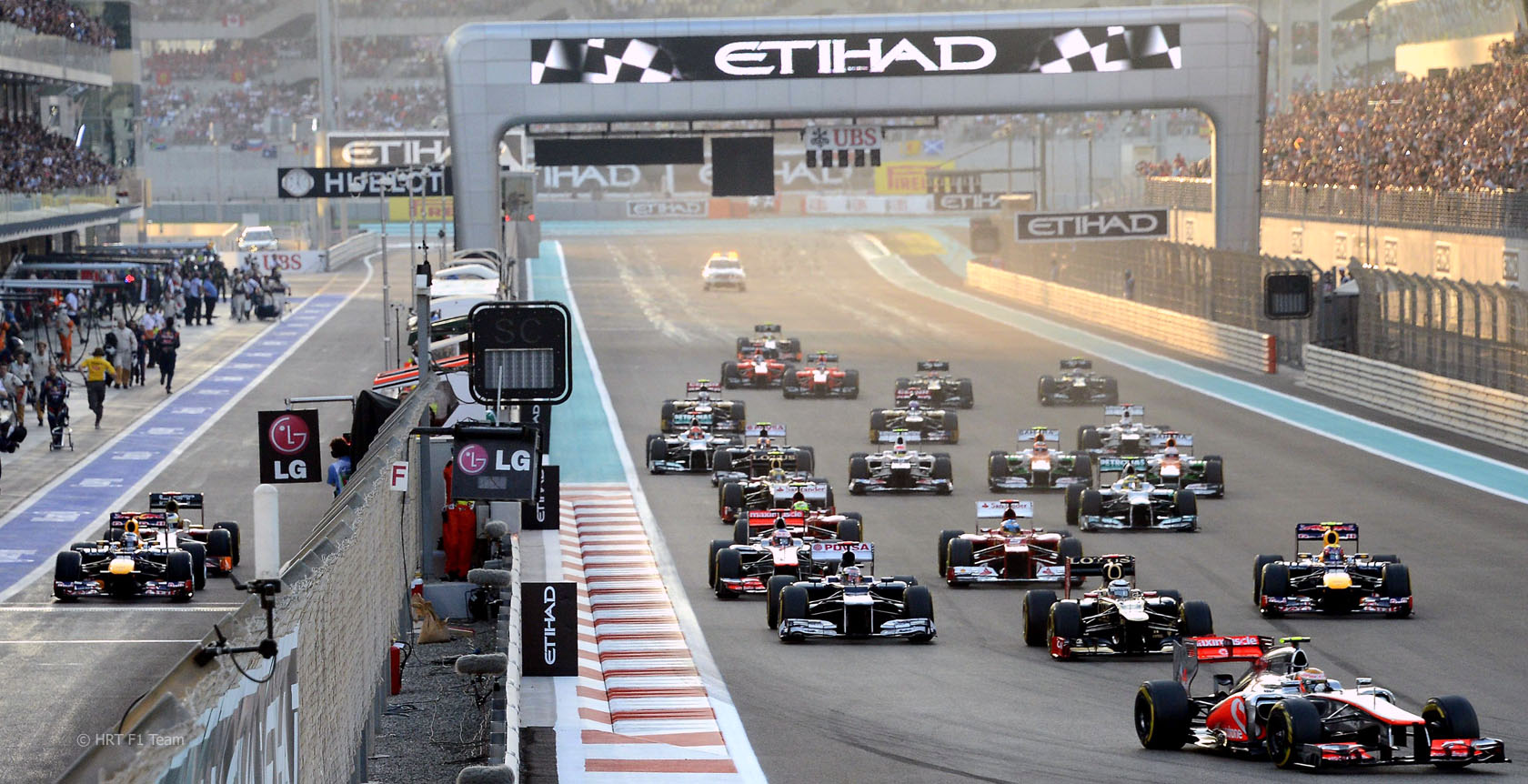 The Abu Dhabi Grand Prix was rated the third-best race since the beginning of 2008 by F1 Fanatic readers.

An average score of 8.854 made the race the most popular of the year so far. It ranked only behind the 2011 Canadian and 2011 Chinese Grands Prix since we began compiling the scores.

The previous three races at Abu Dhabi had managed an average score of 6.1 between them, so the exciting race at Yas Marina came as something of a surprise:

What is it with 2012? The two absolute worst tracks on the calender has produced some of the greatest races of the year? How is that possible?

The DRS here does go to show that this track is fundamentally flawed. Even with very long DRS zones it was still barely possible to overtake, but at least it was that. Barely possible. Every DRS pass felt real, the drivers had to fight, they had to take the duel right into the corner and try to gain control over the position. So maybe the tracks with the worst overtaking spots is the track that work the best with DRS?
@Mads

I think everyone is going to be baffled that Abu Dhabi of all places produced such an exciting race. […]

I think if a formula for a perfect F1 race were to be devised then, lead changing hands, battles for first, second and third, few good overtakes, some silly mistakes thrown in with a safety car and some hilarious radio chatter should be it. That said all of the champions drove like champions.
@MahavirShah

I can honestly say there was never a boring moment. We had chaos at the start, and following that, loads of nice battles near the top of the order. The horrific shunt between Rosberg and Karthikeyan paved the way for a bunched-up field, while Hamilton?óÔéĽÔäós retirement and the many collisions made for a massive dose of unpredictability. There were innumerable tangles about the midfield ?óÔéĽÔÇŁ Vettel?óÔéĽÔäós run-in with Ricciardo, and the chain accident of Perez and Webber. Not the best racing per se, but undoubtedly exciting.

The closing stages of the race sealed the deal. You had four world champions duking it out ?óÔéĽÔÇŁ Alonso pushing to catch Raikkonen, Button and Vettel dueling professionally. The tension was unbearable before and after Vettel?óÔéĽÔäós pass on the McLaren, while Alonso chasing down Raikkonen had me on the edge of my seat.

And to cap it all, a feel-good victory ?óÔéĽÔÇŁ Raikkonen finally clinching that elusive comeback win with a very measured drive, and some hilarious team radio moments along the way. Never thought I would give a perfect ten to an Abu Dhabi race, but the last two hours just proved me wrong.
Bob (@Bobthevulcan)

That was one of the greatest races I?óÔéĽÔäóve ever seen. Fantastic race by Vettel (I think he has well and truly silenced the critics now saying he can’t race from the back), some fantastic battles throughout the field and a very tense finish.
Max Jacobson (@Vettel1)

Drama all the way, weird incidents, a massive drive by Vettel, helped by others’ misfortunes but still.

And best, best of all: Raikkonen’s radio messages. Where were those in India? We need them.
@Fer-no65

@MattB noted the bad language on the podium and wondered if Kimi Raikkonen and Sebastian Vettel might get in trouble for it:

From the Foreign and Commonwealth office on Abu Dhabi: “Swearing or making rude gestures is considered an obscene act and offenders can be prosecuted. Offenders have, in the past, received six-month jail sentences for such acts, and some have been deported.” So Vettel and Raikkonen ?óÔéĽÔÇŁ six months in the Middle East for you then?
@MattB

A few suggested that while the Grand Prix was entertaining, it fell short as a sporting spectacle:

Looking at the real racing: there was none. At one moment, I genuinely thought I was watching the local fancy fair bumper car competition, or worse NASCAR. It began at the start: I think that was Di Resta?óÔéĽÔäós error, because he was on the middle of the track with three cars to his right ?óÔéĽÔÇŁ give some space, would you? Rosberg?óÔéĽÔäós shunt was frightening to watch. Webber was making a mess of it, and I think I?óÔéĽÔäóll just keep my mouth shut about the Perez/Grosjean mess. […]

So, no real racing, but a lot of excitement. And though I?óÔéĽÔäóm a bit disappointed as a racing fan, I couldn?óÔéĽÔäót resist giving this one a 10.
@Andae23

Too many dumb mistakes by too many drivers (or even by wrecking-crew Webber alone) and no scrap for first (plus the retirement of the guy who should have won).
Troutcor

And while @MazdaChris gave the race ten out of ten he had some criticisms about the coverage:

The only thing which I did think could have been better was the direction of the coverage.

During the opening few laps, Vettel managed to make his way up to 14th, and we saw pretty much none of it. All because of this unnecessary trend of showing us 50,000 replays of the start. I really don?óÔéĽÔäót understand why they do this while there?óÔéĽÔäós racing going on on-track, especially when we know we?óÔéĽÔäóll get to see a bazillion replays of the start in the post-race analysis.

At most, I think it?óÔéĽÔäós something they could play as filler when the safety car is out, but to deny us the spectacle of Vettel cutting through the field in favour of showing us people driving away from the grid for half an hour is just unforgivable.
@MazdaChris