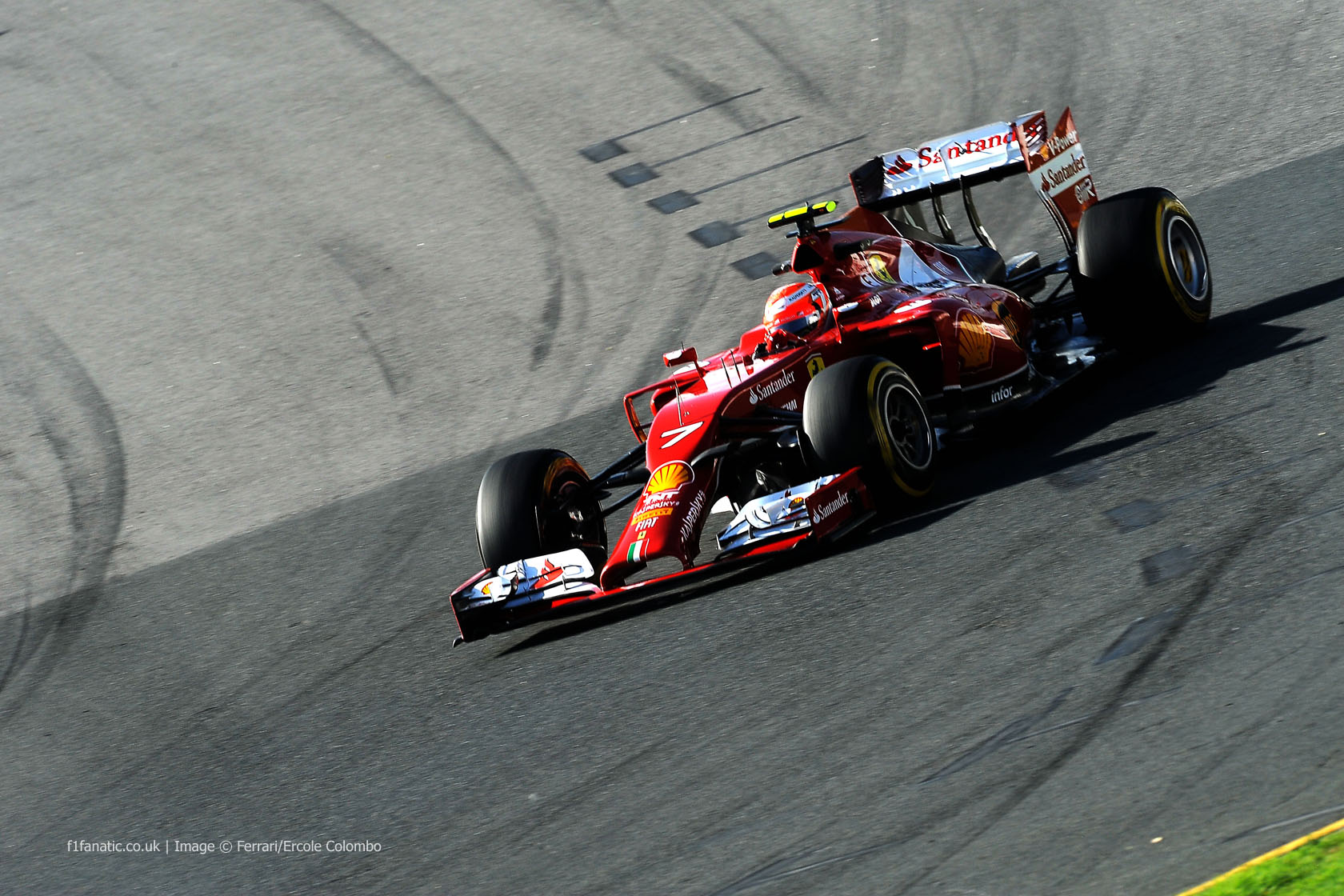 In the round-up: Ferrari team principal Stefano Domenicali says Kimi Raikkonen is not happy with the balance of his car yet.

Stefano Domenicali: “It’s like the cat has to bite the tail…” (Adam Cooper’s F1 Blog)

“I think we need to help Kimi in trying to find the right balance with the car, helping him because he deserves that. I think there was an improvement during the days.”

Walker furious at the lack of GP ‘screams’ (The Age)

“I was absolutely delighted with the whole weekend, but I was not too happy with the sound. We are resolving that with Bernie. It’s clearly in breach of our contract. I was talking to him last night [Sunday] and it’s not what we paid for. It’s going to change.”

“We give the teams a percentage of the revenue we receive. So if we are receiving less revenue, whatever the case may be, certainly the teams wouldn’t get as much. So it’s going to cost them.”

“This weekend has been an emotional one for me, and the support I’ve had has been brilliant. That being the case, it would have been a real bonus if I could have celebrated my third place from the podium, alongside Nico and Kevin. But I really feel for Daniel, who drove a great race in his first race for his new team, in front of his home crowd.”

“On the back of clarifications made by the FIA earlier this month – making it clear that the fuel-flow rate being produced by the sensor would be the one that determined conformity with the regulations – no other team went down the Red Bull route and deliberately ignored the sensor reading.” “‘According to our analysis,’ said Red Bull’s Christian Horner, ‘we are losing a second per lap down the straights.’ One second per lap appeared to be the advantage Rosberg enjoyed over the Renault-powered Red Bull here. Rosberg admitted that, having earlier in the weekend worried about the fuel consumption, in the race it was not a concern. “I could see from quite early in the race that it wasn’t going to be a worry.”

“Daniel [Ricciardo] did not gain any advantage and that will be proven by Red Bull in their appeal.”

“‘I don’t care if people like F1 or not, but let’s stop pretending it’s about the economy. People have a go at me and say ‘well, we subsidise the opera’. Well yes, we probably do, but the difference is the opera doesn’t claim it is in the best economic interests of Australia.”

“The new 2014 power units mean all the teams have had to increase their cars’ radiator cooling, leading to some quite complex layouts. Toro Rosso’s is unique.”

“‘To be quite honest we don’t know what our parts are used for half the time,’ says Alan Rollason, managing director of ACE, a Shropshire company that makes parts for high performance engines.”

“The 11-hour time difference did at least allow writers to wait for the stewards’ decision without worrying about missing the early editions of their paper, as would have been the case had the race been in Europe. As a result, all of the Monday dailies carried the story. The various interpretations literally made interesting reading.”

“Michael, we think and talk about you and your family every day, and we anxiously await good news from this, your greatest challenge of all. You have all of our support and best wishes in these dark days and we desperately hope for and look forward to happier times with all of our hearts. The Brundle family.”

“Yes, a Sky gain of 73k is great for them, but if BBC loses nearly 200k, it eradicates whatever gain Sky is made.”

Revolutionising racing (The Way It Is)

“It will be fascinating to see how F1’s new world order takes shape after Ecclestone finally retires or is removed from the scene. Most longtime observers believe a gruesome power struggle will ensue among the team owners, CVC and the FIA that’s likely to do the sport more damage than good.”

Bernie is no fan of the noise either, however. And Ron is an old ally. Not that I'm looking for an agenda..

Red Bull’s dramas aside, how competitive are the world champions this year? Thoughts from @Estesark:

I’m not sure where Red Bull fit into the pecking order after all this.

Vettel had a software problem on his car, which should be resolved easily enough. Ricciardo appeared to have no problems at all – and excellent pace – until the stewards announced their decision to disqualify him.

I don’t understand why his team chose to ignore the rulebook, but if his fuel rate monitor really was faulty, perhaps they anticipated getting a working one for Malaysia and chose to use the race as a testing session. If that is the case, they could be much closer to the front than most people anticipated. On the other hand, if their monitor wasn’t faulty, then Ricciardo’s pace was misleading and they could be anywhere.

My instinct tells me it’s the former. If the team can sort out its reliability issues then more podium finishes are well within their grasp for the next few races.
@Estesark

On this day 20 years ago Benetton confirmed Jos Verstappen would be Michael Schumacher’s team mate for the first race of 1994 in Brazil, JJ Lehto having not recovered sufficiently from his neck injuries.

Verstappen only had 52 race starts to his name at the time but Benetton had fended off interest from McLaren to sign him as their test driver.

123 comments on “Raikkonen not happy with balance yet – Domenicali”