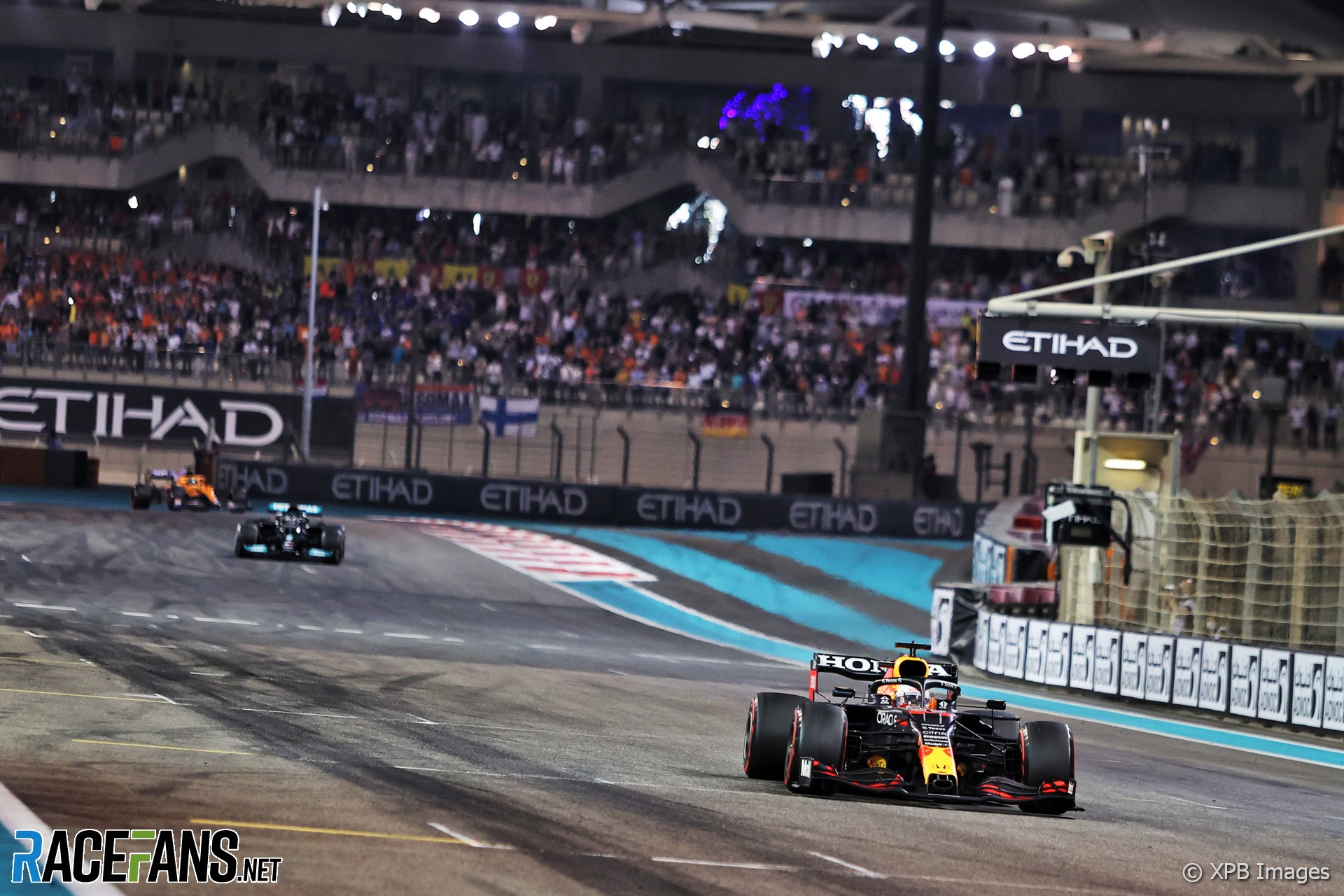 Max Verstappen has won the Abu Dhabi Grand Prix and clinched the 2021 Formula 1 world championship in a sensational conclusion to the season.

The race began and ended in controversy. Lewis Hamilton took the lead from pole-winner Verstappen, who swiftly responded.

Verstappen sent his Red Bull-Honda into an open gap at turn six, forcing Hamilton to take evasive action through the run-off. Hamilton rejoined the track with a one second advantage.

Over furious Red Bull protestations, race control ruled the incident would not be investigated, determining that Hamilton had slowed down enough to give back any lasting advantage he would have gained by going wide.

From there, Hamilton began to pull out a margin on his medium compound tyres, while Verstappen suffered with degradation on the soft tyres. The Red Bull driver pitted on lap 13 for a new set of hard tyres, and Hamilton was brought in to cover on lap 15. Sergio Perez in the second Red Bull cycled to the lead.

Driving to save his team mate’s championship prospects, Perez defended his position aggressively to keep Hamilton at bay, slashing the Hamilton advantage down to just over a second. However, Hamilton was able to pull away incrementally, bringing his lead back up to around four seconds.

Antonio Giovinazzi’s car lost drive and came to a stop at the exit of turn nine, resulting in a Virtual Safety Car. This gave Verstappen the opportunity to pit for a second set of hard tyres, hoping to use strategy to retake the lead. Verstappen needed to gain about a second per lap in order to catch Hamilton, but could not consistently gain enough time to bring the gap down to under ten seconds.

In an incredible twist, Nicholas Latifi spun and crashed exiting turn 13, resulting in a full safety car intervention. Verstappen pitted for a fresh set of soft tyres, setting the stage for one final lap of green flag racing.

Following pressure from Red Bull on the radio, race control made a late call to allow some of the lapped cars to overtake Hamilton before the restart. Suddenly, Verstappen was sat behind his rival with much fresher tyres.

On the final lap, he made the lunge of his racing life to take the lead at turn five. Hamilton had one final chance to slipstream past and take the lead around the outside of turn nine, but could not take the position back, and Verstappen drove away to the race victory and his first drivers’ championship.

Amidst the drama of the incredible scenes that decided the championship, Perez retired under the last safety car intervention, which clinched an eighth consecutive constructors’ championship for Mercedes. Carlos Sainz Jnr was elevated to third, completing the podium for Ferrari.

Yuki Tsunoda finished fourth, a career best for the rookie driver, ahead of his AlphaTauri team mate Pierre Gasly in fifth. In his last race with Mercedes, Valtteri Bottas finished sixth, ahead of Lando Norris, who recovered from a puncture to finish seventh.

The Alpines of Fernando Alonso and Esteban Ocon finished eighth and ninth, ahead of the second Ferrari of Charles Leclerc in tenth.