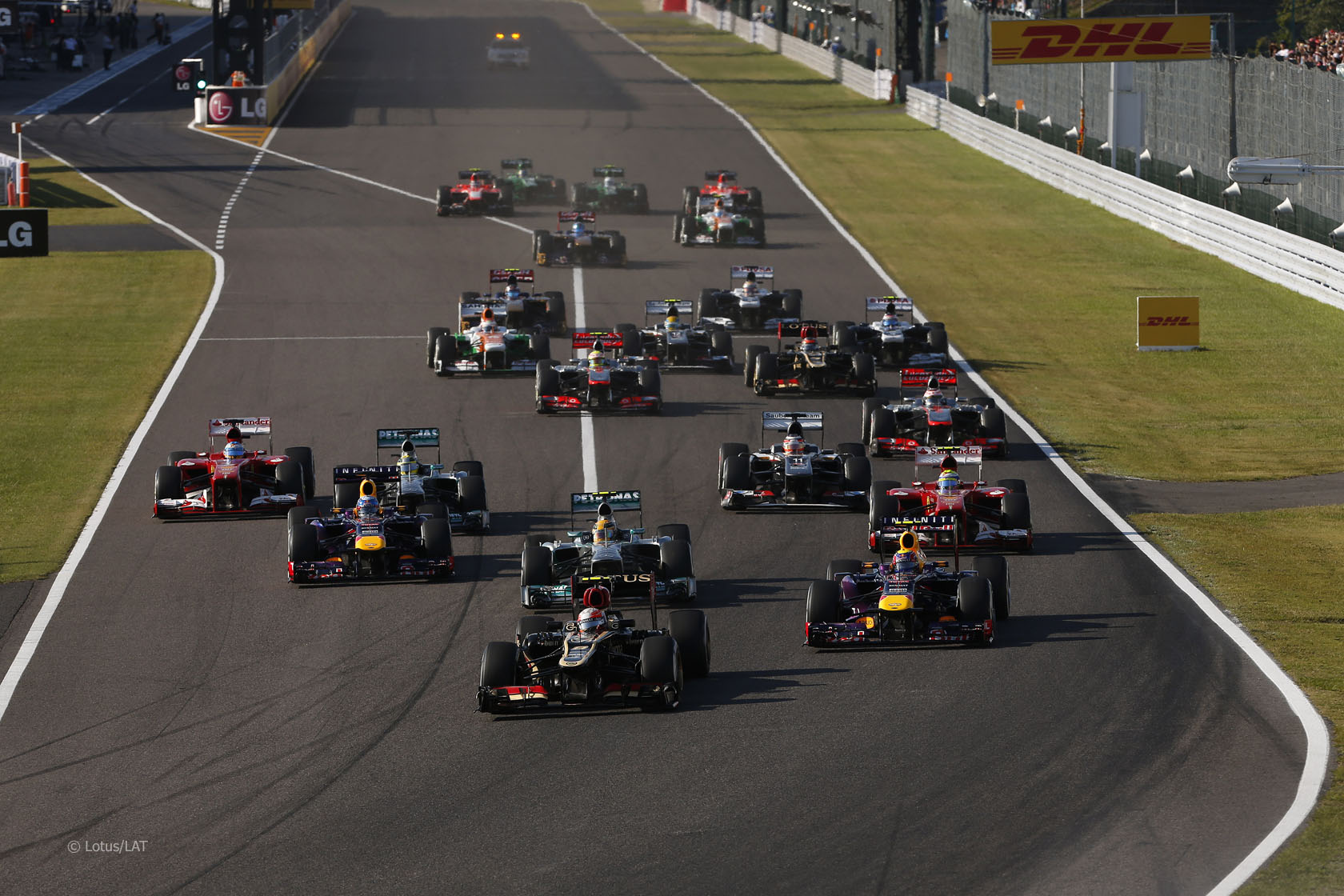 Which F1 driver was the best performer during the Japanese Grand Prix weekend? Sebastian Vettel – Didn’t take pole position for the first time at Suzuka but had his KERS been working he would probably have found more than the tenth of a second that separated him from Webber. From the outset he played the tyre management game to allow him to run a short, aggressive final stint. When the crunch time came he wasted no time passing Grosjean to clinch a satisfying win which puts the championship destiny almost beyond doubt.

Mark Webber – Webber hasn’t always been close enough to Vettel this year to take advantage when his team mate has a problem but he was at Suzuka and pushed his team mate hard for the victory. Said he was “surprised” to be switched to a three-stop strategy but was able to use his superior speed in the final stint to pass Grosjean. Had he done so more quickly he could have gone after his team mate.

Fernando Alonso – Held his hands up after being beaten by Massa in qualifying and admitted he hadn’t been quick enough. His race pace was better but he spent the first stint stuck behind Massa. He took advantage of traffic in the second stint to get past Massa, then later demoted Hulkenberg when the Sauber driver’s tyres began to drop off. That gave him fourth place, and he felt no more was possible under the circumstances.

Felipe Massa – Would Massa “drive for himself”, as he told Brazilian media after being dropped by Ferrari, or would he “definitely help” his team mate as Luca di Montezemolo insisted? That was answered in the first stint when Massa repeatedly ignored Ferrari’s instructions to let Alonso through, delivered through the radio code “Multifunction strategy A”. Hulkenberg took advantage of the situation to jump both Ferraris, then Alonso finally found a way past his team mate, after which Massa picked up a penalty for speeding in the pits and fell to tenth.

Jenson Button – Set the same time to within a tenth of a second on three separate occasions in qualifying and felt he’d wrung all there was from the MP4-28. Driving to the grid he chose to reduce the front wing angle on the car but quickly regretted the decision, suffering understeer which wasn’t cured until the last stint. Held off Massa for ninth.

Sergio Perez – Crashed at Spoon during second practice, which he said was his mistake as he’d touched the artificial grass on entry to the corner. Narrowly missed Q3 but started well, only to lose time when Rosberg came out of the pits immediately in front of him. Like Button he had a slow pit stop as well. His left-rear tyre was punctured in slight contact with Rosberg, which killed his chances of scoring points. Kimi Raikkonen – Crashed in Friday practice – for the second weekend in a row – missing valuable race simulation time. Raikkonen’s been unhappy in qualifying since the new tyres were introduced and although he made gains in Japan he remained in the lower reaches of the top ten. Had wheelspin at the start which cost him places but he made progress from there on. A weekend which started poorly ended up with a brilliantly-judged pass on Hulkenberg for fifth place on the outside at the chicane.

Romain Grosjean – Surely his best F1 performance to date with a solid qualifying effort followed by an outrageous start from which he emerged as an unlikely threat to Red Bull. Led comfortably for almost half of the race and did well to hold off Webber as long as he did before taking another podium finish.

Nico Rosberg – An unsafe release from the pits dropped him back into the pack where he ended up scrapping with Perez. Like his team mate in Korea he spent the latter part of the race stuck behind a Sauber, Gutierrez limiting him to eighth.

Lewis Hamilton – The merest touch of his right-rear tyre against Vettel’s front wing was enough to give him a puncture as he dived between the Red Bulls off the line. From looking likely to take second at the start he was soon out of the race. Nico Hulkenberg – Beat Alonso and Raikkonen in qualifying but couldn’t keep them behind in the race. However he held them off as long as he could until his tyres began to give up.

Esteban Gutierrez – Points looked unlikely when he lined up 14th on the grid but a superb start, gaining five places, brought him into contention. Gave away a position to Raikkonen though it was one he was always going to struggle to keep.

Paul di Resta – Ended his strong of retirements and took 11th, unable to resist Button in the latter part of the race. Still he was happy with the improved balance of the Force India.

Adrian Sutil – A crash in final practice forced him to change his gearbox, and after failing to escape Q1 he started last. Up to 16th by lap one, he gained two more places by the end of the race despite being passed by both Toro Rossos in one lap later on.

Pastor Maldonado – Went off twice in practice, but the first spin in Q1 was due to a wheel which hadn’t been attached properly and fell off. The stand-out moment of Maldonado’s race was his desperate lunge down the inside of Bottas on his final lap, signalling his eagerness not to finish behind his team mate.

Valtteri Bottas – Impressively out-qualified Maldonado on his first race at a real drivers’ circuit. But his tyres went off badly in the final stint, losing four places in the last three laps. Jean-Eric Vergne – Knocked out in Q1 after a bizarre incident when he left the pits with both rear brakes locked – he thought his engine was down on power – which then caught fire. An early pit stop in the race didn’t work out for him as he became stuck in traffic. But three-stopping gave him the benefit of fresher tyres later in the race, allowing him to pass the Williams drivers and Sutil.

Daniel Ricciardo – Tried to make an alternative strategy work, starting on the hard tyres. But he became the latest driver to be penalised for completing a pass by going off the track on the outside of the corner, which he was deeply unimpressed with. His drive-through penalty confined him to 13th place.

Charles Pic – Already carrying a ten-place penalty into the race weekend, Pic committed much the same infraction he had in Korea – passing a red light without stopping – and earned an unprecedented drive-through penalty which was declared before the race had begun. Despite that he was quick enough to beat the sole surviving Marussia home.

Giedo van der Garde – Collided with Bianchi at the start, putting both out. “I was squeezed between both the Marussia cars and had nowhere to go,” he said. “I lost my front wing in contact with Bianchi and then the car went straight off and into the wall.”

Jules Bianchi – Hit the barrier at Degner 2 in first practice when his arm got caught against the side of the cockpit. Unfortunately that ruled him out of second practice as well. Beaten in a straight fight by his team mate in qualifying for the first time, he was taken out on lap one of the race. “As I turned into the first corner on the opening lap, van der Garde hit my rear wing which pushed me off track and into the gravel.” A wasted weekend in which he completed just 32 laps, most of which in Saturday’s hour of practice.

Max Chilton – Out-qualified Bianchi on merit for the first time the year. But despite Pic having a drive-through penalty he was caught and passed by the Marussia seven laps from home after his tyres began to go off.

Who was the best driver of the 2013 Japanese Grand Prix weekend?