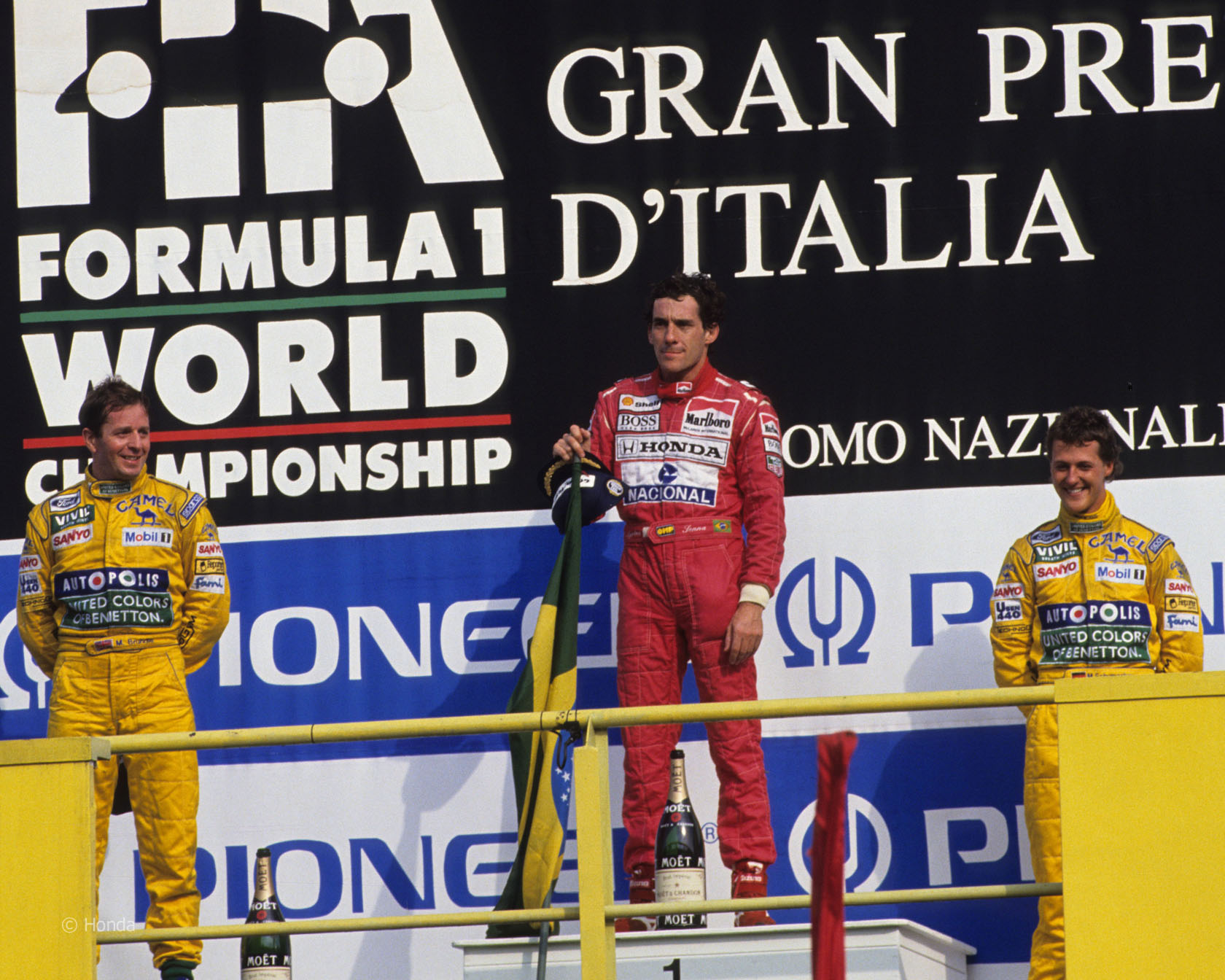 Lewis Hamilton scored his 20th career victory and his first Italian Grand Prix win. He now has as many wins to his name as Mika Hakkinen.

This was the third consecutive win for McLaren. The last time they managed that was in 2008 when Hamilton won the British and German Grands Prix, and Heikki Kovalainen claimed victory in Hungary.

Hamilton set his 23rd pole position which moves him back in front of Fernando Alonso, needing one more to break into the all-time top ten.

With Jenson Button second on the grid, this was McLaren’s 62nd one-two, moving them ahead of Williams. Only Ferrari have more, with 70, though they haven’t locked out the front row since the 2008 French Grand Prix.

Red Bull failed to score for the first time since the 2010 Korean Grand Prix, ending their 33-race streak of points finishes.

Alonso’s 80th podium puts him on a par with Ayrton Senna. Alonso took 189 races to reach 80 podiums whereas Senna made 161 career starts. They are tied in third place for most podiums behind Michael Schumacher (155) and Alain Prost (106).

Alonso has finished on the podium in all three of the Italian Grands Prix he has started for Ferrari.

The first-lap crash at Spa brought Alonso’s streak of consecutive points finishes to an end. Kimi Raikkonen is now the leading driver in terms of successive points scores, having racked up ten in a row since the Bahrain Grand Prix.

Narain Karthikeyan also out-qualified Pedro de la Rosa for the first time this year. Karthikeyan hadn’t out-qualified a team mate since the 2005 Chinese Grand Prix, though to be fair he did not race from 2006-2010 or during half of 2011.

Sebastian Vettel was classified in last place for the first time since the 2008 Turkish Grand Prix.

In another parallel with 2008 a Ferrari-engined car led at Monza but not in a Ferrari chassis. This time it was Sergio Perez’s Sauber – on the previous occasion it was Vettel’s Toro Rosso, which went on to win.

No Italian in the Italian Grand Prix There was no Italian driver on the grid for the Italian Grand Prix for the first time since 1969.

This year there wasn’t even an Italian driver participating in free practice, however Ma Qing Hua became the first Chinese driver to participate in an official F1 weekend with HRT. I wonder whether in years to come we’ll look back on that as a sign of the changing times.

Will Italy have a driver in F1 again soon? Davide Valsecchi moved back into the lead of the GP2 championship over the weekend.

However the only two drivers in GP2’s seven-year history to finish in the top two places and not gain a place in F1 were the two Italians who did so: Giorgio Pantano (2008 champion) and Luca Filippi (2011 runner-up, who won the feature race on his return to the category on Saturday).

“Making it to 100 Grands Prix is something very special,” said Pedro de la Rosa ahead of the race. But had he really hit a century?

This was in fact de la Rosa’s 112th participation in an F1 race weekend. However that includes 12 drives for McLaren in free practice only during the 2005 season.

Furthermore de la Rosa also did not officially start the 2000 Monaco Grand Prix or the 2010 Malaysian Grand Prix. In the former the original start was aborted and de la Rosa did not start the new race due to damage. And his car broke down on the way to the grid at Sepang two years ago.

And on top of that he failed to qualify at Melbourne this year. So while we can call this the 100th race that de la Rosa was entered for with the intention of starting it, it was in fact only his 97th Grand Prix start.

His F1 career has been spread across 14 years. De la Rosa made his debut with Arrows in the 1999 Australian Grand Prix: Vettel might not have had much to celebrate at Monza but he did mark one milestone with 50 tally marks on top of his helmet.

What was he commemorating? Why, his fiftieth different helmet design, of course…

Spotted any other interesting stats and facts from the Italian Grand Prix? Share them in the comments.